Exercise One - The Guild of Gentleness 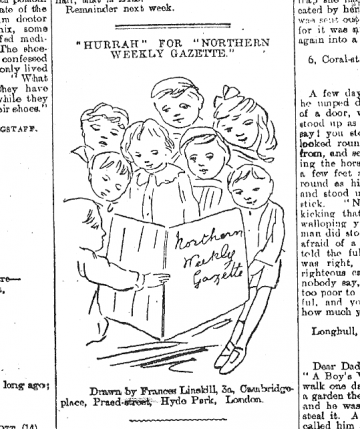 The following extract is taken from the children’s section of the Manchester Weekly Times, a newspaper published in the city of Manchester, in north-west England. One feature of the children’s column was a club called the Guild of Gentleness run by ‘Uncle Oldman’, who wrote about how he was assisted by his fairy called Laughaway. These letters were published on page six in this eight page newspaper. What follows are four letters that were sent in by members of the Guild and that were published in the newspaper on 21st June 1895.

The last letter I wrote to you I sent a penny for a card to become a member of your Guild. I have a little kitten; its fur is white and black. My dog Dash has died, so my mother bought me a kitten, and so now we have three kittens; but Kitty and Tabby do not like my little kitten. With love to Aunt Mary, Laughaway and yourself, I am your loving nephew.

The last letter I wrote to you I sent a penny for a card to become a member of your Guild, and have not received it. I wish very much to become a member of your Guild. We have had a very cold winter. I have been very sorry for the little birds. I have given them all of the crumbs that I could get. We have had some fine sliding and skating. I think it is very wicked to be cruel to animals. I saw a cat last Monday in the road, and just then a cab came along and the wheels went right over it and killed it before it could get away. I will send a penny for you to send Ernest’s and my card. With love to Aunt Mary and yourself, I am your loving niece.

It is a long time since I wrote to you last, but I have read your column regularly. Last week but one, Daniel Adamson and Co. (the firm I work for), had an employee trip to Blackpool. We set out in a special train from Hyde Junction at 7 a.m. and reached Blackpool about 9.30. We spent the fore-noon on the sands, the piers, the promenade, and in the town itself. At 12.30 we went to Raike’s Hall Gardens, and had a very good dinner. In the afternoon we went to ‘Uncle Tom’s Cabin,’ saw ‘Niagara,’ and several other attractions. In the evening we caught the 7.40 special back to Hyde Junction, after a most enjoyable day. I am sending you an essay for the competition. I am afraid my certificate and enrolment form must have been mislaid, as they have not arrived yet. Please will you try to get them for me? With best respects to Aunt Mary, Laughaway, and yourself, I remain your affectionate nephew.

I heard a tale about a horse the other day which I will tell you. The horse, whose name was Jack, was in the habit of taking a glass of beer everyday with his master. One day they gave him more than a glassful, and it made him feel very ill. Ever since then Jack would not stop near a public house, but always went running on. I think it would be better if others followed his example. I am sending you a little poem which I composed a few days ago called ‘Spring’:–

My heart with peels of gladness rings;

The leaves are coming on the trees;

There blows a soft spring breeze.

The flowers are coming up again;

The ivy on the window pane,

It is growing thick and fast;

We are glad that winter’s past.

In May, the little queen

Doth glide from door to door,

That Spring is here once more.

With much love to Laughaway, Aunt Mary, and yourself – I remain your loving niece,

After you have read through the extract, click below to find some questions to start analysing what we can learn from this text:

Using only the information provided in the extract above, try to answer the following questions:

2) Can we infer anything from this extract about the family backgrounds and identities of the four letter-writers?

3) Why do you think these young people chose to write to ‘Uncle Oldman’? Can we learn anything about understandings of childhood from this extract?

4) What do we know about ‘Uncle Oldman’? Why do you think family terms, like uncle, aunt, niece and nephew, were used in the column?

When you have had a go at finding precise evidence to answer these questions, click here to move on to the next stage of interpreting the source:

You are now ready to draw together all of these ideas to answer this final, larger question:

What does the extract tell us about this society and the authors’ views of it?

Think about how to order your ideas to answer the question most clearly and directly. Always provide evidence from the extract to support each point you make. Think also about what we cannot learn from this extract or what is contradictory or unclear from the evidence provided. After having planned an answer, if you would like to have a go at writing an essay to answer the question, write for no more than c.40 minutes.

To find out more about this primary source, click here to learn more about the teaching and research of Siân Pooley, a tutor in Oxford’s History Faculty:

My research seeks to understand children’s lives in late-nineteenth- and early-twentieth-century Britain. Most historians have studied childhood through the writing of adults. This is principally because the vast majority of evidence about childhood in the past is created by adults, either because they sought to prescribe what children ought to be like or because adults recalled what they remembered from when they were young fifty or sixty years earlier. But, these adult-authored sources offer us very partial and potentially inaccurate insights into what it meant to be a child. To try to learn more about what people really did, felt, and thought when they were still young, I started working on a research project using participatory children’s columns that were maintained in some weekly local newspapers, including the Manchester Weekly Times, between the 1870s and the 1930s.

The columns were partly the result of a revolution in working-class education across the nineteenth century. From 1870, schooling was made available to children across England. From 1880 attending school was made compulsory between the ages of 5 and 10, and in 1891 elementary education was made free. These legislative changes had a particular impact on the ability of poorer children and girls to access education, and, as a result, by 1900 almost all children were able to read and write. In the same way that young people today are often better at using computers and spend more time online than their parents or grandparents, these late nineteenth working-class children were more able to read and write than older generations. They were excited by these new literacy skills and journalists like ‘Uncle Oldman’ sought to attract this new group of young readers, writers and artists, who might persuade their parents to pay a penny for the newspaper every week. As a result of this transformation in the power and visibility of children, these decades are the earliest period in British history when we can learn what large numbers of ordinary children thought about their lives. You can listen to me talking more about these transformations here.

When I started working with these letters, poems, stories and pictures created by these literate child consumers, the ideas they expressed raised an important wider historical issue for me. When we think about how social change happens, we often assume that the whole population changed at the same time. These columns, however, show how powerful generational change can be in explaining how changes happens. The younger generation, born from the 1870s onwards, benefited from more education, had contrasting experiences, and expressed different values to their parents. I argue that many of the central changes in early twentieth century society were the result of this generational transformation in working-class childhoods. When they became adults in the early twentieth century, many argued for a more democratic political system, for the need for more social welfare and education, and for their rights to more money, space and time for leisure. Ernest, Ethel, Margaret, and Alfred were part of this generational change. The aspirations and expectations they expressed in adulthood were partly the result of their distinctive experiences in childhood.

At Oxford the research we do is closely linked to the courses we teach to undergraduates who study in the History Faculty. Two colleagues also work on later nineteenth century childhood, Christina de Bellaigue and Kathryn Gleadle,  so we created a new course that explores these questions, called Becoming a Citizen, c.1860-1902. It is a Special Subject and the third-year students research an extended coursework essay and take an exam in which they make sense of these primary sources. These children’s letters are included in the set texts, so the final-year undergraduates may be asked questions on the same passages that you have been reading! Oxford’s History Faculty is also home to the UK’s only Centre for the History of Childhood. We organise seminars and events, so that undergraduate and especially graduate students, as well as Faculty members, can work together in thinking about children’s lives in the past and how we can best find out about them!

To find out more about children’s lives in the past, here are some ideas for places you could explore:

There are museums across the UK that offer insights into the history of childhood. You could visit the V&A Museum of Childhood in London, the National Trust’s Museum of Childhood at Sudbury Hall in Derbyshire, or the Museum of Childhood in Edinburgh. One of my particular favourites, which gives a unique insight into the lives of some of London’s most disadvantaged children, is the Foundling Museum. Or, if you are walking around your home town, think about what marks past children have made upon the landscape, the buildings or the objects that surround you. How far is our evidence for the past created by adults?