Exercise Two - Indigenous Javanese Religion of the Republic of Indonesia 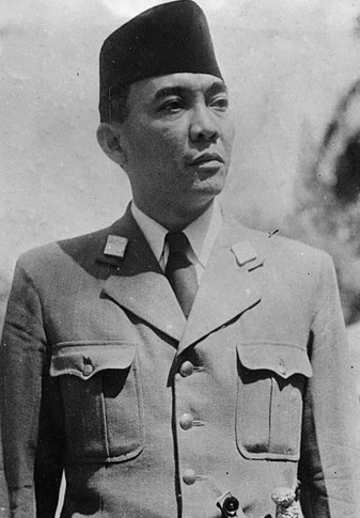 The following letter was written in 1958 by the ‘Indigenous Javanese Religion of the Republic of Indonesia’ community. It was sent to President Soekarno, who the community believed to be their prophet. In 1945 Indonesia had proclaimed its independence, following colonisation as part of the Dutch empire and Japanese Occupation during the Second World War. The letter was written in Indonesian, but some of the phrases were repeated in Javanese – these phrases have been left untranslated. The letter is held by the National Archives of the Republic of Indonesia (Collection RA14 – Konstituante, file #307).

The text has been translated from the Indonesian original by Kevin W. Fogg.

To His Excellency, the President of the Republic of Indonesia

With regard to the letter from the Director of the Presidential Cabinet no. 1134/Um/58 signed by the Presidential Secretary Mr. Santosa and dated 14 April 1958 stating that H.E. the President does not want to be seen as a Prophet by the Indigenous Javanese Religion of the Republic of Indonesia (A.J.A.R.I.), we write this letter to lay out in brief an explanation that A.J.A.R.I. believes that Brother ’Karno is indeed our Prophet, as follows:

A.J.A.R.I. believes that Brother ’Karno is our Prophet because on the 17th of August, 1945, or 8th of Poso, a Friday and Legi day in the Javanese calendar year 1876, Brother ’Karno announced (proclaimed) to all the People of Indonesia that they should unite in throwing out the colonizers, such that the People of Indonesia collectively—with all social classes and groups obeying fully—were able to unite and throw out the colonizers. So, in the view of A.J.A.R.I., at that moment Brother ’Karno’s true spirit (the essence of Brother ’Karno) was possessed by the One True God (Hyang Wasesaning Tunggal) which actually made the proclamation, meaning that at that moment the One True God (Hyang Wasesaning Tunggal) entered or became one with the body of Brother ’Karno to proclaim the Independence of Our Country through the medium of Brother ’Karno. This is similar to how the sun acts through its rays of light or the sea acts through its waves. …

So beginning on the 13th of November 1950 the whole community of A.J.A.R.I. has believed that Brother ’Karno, who created the national philosophy of Pancasila, is the Prophet of A.J.A.R.I., because the meaning of ‘Prophet’ is the Highest Leader whose vision can create the foundation of a Country, such that what he created has been recognized by the whole People on the 17th of August 1945 or 8th of Poso 1876 in the Javanese calendar. And A.J.A.R.I. is always loyal to the Constitution of 1950,

Article 18: Every person has a right to freedom of religion, belief, and thought.

Article 19: Every person has a right to the freedom to hold and express ideas.

1. The State is founded on belief in the One True God.

4. The authorities will oversee that all religious groups or associations are faithful to the laws, including written regulations.

With this, we surrender an attachment that gives a bit of the background of the emergence of the Indigenous Javanese Religion of the Republic of Indonesia (A.J.A.R.I.). Thus is our position, and if there is anything inappropriate we ask forgiveness a thousand times.

After you have read through the extract, click below to find some questions to start analysing what we can learn from this text:

Using only the information provided in the extract above, try to answer the following questions:

1. What can we learn about the religious faith of the ‘Indigenous Javanese Religion of the Republic of Indonesia’ community? Is there anything interesting about their name?

2. What does the text suggest about political power in Indonesia? What was the attitude of the ‘Indigenous Javanese Religion of the Republic of Indonesia’ to the government?

3. Does the language used in the letter offer any clues as to the aims of the author?

4.  What can we learn from the letter about understandings of time and history?

5. In the second paragraph, what is the relationship between religious and nationalist ideas?

When you have had a go at finding precise evidence to answer these questions, click here to move on to the next stage of interpreting the source:

You are now ready to draw together all of these ideas to answer this final, larger question:

What does this document tell us about power in Indonesia?

Think about how to order your ideas to answer the question most clearly and directly. Always provide evidence from the extract to support each point you make. Think also about what we cannot learn from this extract or what is contradictory or unclear from the evidence provided. After having planned an answer, if you would like to have a go at writing an essay to answer the question, write for no more than c.45 minutes.

To find out more about these primary sources, click here to learn about the research of Kevin W. Fogg, Research Associate in Oxford's History Faculty.

When I came across this document in the Indonesian National Archives, I was immediately struck. This is a very unusual document for its merger of modern, international, bureaucratic language (such as the letter number and the quoted articles from the constitution) and traditional spiritualism (influenced by Islam—the majority religion of Indonesia—and Sufi mysticism but also by local Javanese practices that predate Islam). I was fascinated by the very idea that Soekarno, the president of the world’s fifth largest country at the time and a major player in the Cold War, could be seen as a prophet and the independence of Indonesia could be seen as a divine revelation!

This document is also unusual for coming from the kind of minority that rarely appears in the archives. We are lucky that this letter survived, although many of the other associated documents (such as the referenced letter to this group in which Soekarno turns down prophetic status) seem not to have been preserved. This new religious community was probably just a few hundred people, almost assuredly at the lower end of the economic spectrum, based outside of a medium-sized town in Central Java. Although their access to someone who could type up this letter means they were not the most marginalized or disempowered group in Indonesian society at the time, it is clear to me that they were still on the fringes. It is very rare to hear from these kinds of historical actors in archival collections, which is why I am often out in the field collecting oral histories in rural Indonesian communities, in search of such peripheral perspectives.

My forthcoming book is about the Indonesian Revolution for independence from Dutch colonialism, which was fought from 1945 (starting with the proclamation of independence on 17 August, as in the letter) through 1949. I write about the Islamic understanding of this war on the Indonesian side, but there were many different interpretations among fighters on the ground, including communists, religious nationalists, military commanders, loyalists to the Dutch, and others. Although I am accustomed to reading and hearing about alternative perceptions of the revolution that have now been side-lined in the authorized nationalist narrative taught in Indonesian schools, the particular understanding in this document was completely unexpected.

This document, and the way that the Indonesian government shortly after independence dealt with small, minority religious communities, has also prompted me to think about the role of government categorization of religion. This is the most crucial element in modern religious regulation. This topic is the focus of a collaboration with colleagues across several different disciplines to think comparatively about categorization and religiously-framed state-making.

In the Oxford curriculum, there are several opportunities to learn about Indonesia or to study how religion and nationalism changed in the twentieth century. ‘The Global Twentieth Century, 1930-2003’ allows second-year students to examine topics like decolonization, religion and politics, and the Cold War from a global perspective. Tutors and lecturers draw examples from around the world to prompt big-picture, comparative approaches to the modern era. Many of the themes of this primary source, including revolution, conversion, and state-building, are also frequent topics in the summative methodology paper students study in their second and third year, called Disciplines of History.

To find out more about Indonesia’s political climate after independence, here are some ideas for places you could explore:

If you want to explore a different approach to Indonesia’s political climate after independence, you can read through the profiles of over 600 members of its Constitutional Assembly. This project run by the Oxford Centre for Islamic Studies in collaboration with the University of Indonesia brings together a lot of individual profiles to think about the collective characteristics of a group (in this case, Indonesia’s political elite), a historical method called prosopography.

To think about Indonesia (and the neighbouring modern-day countries of Singapore and Malaysia) in an earlier period, the British Library has digitized its fantastic collection of the papers of Sir Thomas Stamford Raffles. He was the governor of Java from 1811-1816, then went on to found the modern city of Singapore, and his interests ranged from natural sciences to culture to politics.

To find out more about new research by scholars of Indonesian history, you might want to look at the journal Indonesia. Some translated primary sources published in that journal might be of particular interest, such as an intelligence report about the mass killings in 1965 or a Japanese army account of peasant unrest in 1942.