The female body through the ages - do necks have a history?

The female body through the ages - do necks have a history? 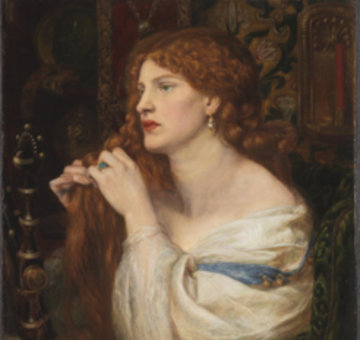 My project aims to examine the relationship between ideals of the female neck and shoulders within visual and literary culture, for example in images, films and novels and women’s actual experiences of their bodies as captured in diaries, letters and interviews. I’m currently analysing collections of paintings and photographs of women held by the National Portrait Gallery and the Royal Collection Trust. I want to see how women’s decisions about exposing or concealing their necks and shoulders changed over time, and the significance (if any) that age, class and marital status had in these decisions to expose or conceal the neck and shoulders.

The idea behind this project came about because when working on other topics I noticed something quite visually striking and strange, which I couldn’t find an explanation for. Simply, that elite women were exposing a huge amount of their upper torso and this was not considered immodest or inappropriate. Once I started paying attention to women’s exposed necks and shoulders, I started seeing them everywhere.  It seemed to me that this repeated image of a long pale neck and sloping shoulders represented a striking continuity in a period that is normally seen as one of dramatic change in women’s roles and fashions – for example women getting the vote in 1918, or the so-called ‘flappers’ of the 1920s.

Like everything, the body has a history. We can trace changes and continuities in the way people have thought about, experienced and represented the body. This is really important because if we are thinking about the significance of gender in history, we know that gender is performed with, and experienced through, our bodies. Focusing on the neck and shoulders provides a new ‘way in’ to thinking about ideals of femininity across this period.

I’m looking at the period from the coronation of Queen Victoria in 1838 to the coronation of Queen Elizabeth II in 1953. So my project spans the periods you might know as ‘Victorian’, ‘Edwardian’, ‘First World War’, ‘Interwar’ and ‘Second World War’. Essentially, all historians have to make choices about when to start and end the bit of history that they want to study. This means dividing up the past into neat chunks. But often, these periods have been dictated by what historians have seen to be the most important ‘turning points’ or moments of change – which in practice often means the actions and experiences of white men. So what we choose to study is a political choice – who we include and leave out of our narratives, and when we start and stop the story. I’m interested in what happens to these ‘periodisations’ when we put the actions and experiences of women at the centre of our narrative.

Because my project goes across the 19th and 20th centuries, which are two traditional periods often written about separately, it responds to an argument by some historians that we should think about a ‘long nineteenth century’. What this argument is getting at is the apparent persistence of ‘Victorian’ social and cultural trends well into the 20th century, up to about the 1960s when things began to change a lot. So if I do find evidence of continuity in terms of the experience and representation of the female neck and shoulders, that will be a significant new contribution to the bigger argument about a ‘long nineteenth century’.