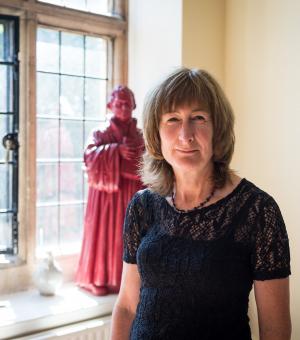 I did my undergraduate degree in History with Philosophy at the University of Melbourne, and from there I went to study in Germany at the University of Tübingen before moving to the University of London (King's College) where I completed my doctorate. I worked at Royal Holloway, University of London and then moved to Balliol College, Oxford, where I was Fellow and Tutor in History. I'm now at Oriel College. I am the first woman to hold the Regius Chair in History, and the first Australian. I've worked on the history of witchcraft and have recently published a biography of the German reformer Martin Luther. I am now writing a history of the German Peasants’ War (1524-5), the greatest uprising in western Europe before the French Revolution. I am happy to supervise graduate students in the area of early modern German history, the history of witchcraft, gender history, history of the body, sexuality, or indeed any topic within the cultural and religious history of the early modern period.

My first book, The Holy Household (1989), examined how the Reformation transformed gender relations in one town, Augsburg. My next book, Oedipus and the Devil (1994), (Ödipus und der Teufel, Campus, 1995) explored several themes in early modern German culture, including sexuality, discipline, and masculinity. In Witch Craze (2004), (Hexenwahn, Beck, 2005) I examined trials of women accused of witchcraft. The book argued that the witch craze sprang from a collective fantasy. Older, infertile women were accused of harming infants and destroying fertility in the natural and human world. The Witch in the Western Imagination (Virginia UP 2012) discusses images of witches: beautiful, disturbing, and hard to relate to the trials. My latest book is a biography of Martin Luther - Martin Luther: Renegade and Prophet. I am currently  finishing Luther’s World, Body and Soul (Princeton 2018) on social and cultural themes connected with Luther.

Together with Mette Ahleveldt-Laurvig I convene a Workshop where many postgraduates working on early modern topics loosely related to German history meet to discuss our work.  Current members include;- Martin Christ, who is writing his doctorate on Upper Lusatia and the Reformation,  Mette Ahlefeldt-Laurvig writing her doctorate on Childbirth Rituals in early modern Denmark, Edmund Wareham, who has finished a doctorate on the nuns of the convent of Günterstal, Natalie Cobo who works on Spanish chronicles of the New World, Ryan Asquez working on images of the Suffering Christ between 1450 and 1550, Laura Roberts, who works on English women’s religious networks in the sixteenth century, Ryan Crimmins, religion and soldiers in the Thirty Years’ War, Cecilia Tarruell, Newton International Fellow, who is working on migration in the Hispanic World and Ottoman Empire. Ongoing and past members include Hannah Murphy, now at KCL, who works on medicine in sixteenth century Nuremberg, Clare Copeland  whose most recent book is on the Florentine saint Maria Maddalena de’ Pazzi, Chris Kissane (Institute of Historical Research London) who is finishing a book on Food and its meaning, including a study of sausages in Zurich, Carla Roth, Historisches Seminar Basel, who is  writing a book on Johannes Rütiner, John Jordan, University of Bern,  writing on legal cultures in early modern Freiberg, and Adrianna Catena, University of Warwick, who is finishing a book on indigo.

Living I Was Your Plague: Martin Luther's World and Legacy (PUP, 2021)

Living I Was Your Plague: Martin Luther's World and Legacy (PUP, 2021)

Martin Luther was a controversial figure during his lifetime, eliciting strong emotions in friends and enemies alike, and his outsized persona has left an indelible mark on the world today. Living I Was Your Plague explores how Luther carefully crafted his own image and how he has been portrayed in his own times and ours, painting a unique portrait of the man who set in motion a revolution that sundered Western Christendom.

The first historical biography in English, for many decades, of Martin Luther (1483–1546), whose rebellion against the authority of the Church helped to create the modern world.

Luther’s ideas spread like wildfire. His attack on the Church soon convulsed Germany, divided Europe and polarised people’s beliefs. They triggered decades of religious persecution, social unrest and war. And in the long run, his ideas paradoxically helped break the grip of religion in every sphere of life.

Winner of the Gerde-Henkel Prize 2016

Winner of the Gerde-Henkel Prize 2016

Interviewed about the Gerda-Henkel Prize

Interviewed about the Gerda-Henkel Prize

I would like to hear from potential DPhil students regarding early modern European history.