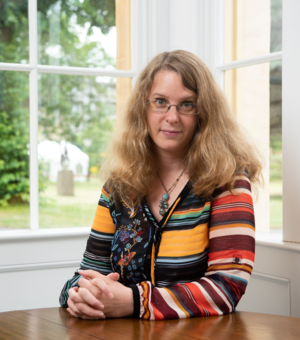 I am a historian of the late medieval and early modern worlds, with a particular interest in exploring Central Europe in its wider European and Eurasian context. From 2013-18, I was Principal Investigator of a €1.4m European Research Council (ERC) project entitled ‘The Jagiellonians: Dynasty, Memory and Identity in Central Europe’. I am currently writing a new history of the Jagiellonians, which applies a global history lens to this leading but ill-understood dynasty of Renaissance Europe (1386-1596).

My most recent book, ‘King Sigismund of Poland & Martin Luther’ (OUP, 2018), offers a new history of the early Reformation in Poland. It was awarded the George Blazyca Prize and Gerald Strauss Prize, and named co-winner of the Kulczycki Prize and the BASEES Women’s Forum Prize. I have current research interests in dynasty, long-term cultural memory, and the application of global history approaches to Central Europe.

My research seeks to find new perspectives on the history (and concept) of Europe. To do so, my work explores two key fault-lines in European history: between medieval and modern, and between ‘East’ and ‘West’. Much of my research has been focused on Poland and its neighbours in the 14th-16th centuries, as peoples and places who sat squarely across both those fault-lines at once.

One strand of my research has looked afresh at the last years of the late medieval church in Central Europe, and the emergence of radically new world-views with the Reformation. These problems were explored in my book Church, State and Dynasty in Renaissance Poland: the Career of Cardinal Fryderyk Jagiellon (winner of the Polish Studies Association first book prize), and in articles on crusading and early printing (Past and Present, Historical Research). In 2012-13, I held a British Academy Mid-Career Fellowship, during which I completed a new history of the early Reformation in Poland. This book seeks to shake up traditional ideas about the geographies and trajectory of Lutheranism, and also offer an alternative interpretation of the Reformation itself as a concept. King Sigismund of Poland and Martin Luther: the Reformation Before Confessionalization (OUP, 2018) was awarded the George Blazyca Prize and Gerald Strauss Prize, named co-winner of the Kulczycki Prize and the BASEES Women’s Forum Prize, and received Honourable Mention for the Zelnik Prize.

Another strand of my research has been the Jagiellonians, the originally Lithuanian royal house who ruled half of Christian Europe by 1500. From 2013-18, I was Principal Investigator of a €1.4m European Research Council (ERC) project entitled ‘The Jagiellonians: Dynasty, Memory and Identity in Central Europe’. With a team of 5 post-doctoral researchers, the project studied this vast dynasty in a newly panoramic way. The project’s first book, Remembering the Jagiellonians (Routledge, 2019) reconstructs how memories of the dynasty have shaped the politics, culture and identities of Central Europe, from the 16th century to the internet age. The project’s second book, meanwhile, will interrogate the concept of dynasty in the Renaissance, and trace the gradual construction of a ‘Jagiellonian’ identity by humanists, princes, poets and subjects from the 14th to the 17th centuries. Following on from this project, I am currently writing a new history of the Jagiellonians, which applies a global history lens to this polytheistic tribe who become a leading dynasty of the European Renaissance (1386-1596).

King Sigismund of Poland and Martin Luther: the Reformation Before Confessionalization (OUP, 2018)

King Sigismund of Poland and Martin Luther: the Reformation Before Confessionalization (OUP, 2018)

he first major study of the early Reformation and the Polish monarchy for over a century, this volume asks why Crown and church in the reign of King Sigismund I (1506-1548) did not persecute Lutherans. It offers a new narrative of Luther's dramatic impact on this monarchy - which saw violent urban Reformations and the creation of Christendom's first Lutheran principality by 1525 - placing these events in their comparative European context.

A collection of 9 essays, examining for the first time the comparative, long-term cultural memory of the Jagiellonian dynasty (1386-1572) in Lithuania, Poland, Hungary, Czech lands, Germany/Austria, Scandinavia, Russia, Belarus and Ukraine, from the 15th-century to the present day. This book seeks to promote dialogue between historians of pre-modern Europe, historians of modern Europe, and theorists of cultural memory in literature and social science. It is published as part of Routledge's new book series 'Remembering the Medieval and Early Modern Worlds'.

Natalia writes a blog, Somerville Historian, about teaching and writing history at Oxford

In 2012-13, she also kept a blog-diary about the experience of drafting a historical monograph