My research and publications centre on the history of numeracy and mathematics, and the ways mathematics influences and is a part of cultures. I have worked mainly on topics in early modern Britain, including mathematical music theory in that period, a biographical study of the mathematician, natural philosopher and educator Charles Hutton (1737–1823), and the reception of the Euclidean Elements of Geometry in sixteenth- and seventeenth-century Britain. I also have a special interest in practices of mathematical reading and the evidence for them including annotations and marginalia.

I have published a number of more wide-ranging books, including a textbook for students interested in reading historical mathematics and an anthology of five centuries of popular mathematical writing.

I have taught in both the Mathematical Institute and the History Faculty, and am always happy to hear from graduate students hoping to work in my areas of interest.

For my doctoral project (Oxford, 2006) I looked at mathematical theories of music in early modern Britain: theories of pitch and tuning and their relationship to natural philosophical ideas about sound and hearing in the same period. Since completing that project I have published several critical editions of sources in the same field, including writings by René Descartes and Isaac Newton that bear on the nature of sound and its mathematical description. I maintain an interest in this area, and have participated in research projects and given papers on various topics in the early modern study of sound and music.

My post-doctoral work, done at All Souls College, Oxford, focussed on popular and everyday mathematics in Georgian Britain. I explored sources including almanacs, textbooks, school curricula and newsprint for evidence of how mathematical skills were acquired and disseminated, and how mathematics was used and viewed by people whose main fields of interest and expertise lay elsewhere. This research led to a number of publications including my book Poor Robin’s Prophecies (OUP, 2012). The long-term processes of change in this area – how populations acquire or lose numerate skills – remains one of my main interests, and has motivated my subsequent work. Smaller ‘spin-off’ projects have included a study of the mathematics of the natural historian and ‘virtuoso’ Francis Willoughby and an ongoing investigation of marginalia and annotations in early modern mathematical books.

More recently I have received AHRC funding for two separate projects. First, a biographical study of the mathematician and educator Charles Hutton (1737–1823). A celebrity in his day, Hutton is now mainly remembered as the enemy of Sir Joseph Banks, whose dismissal from a secretarial role at the Royal Society provoked a row that nearly unseated Banks as President of the Society. But he was also a mathematical editor, compiler, author and patron of exceptional range, as well as a talented experimental natural philosopher and – for perhaps thirty years – the leading voice speaking for mathematics in English. My biography of Hutton was published in 2019.

Second, I was the Principal Investigator on the AHRC-funded project ‘Reading Euclid in Early Modern Britain’. Together with Philip Beeley and Yelda Nasifoglu I  investigated the dissemination of the Euclidean Elements of geometry in Britain from the early sixteenth to the late seventeenth century. The Elements was a culturally pervasive text, studied at grammar schools and universities, drawn on by practical manuals and alluded to by literary authors. Ours was the first study to consider in detail the history of its early modern publication, dissemination and use, using both printed and manuscript evidence from around Britain. Our catalogue of printed edition of the Elements, and our collection of essays on the subject, will appear during 2020, as will my general-audience account of the longer history of Euclidean reception. 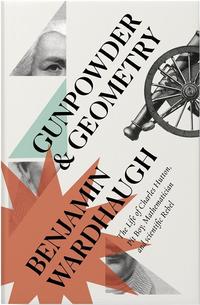 This is the story of a miner’s lad from Newcastle, who left the coal pits to become a teacher, a professor, and a scientist of international fame.

In 1756 Charles Hutton, aged 18, dropped out of his career as a coal hewer on north Tyneside. He’d hurt his right arm in an accident years before, and it wasn’t strong enough for the coalface. He was a clever boy, and coincidence gave him the opportunity to take up teaching instead, in a local school.

It was a momentous decision, and it took him on a journey he could never have imagined. By the end of his life the miner’s lad was Professor of Mathematics at the Royal Military Academy and a fellow of learned societies in four countries. Admired, loved, even revered by three generations of students, he’d successfully defied the Royal Society of London and become the leader and spokesman for British mathematicians. His books were read from Pennsylvania to Calcutta, and if a British cannon was pointed at you in America, France, Spain or India it was probably being pointed by one of Hutton’s students. When he died, the Duke of Wellington and the Lord Chancellor of England led the tributes, saying that England would be forever in his debt.

Gunpowder and Geometry tells the story of this remarkable man, who overcame injury, family tragedy and the prejudice of the London scientific establishment to become the foremost British mathematician of his age. It traces his career and his colourful family and personal life from the Newcastle coalfields to the corridors of the Royal Military Academy, the Royal Society of London and the court of St James.

I would like to hear from potential DPhil students regarding any area in the history of mathematics or early modern history of science.