For the remains of medieval British libraries, the scholar must deal in fragments. Libraries are attested first by their surviving books and second by surviving medieval catalogues of the collections. This project’s aim is to bring together these complementary fragments in a resource that will enable an integrative reading of the evidence. 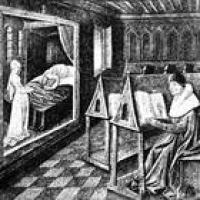 The Corpus of British Medieval Library Catalogues, a major project to publish the medieval catalogues of British libraries, is now within sight of completion. As a complement to this, it is necessary also to update the standard research tool that records extant manuscripts according to evidence of their medieval library provenance, Neil Ker’s Medieval Libraries of Great Britain (1941) (MLGB); revised and augmented in 1964 (MLGB2). The opportunity exists to integrate these two strands in a single innovative digital resource. Completion of both strands will take several years, but thanks to generous funding from the Andrew W. Mellon Foundation, Professor Richard Sharpe, Dr James Willoughby and a team from Library Services are working on a pilot project on creating an electronic edition of the Medieval Libraries of Great Britain.

It is clear that a new edition of MLGB must take advantage of the possibilities offered by digital technology and the internet, and there are many ways in which this will also make possible genuine improvements in the content that can be linked together in an electronic MLGB3. We also see an opportunity to bring to MLGB3 a new avenue of entry, allowing the surviving books there listed by provenance to be searched by author and title through the same search-route as serves the Corpus, the cumulative index-list of identifications. We envisage that in the future this will further serve as a model for parallel searches by author and title in the 28,000 printed editions produced before 1501 and known as incunabula.