Libraries have been fundamental to all humanistic inquiry since antiquity. Catalogues compiled in the middle ages provide the means to understand what books were available and how they were organized and used, even though the libraries themselves were dispersed centuries ago and most of the actual books lost.

Some itemize all texts in each volume and so provide a full picture of the contents of a library at a particular time, others inventorize books as objects and refer only to the principal text contained; for some libraries there survives a whole series of catalogues, allowing one to trace the development of the collection, while others were dynamic documents, added to and altered by successive librarians over a long period. Such documents can be very difficult to understand, demanding a great deal of knowledge (both of texts and manuscripts) to make sense of them. When their medieval references to individual texts are understood, however, they provide an essential perspective on medieval intellectual life. They show what texts might be available at a particular period in a certain sort of institution, revealing what a scholar there might have had access to, and they allow us also to see how knowledge was organized. They underpin our knowledge of monastic learning and of university curricula. It is possible to trace surviving books that bear evidence of their medieval library-provenance; in rare cases we find enough survivors with shelf-marks to begin to reconstruct the organization of the library. Medieval catalogues make this possible for many more libraries than do surviving books, and, almost more importantly, for libraries of different kinds. One can form a picture of a typical library of a certain kind in a certain period, and one can see the particular contents of some unusually good libraries. Every effort is made to trace where the medieval manuscript survives, since comparison with the book itself enhances one’s reading of the medieval catalogue. 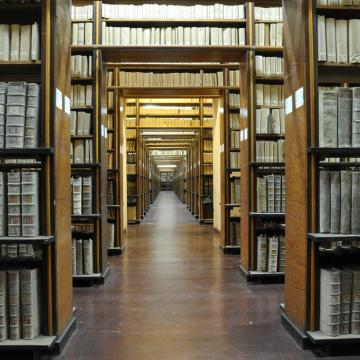 The project deals with fundamental evidence for the transmission of culture. Our work provides a guide to British library records from the earliest, a short list from the tenth century, down to the mid sixteenth century. Our definition of ‘medieval’ is therefore wide enough to include many works of Renaissance humanism, and through the whole period libraries had very many copies of Classical and Patristic texts. The learning documented extends over a very long period and many subject areas, with the consequence that many users will require bibliographical orientation as well as help in interpreting the medieval titles and attributions. Our project has taken both the examination and the explication of medieval booklists to a new level, deliberately annotating in such a way as to enable users to learn how to make sense of these documents. It is possible from our volumes to train oneself in the use of a large class of source material, but our indexes and notes are equally accessible for the user who wants to find out about lost copies of a particular text or about the resources known to have been available in a particular medieval institution or group of institutions.

The four files available below provide, chiefly, a searchable PDF of the List of Identifications, which is a cumulative index to identified works appearing in the first sixteen volumes of the Corpus. This is some 900 pages in length (5MB). The List comprises records for more than 9000 works documented from British libraries between the late 10th and mid 16th century; of these about 670 are identified anonymous works and 8500 are the works of 3300 different writers ranging in date from Homer and other Greek authors to the middle of the 16th century. It is estimated that over 40,000 copies of individual works are recorded so far, of which some 85% do not now physically survive. The great majority of the individual copies so documented were manuscripts, but the List also records nearly 6000 copies of printed editions recorded in lists dating from between the invention of printing and about 1550.

There are still some dozens of queries within the List, which continues to be augmented and improved. Corrections are received with gratitude. Also available here is an Introduction to the List of Identifications, explaining its principles and complexities; a key to references by which medieval and early renaissance booklists are cited; and a list of the published and unpublished volumes of the Corpus.

All of the files may be downloaded as PDFs for printing or displayed on screen (and searched) using the Adobe Acrobat Reader. The reader is freely available and can be obtained directly from Adobe. For best performance save the files to your computer (ctrl + click).

For regular use of the List of Identifications, readers are recommended to print copies of the introduction and keys to abbreviations and to medieval documents, so that they can become familar with the methods of the list.