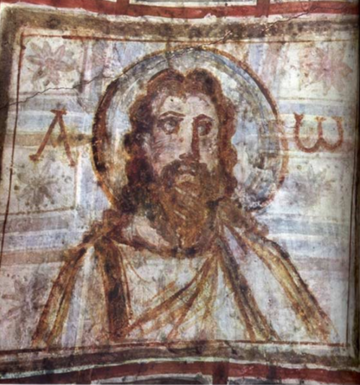 A late 4th century painting of Jesus from the catacombs of Commodilla, Rome. This is one of the earliest depictions of Jesus with a beard.

Defining a period of time is a difficult task. For historians, this usually means setting yourself up for an argument; you must consider multiple factors, from varying perspectives, with the expectation that someone will think you are very wrong indeed. You will need to consider the following: when did this time period begin and end, and does it overlap with others? What are the period’s most important features? Are there geographical boundaries in play? Luckily, nothing prevents us from asking these questions again and again. We’re free to change our minds, take new stances, realign our priorities, or even throw out this system of forced periodisation entirely. But, until the next seismic terminological shift occurs, I broadly define late antiquity as follows: it is the stretch of time from around 200 to 800 CE, sandwiched between (and overlapping with) classical antiquity and the medieval period. It hosts some heavy-hitting historical events, including the origins and spread of Islam and the fall of the western Roman Empire. Historians (most notably Peter Brown) have sought to identify the character of the period's religious and cultural movements, the priorities of its inhabitants, and its political struggles.

Late antiquity is characterised by upheaval of almost every variety, but it is religious instability and its intersection with contemporary understandings of gender that particularly interests me. When whole systems of religious belief were overhauled in favour of new ones – for example, the Roman Empire’s conversion from paganism to Christianity – surprising people suddenly became figures of immense authority. Take, for example, the aristocratic widow Marcella, who lived in Rome in the later fourth and early fifth century. She was an intensely pious Christian, and is described as modest, fiercely intelligent, and averse to luxury despite her extremely wealthy family. She was part of a community of similarly-minded religious women. During a conflict known as the Origenist Controversy, Marcella intervened when two Christian sects disagreed on some finer points of doctrine and in a series of letters she managed to talk one group into halting their harassment of the other. According to Jerome, the biblical scholar from whom we get most of the information about Marcella’s life, her actions were nothing less than a blessed victory for Christian truth.

Why was Marcella a surprising person to hold this kind of authority? In part, this is due to a prohibition of female teachers in the Bible which certainly influenced contemporary views on gender norms: 1 Timothy 2:12 states that ‘I do not permit a woman to teach or to assume authority over a man; she must be quiet.’ And whilst women were among the first apostles and had considerable influence in early Christian communities, for example the deaconess Phoebe who is mentioned in Romans 16:1-2, there is little evidence to suggest that female ordination or leadership was a widespread and continuous practice in late antiquity. But, as we know, Marcella was enormously wealthy and a member of the Roman aristocracy. We must not discount the role that Marcella’s wealth and status played in securing her influence, but we should consider how these factors interacted with her position as a well-connected Christian.

When Marcella took her stand during the Origenist Controversy, the Roman Empire was beginning to crumble; she would eventually die from wounds sustained during the Sack of Rome in 410. By this point in history, Christians – previously a strange Messianic sect who insisted on being dramatically martyred – had come to occupy important Roman political and administrative positions that demanded respect. To reframe this enquiry slightly: if Marcella had written her theological letters in a different time period, would she have been listened to at all? Or did her favourable reception – as a Christian, and as an elite Roman woman – depend upon this late antique rejigging of religion and culture?

The contributions, activities, thoughts, and writings of women are vastly underrepresented in the surviving documents from late antiquity. Most of what we do have comes from elite women, but status does not ensure preservation: Marcella’s letters, although they are referenced by Jerome in his letters, have been lost. Although late antiquity certainly presented an opportunity for some women to occupy positions of authority, this is not always straightforwardly represented in the extant texts. Finding out more about such women often comes down to detective work, piecing together snippets and asides in an overwhelmingly male-authored body of writing, and taking the occasional well-judged leap. This is slow, frustrating, and complicated – and always worth doing.