Summer Vacation in the Archives

Given the wealth of digitised and published material available nowadays, using archives is by no means necessary for the thesis. However, I felt hugely privileged to be able to handle little-viewed sources. 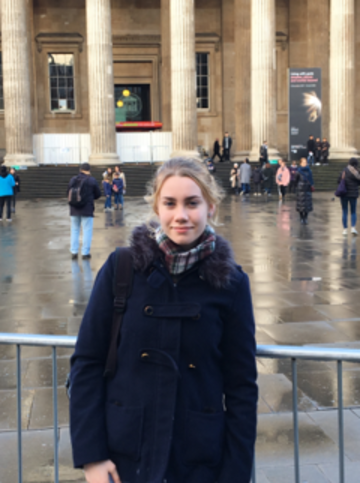 Lara Garrett is from Marple, Greater Manchester, where she attended a state comprehensive before reading History at Mansfield College. On graduating in 2020, Lara received the Arnold Modern Historical Prize for the best thesis on modern history (i.e. post-285 AD). Her thesis was supervised by Professor Kathryn Gleadle and explored schoolgirl magazine cultures at the fin-de-siècle.

On first coming to Oxford, I was amazed by the diversity of options offered. I had long been interested in gender history, however had little opportunity to study this at school. At Oxford I took every opportunity to study gender, and when the time came to choose a thesis topic, I knew I wanted to research gender in modern Britain. Yet I had no clue how to begin narrowing this down.

Settling on a thesis idea was a painstaking process – though this need not be the case. I convinced myself that I needed to find the ‘perfect’ topic, which led to a succession of disparate ideas ranging from Jane Austen’s juvenilia to Victorian body image to interwar school uniform. My supervisor, Professor Kathryn Gleadle, provided the much-needed reminder that the ‘perfect’ topic does not exist, and proposed that I instead identify a body of sources and allow an idea to emerge from this. She mentioned a number of archives near my home in Greater Manchester, one of which was at Manchester High School for Girls (MHSG). After meeting Dr Catherine Sloan, whose doctorate examined Victorian school magazines, and on enjoying preliminary reading into nineteenth-century girls’ periodicals and education, I contacted the MHSG archivists to request access to the school magazine. With travel costs funded by my college, I spent two weeks at the archives over the summer.

Given the wealth of digitised and published material available nowadays, using archives is by no means necessary for the thesis. However, I felt hugely privileged to be able to handle little-viewed sources. Sampling the school magazine between 1883 (from which point an almost-complete run of magazines survives) and 1914, I was fascinated by the themes which emerged. Particularly intriguing was the close involvement of past students (‘old girls’) in both the school and its magazine. Old girls organised countless activities, including book clubs, bicycle meets and fancy dress parties, and the magazine catered for them as much as – if not more than - current students.

As well as the school magazine, I was fascinated by a manuscript magazine called the ‘Boarding House Chronicle’, produced by two girls living at the school boarding house. Removed from staff mediation, it offered a different perspective on schoolgirl magazine culture. It illustrated how authorship - particularly editorship - bestowed status and shaped power dynamics within the boarding house. The multiple magazine cultures in which schoolgirls participated highlighted the significance of the genre, helping provide reassurance that I had enough material for a viable thesis.

After archival research I immersed myself in secondary literature, considering its implications in light of my primary sources. I identified three key historiographies on nineteenth-century girls: the expansion of girls’ education, the emergence of print forms targeting girls, and the crystallisation of ‘girlhood’ as a cultural category (whereby girls were seen as a distinct group). Common to all three historiographies was the priority assigned to adult actions and the inattention to girls’ agency. My research allowed me to challenge this assumption through revealing girls contributed significantly to print forms, rather than simply internalising adult-authored content. Through their magazines, girls constructed girlhood cultures which sometimes aligned with – but more often deviated from – notions of girlhood imagined by adults. Moreover, school magazines enabled girls to contribute to educational change.

I was surprised to find that historians had overlooked alumnae, given the important role played by old girls at MHSG and its magazine. I found nostalgia for schooldays a fascinating phenomenon as it encouraged reflection on the boundaries between ‘girl’ and ‘woman’. This allowed me to raise issues with categories used by childhood scholars, thus to draw out the wider significance of my research – the critical part of a thesis. Nostalgia for school formed the last chapter of my thesis as well as the final part of its title: ‘Girlhood, Identity and Nostalgia in The Manchester High School Magazine, 1883-1914’.

In terms of advice I would give to students, really take advantage of all the fantastic opportunities at Oxford to engage with cutting-edge research beyond your immediate degree. Whatever your interests, there are countless seminars, workshops and talks which will help to extend your horizons; I found the Centre for Gender, Identity and Subjectivity (CGIS) particularly helpful. Also ensure you really use your supervisor to think through ideas and discuss problems – the amount of contact time is a huge benefit of Oxford. I am very grateful to Kathryn Gleadle for her invaluable help, and I really enjoyed the opportunity to discuss and refine my arguments with her throughout the year.

Yet perhaps the best advice I can offer is to see the thesis as a discovery, not something that needs mapping out from the start. There is no ‘right’ way to go about it: everyone will have their own strategies and ideas, and these will inevitably change along the way. Likewise, there is no ‘perfect’ topic. I was often told the thesis was an opportunity to follow my interests, and while this is true, I think it is helpful to see it as a chance to develop existing interests while also discovering new ones. Had I viewed it in these terms, I would have found choosing a topic less daunting.

The thesis, then, is hugely rewarding because it enables you to discover sources and topics you never would have considered otherwise. Having never studied children or education, I was surprised by how much I enjoyed this scholarship, and found the thesis the most fulfilling – albeit also the most challenging - part of my degree. Discovering your niche and developing original arguments makes you feel a huge sense of achievement – and rightly so. Your thesis is something you will be proud of for many years to come.