Grant Dalton studied History at University College, Oxford, graduating with a first in 2018. He won the Joan Thirsk Prize for the best pre-1700 thesis in the university for his dissertation on dress and dissimulation in the Middle East in the 1670s. He attended Richmond School, a comprehensive school in North Yorkshire, before coming to Oxford and is currently taking a year out before beginning a career in public policy and communications. 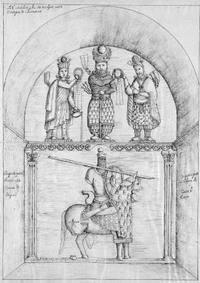 I have always been a very indecisive person when it comes to big decisions. I often take far too long to decide on important things, and vacillate between the different options – a good characteristic, I suppose, for a historian trying to weigh up evidence, but not great for my life!

My thesis was a product of these vacillations. To begin with, I was unsure whether to apply for History or for Middle Eastern Studies at Oxford, after attending a UNIQ summer school in the latter subject. I only made the decision a couple of months before applying to university, opting to go for history as it gave a greater range of material to study. But I have always been very interested in the Middle East, and took all the opportunities I could to study this part of the world.

When it came to deciding on my thesis topic, too, I was unsure. I really wanted to think about some of the questions that interested me most in the topics I had studied thus far: especially questions about encounters between different cultures, the changing power dynamics of these encounters and how identity and early colonialism were forged by them. I liked thinking about these questions for the things they revealed both about historical actors and about us: how we thought about ourselves and others, and how humans constantly categorise and interpret others.

However, I was also scared. What if I couldn’t find any sources to study on this subject, or what if language barriers – I can’t read Arabic, Persian or Turkish – prevent me from

progressing? So at first, I played it safe, and decided to do my thesis on a more familiar subject, the English Reformation. I met up with my supervisor, and dutifully trailed to the Oxfordshire County Archives, lacking any real inspiration but determined to do something safe. Predictably, the project fizzled out, due to my lack of any new ideas on the subject! So back to the drawing board.

I tried a little further from home, looking at some letters from an Elizabethan merchant in the Middle East in the British Library, but I found the handwriting difficult to read and the content uninspiring. Finally, towards the end of my second year summer, I started reading what I really wanted to think about – the cultural codes of European encounters with Middle Easterners. Reading Alison Games’ Web of Empire, I came across a reference to travellers dressing up as Middle Easterners in the Turkish and Persian empires, breaking into mosques and ‘playing’ as Muslims – and I was hooked.

I found a new supervisor, Professor John-Paul Ghobrial, a specialist in the sort of global cross-cultural encounters that, for me, make the early modern age the most remarkable period of human history. John-Paul pushed me towards some more sources for the sort of cultural cross-dressing I wanted to study, and I began to read them. Slowly but surely, a period, the early 1670s, and a cast of characters, the colleagues, friends and rivals of the illustrator and traveller Guillaume-Joseph Grelot, crystallised in my mind.

I found the process of researching and writing my thesis difficult and time-consuming, but also hugely invigorating. Two of the three main sources I used were in French, which posed some problems, but not insurmountable ones – both had contemporary English translations available online, and I could always fall back on my A-Level in the language. Some of the concepts I encountered were difficult to understand, especially regarding the semantics of dress, and I learned more about seventeenth-century Persian styles of tunics than anyone ever needs to! But I also produced a work that I was hugely proud of, and that was unmistakeably mine. Some of the ideas I came out with in the thesis – about how travellers saw the Middle East through the prism of contemporary theatre and masquerades, or how they saw their ability to establish identity through the medium of clothing as giving them greater power than local people – are ones I am still very proud of, and still believe to be important and true.

If I had one piece of advice for potential applicants, it would be to follow your historical interests, wherever they lead. The history degree at Oxford offers so many opportunities for detailed research, to narrow down on your own interests and discover a subject that means a lot to you, that are worth exploring. Even as an applicant, find a historical subject that fascinates you and try to learn everything you can about it, however obscure it is – Oxford has a place for all histories, big and small.