Tom Hurleston went to Aquinas Sixth Form College, Stockport and studied History at Brasenose College. After graduating in July 2018, Tom was awarded the Richard Cobb Thesis Prize from the Oxford History Faculty for best undergraduate thesis on European History. Tom’s thesis was supervised by Professor David Hopkin and was on the subject of French culture, society and politics as told through board games, 1770-1830. 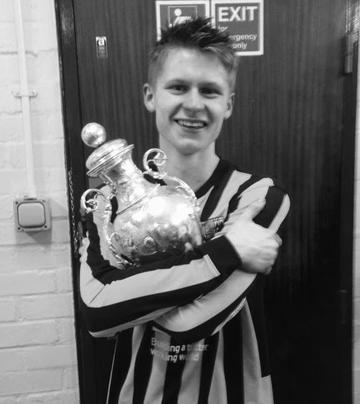 The process of choosing my thesis topic was something of a planned accident. Planned from the perspective that I already possessed an interest in eighteenth century French history prior to Oxford and knew that if the opportunity arose to do a thesis in this area, I would seize it; accidental in in the sense that the subject-matter only materialised halfway through my Second Year. Having studied aspects of the French Revolution at A-Level, while at Oxford I chose to deepen this understanding by taking the Further Subject on Culture and Society in France from Voltaire to Balzac in my Second Year. During one tutorial our tutor mentioned the idea of a themed board game which emerged to celebrate the Revolution of 1789. Outside of tutorials I began to research this idea and found a magnificent Rotheschild collection of board games held at Waddesdon Manor, Buckinghamshire.

I conducted my research at Waddesdon Manor and in Oxford, thanks to digitalised versions of the games. I also drew on the online archives of the Bibliothèque national française, to compare imagery contained within the Waddesdon collection. Bolstered by historian Lynn Hunt’s work on the ‘politicisation of the everyday’, the search for secondary literature led me outside the usual haunt of a History undergraduate in the Radcliffe Camera to more diverse surroundings such as the Weston, Taylorian and Sackler libraries as well as a number of college collections. I found that board games offered a unique subject matter, straddling the boundaries of popular imagery, consumption, leisure, ephemera and pedagogy. I labelled them (rather aptly so I thought) ‘archival nomads’, for their ability to defy typical archival classifications – an issue I addressed in my introduction.

The most challenging aspect of any thesis is how to extract the most detail from one’s sources. This is intellectually stimulating but also difficult, as it requires a higher level of source evaluation than the typical undergraduate essay. An unusual aspect of my thesis was the reliance on visual primary sources, as opposed to purely textual documents. Text was integrated into the games themselves but in the absence of accompanying documentary evidence (most of which had been destroyed), identifying references to eighteenth century literature, theatre and popular culture became most important. The rich iconography of the games provided ample material about which to write, from depictions of the storming of the Bastille, the Tennis Court Oath and the October Days to more subtle references about courtship, fashion and enlightenment endeavours.

The majority of the games I studied were direct derivatives of le jeu de l’oie, known in English as the game of the goose. In the traditional 63-square edition of the game, certain squares lead to specific forfeits or rewards. The 58th square, for example, typically depicts death or some allegory of it; the misfortune of landing on this tile requires players to begin the game again. In the aforementioned ‘Game of the Revolution’, the 58th square depicts a crowd with heads on pikes above the names of the Marquis de Launay, Joseph Foulon, and Louis Bertier de Sauvign. This kind of emblematic detail leveraged the rules and iconography as cues to meaning.

Gender also played a role in the games. For example, ‘The Little Game of Love’ (which replicated a much earlier board game) has two circular paths and two sets of forfeits, one for each sex. For the purposes of play, male and female players are paired. On the path reserved for male players, for example, the first punishment they may encounter is ‘a black-eye’ (coquarde). The game is silent on the cause of this infliction, but the accompanying forfeit orders the guilty party to pay one counter to the pot and kiss the hand of his female counterpart, perhaps as a sign of penitence for his aggression. Details of this kind readily sprang from the playing surface of each game and offered an interesting perspective on eighteenth-century French social mores (mœurs). In a game about the Enlightenment, players are led on a path from innocence to virtue. Each of the 77 squares bears a vice or virtue followed by an instruction. ‘Ignorance’ on square 61, for example, orders players to return to ‘étude’ (study) on square 58. This kind of story-telling pre-empts much of the thinking behind modern children’s games.

My supervisor was very helpful in refining my focus and offering a sounding board for ideas, suggestions and questions about French print culture which by lapse of time had become obscure. Visual sources can be just as rich, productive and diverse as textual documents but they require a careful appreciation of contemporary imagery, audience and publisher provenance in order to understand why engravers chose to depict certain ideas, people and events in the ways they did. The thesis went on to explore the diverse ways in which the games reflected the society of which they were a part as the broader social purpose of games changed over this period, from the pastime of adults to the playtime of children.

For those interested in the subject I would recommend this 2012 exhibition at Waddesdon. For a wider understanding of the enlightenment, Oxford University’s Voltaire Foundation continues to publish brilliant books, articles and research projects on the subject.

I found few academic pursuits at Oxford more pleasurable than the time spent producing my thesis. Alongside history, I enjoyed playing football and found both offered a helpful release from each other. I hope to carry the rigour, discipline and perspective I learnt from both into my legal studies.