Transnational Resistance is an international research network headed by Professor Robert Gildea. The research will question some of the basic assumptions about the history of resistance in Europe, exploring the lives of transnational resisters.

The international network, funded by the Leverhulme Trust and the Gerry Holdsworth Special Forces Trust, and comprising seven partners across Western and Eastern Europe, will be studying the phenomenon of transnational resistance – defined as resisting outside one’s country of origin – how it emerged from economic migration, political and religious exile, flight and deportation; how encounters, exchanges and misunderstandings took place between transnational resisters in camps, prisons and ghettoes, selected resistance networks and key resistance events; and how the afterlives and memories of these resisters evolved in relation to dominant post-war narratives of national liberation, the Cold War and the Holocaust. 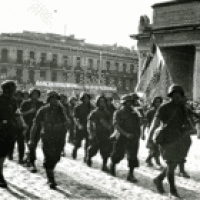 The story of transnational resistance has been written over by three dominant narratives of the postwar era: first, the narratives of national liberation elaborated in countries that emerged from wartime defeat, occupation and liberation by foreign powers; second, Cold War narratives that stifled narratives of anti-fascist struggle in the West and non-communist or anti-communist struggle in the East; and third, by the narrative of the Holocaust which highlighted Jews as victims rather than as resisters. The International Network will multiply perspectives from scholarly vantage-points in different parts of Europe to explore the emergence, trajectories and afterlives of transnational resistance in very different theatres, from the Pyrenean frontier between Spain and France to the borderlands of Russia and from the flatlands of the Netherlands to the mountains of Yugoslavia and Greece. Political, historical, cultural, religious, economic and ethnic contexts were very distinct in these theatres and inflected the engagement of resisters in activism, their encounters and exchanges, and their afterlives and memories in very different ways. The Network will bring together leading historians of the Second World War who are working in specialist research institutes and on parallel projects across Europe in order to confront concepts, methods and evidence in this field. This will produce a new and exciting interpretation of the ‘long’ Second World War between the Spanish Civil War and the onset of the Cold War and make a significant contribution to the practice of transnational history.