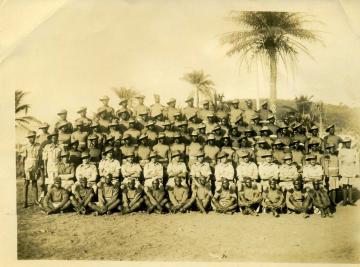 'The new Twentieth Century Global History paper was introduced in 2016-17 to replace General History XIV, a world history paper that covered 1941-1973. The new paper covers 1930-2003 and concentrates on global history, which makes connections between events and developments on a global scale. It works in parallel to the new General History XIII paper, Europe Divided, 1914-1989.'

The new Global Twentieth Century History paper aims to place the centre of gravity of the course outside Europe, whilst acknowledging multiple perspectives in exploring the period 1930-2003. The reading of this paper must be contextualised amidst a wave of efforts that Oxford is finally making to ‘decolonise the heavily Euro-centric curriculum’ after a series of protests, sit-ins and petitions by the student body spearheaded by campaigns such as Rhodes Must Fall. Along with the establishment of this global history paper a year ago, the university has also recently announced that History students at Oxford University will have to take at least one of these papers over the course of their degree. In addition, following a campaign by a History student, Billy Nuttall, Oxford increased the prize for the best undergraduate thesis in African history from £75 to £150. The prize for the best undergraduate thesis in British history (awarded by the Gladstone Trust) remains £500. These successes, though they are the first steps in reforming an outdated, white curriculum in an increasingly diverse student-body, are assurances that the university is listening to the voices of students who want a curriculum that caters for all of the diversity of the student body, rather than just espousing a selective Euro-centric narrative.

As two of the first cohort of students studying the global history paper in 2016/17, we have been pleasantly surprised at the fact that, unlike most other papers available in undergraduate level history, the global South is the centre of focus and Europe is the periphery. The common feeling that students who study this paper get is how broad and dense the paper is: the global South was bubbling with activity during the period from 1930 to 2003, so much so that it is quite surprising how for so long the Oxford curriculum has managed to promote a very Eurocentric narrative on this period.

Taking women’s liberation as an example, along with women’s protests in France, Germany and the UK in the 1960s, there were protests too in Mexico and indeed, the UN decade for women from 1975 – 1985 held international conferences discussing women’s rights in Mexico City, Nairobi and Copenhagen. These conferences were crucial in fostering trans-national networks and conversations about women’s rights in countries across the globe. Even the Second World War, arguably the most widely studied subject amongst historians in schools and universities today, often forgets that more than a million African soldiers fought in the war. Discussions about the Cold War too would be incomplete without reference to China, Cuba, Vietnam, Angola, Ethiopia and the Congo. Indeed, studying the global history paper feels like revisiting an old house for a tour, and realising that during your first visit there you only actually saw one room in the house.

The subjects we have studied this term have been well and truly ‘global’, covering an unparalleled geographical scope. Our first essay had us investigating the extent to which the Second World War marked the end of European global supremacy under the explicit instruction not to dwell on Europe and the United States. A thrilling sense of liberation set in as it dawned on us that nothing from Latin America to Indonesia was off-limits. Subsequent essays have similarly taken a broad chronological and geographical focus. One week, for example, we were tasked with assessing the success of the United Nations between 1930 and 1989. What is striking about the paper is not just its uniquely global perspective but the diversity of themes which are addressed. Certainly, the tutors have not been coy in setting questions which touch not only on decolonisation - the cause célèbre of curriculum debate - but on genocide, Islamism and famine.

The breadth of the paper may be its strongest asset but at this embryonic stage it can sometimes feel a little too ambitious. Every question is unfailingly fascinating but by the end of each tutorial it always felt like we had only scratched the surface of what there is to learn. The requirement to discuss topics as nebulous as the legacy of the Second World War, the United Nations or gender across lengthy time periods, sometimes of almost up to a century, with a global outlook inevitably sacrifices some measure of depth and precision. This can make the process of research frustrating and bewildering, especially since the relatively nascent discipline of global history is yet to acquire extensive shelves of books explicity dedicated to the subject.

Ultimately, the Global Twentieth Century paper represents a step in the right direction. The recent controversy surrounding the imbalanced thesis prizes highlights how lopsided the Oxford curriculum remains with respect to regional diversity. If there is one achievement that can be ascribed to this paper, aside from its inherently interesting themes, it is that it normalises the presence of non-European history. The fact remains that very few students emerge from the British education system having been exposed to any history beyond the Anglosphere. Along with the new requirement from next year to study a non-European paper, this course rights an important wrong. We can only hope the History Faculty has started as it means to go on.