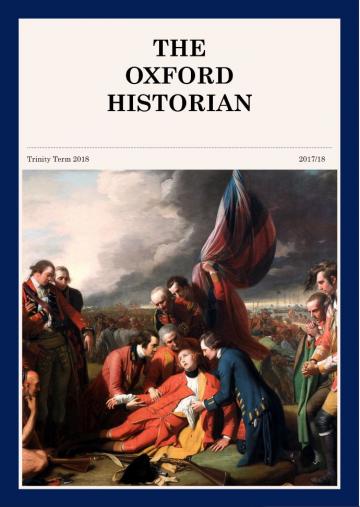 So many of the questions which preoccupy historians today are concerned not so much with events, and their rather constraining frameworks of causes and consequences, but with shape, experience, and scale. If works of History published, say, forty years ago tended to take an event and explore its gestation, dynamics, and after-effects, the work of many historians is now focused on mapping (sometimes literally) more amorphous processes, and rediscovering their meanings, viewed not so much from outside as from within. This helps to explain the simultaneous interest in longer chronologies and in specific moments of experience, be those ones shared across wide communities, or captured with particular intensity through individual lives.

The field of Global History well demonstrates those trends. The welcome success of Peter Frankopan’s Silk Roads indicates the desire of a History-literate public to understand historical trends across new horizons; while other work in the field has focused on particular moments of encounter, between different worlds, encapsulated in the individual experiences of migration. The Annual Alumni Lecture given in May by Erica Charters, the director of the Global History Centre, gave life to these shifting shapes of Global History. Her lecture, which we re-publish in this issue of The Oxford Historian, conveys the sweep of global trends, both of imperial conquest and the consequent two-way spread of diseases, across the changing shapes of the Atlantic world of the eighteenth century. Yet, the impact of those changes was, above all, individual. As Matthew Crampton’s article demonstrates, the related phenomena of indentured labour, penal transportation and, above all, slavery were not just global trends which occurred “out there”, but ones that were intimately connected with the lives of many British people of the era.

Central to these processes was of course the overarching political carapace of empire. Britain, and perhaps Oxford in particular, has been experiencing in recent years an overdue coming to terms with the legacies of empire. There has been much that has been positive in this process, notably the way in which it has encouraged our students to debate the interconnectedness of present and past. But we risk trivialising the study of empire if we reduce it to a particular definition. Empire, as recent events have well demonstrated, is one of the most obstinate continuities of History. The forms of empire may have varied greatly, but its reality has endured. This is a point which is very well made in John Darwin’s contribution to this issue. John’s long and immensely distinguished career in Oxford in many ways traversed the transition away from a certain end-of-empire history, which dominated the British historical profession in the 1960s and 1970s, to the new fields of Global History at the end of the century. But, as he rightly emphasises in this article, in the twenty-first century the phenomenon of empire has returned centre-stage, to seem more relevant, and more contemporary, than ever.

The shapes of History change, and so does the structure of our degree. Many of you will be familiar, from articles in previous issues, with the reforms we have made to the content of the undergraduate degree, intended notably to give non-European history rather greater prominence, and to bring in thematic papers that cross chronological and thematic boundaries. That is now coming into full operation. The students who started in October 2017 will be the first to follow the revised curriculum; but, ahead of that, we have also made a change to the examination structure. This summer, almost as you read this issue of The Oxford Historian, second-year Historians will, for the first time be doing an examination which will count towards their Finals. We have moved the examination in the outline paper in British History from the end of the course to the end of Trinity Term in the second year; and we have also changed it from a conventional three-hour examination into a take-away examination, whereby the students will write over a period of ten days three essays (each of 2,000 words) from an examination paper, across the latter half of Eighth Week, and the whole of Ninth Week. There are many reasons for doing this, not least to alleviate the stress of revising a range of papers at the end of the Third Year. But, above all, the change is intended to diversify the skills we assess in Finals. With a compulsory thesis, an extended essay (tied to the Special Subject) and now a take-away examination, students doing Finals in History will be tested in a variety of ways, alongside four conventional three-hour examinations. Older generations of alumni will no doubt recall the particular challenge – or medieval ordeal – of sitting ten three-hour examinations in one week for Finals; but I am not sure that they would regard the new mixed structure, and more especially the innovation of an examination at the end of the second year, as less of a challenge.

This is the last issue of The Oxford Historian, in which I will have had a hand. I pass the responsibility of Chair of the Board of the Faculty to John Watts this summer, after a very enjoyable and fulfilling three years as Chair. There has been much to do, not all of it foreseen, but plenty has happened that has helped to move the faculty forward, not least through the essential and generous support of our alumni community. John will continue that process with great energy and intelligence, and his contribution to this issue will give you a foretaste of what he intends to do.

- Martin Conway
Chair of the History Faculty Board
Balliol College