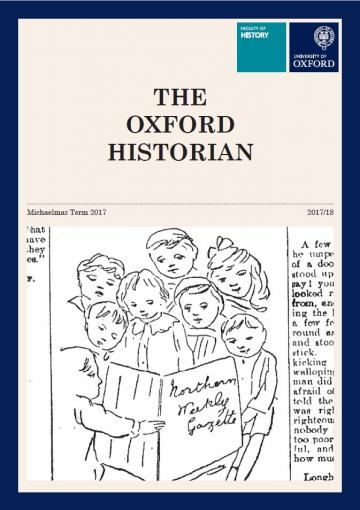 The Carlyle Lectures : Office and Anarchy

Are anniversaries the enemy of good history? In an era when we uncertainly sense that the rules of the past no longer apply as they once did, the prominence of historical anniversaries continues to increase. Some of this of course is the work of a media and publishing industry which likes nothing more than to Google present and forthcoming anniversaries. But the more serious business of History too dances to the rhythms of anniversaries. Thus, this year we based our annual Alumni Lecture (given by Steve Smith) around the centenary of the Russian revolution, while also hosting a re-enactment of Martin Luther’s quin-centenary of posting the Ninety-Five Theses, an event which reached its peak this October. The role of historians at such commemorations is in part that of trouble-fêtes, pointing out that the more cherished stories, such as that of Luther hammering his theses to the church door, are in all probability retrospective inventions. But it also falls to historians to provide the means to comprehend the anniversaries thrown up by the dictates of modern western calendars. Some of these events lend themselves better than others to the anniversary game. The centenary of the First World War has provided multiple occasions for historians to reflect on the enormous scale of the conflict, notably in Oxford by trying to nudge attention away from the omnipresent Western front, and towards the parallel conflicts in Italy, Russia and the Middle East. The Luther commemoration, too, has provided occasions for societies in central Europe to reflect on their complex confessional pasts, even if in Britain it has often become intertwined with the noise of Brexit. But, perhaps more surprisingly, the centenary of the Russian revolution of 1917 has struggled to act as a stimulus to wider debate, either about the subsequent history of Russia or about the social and political upheavals of the post-1918 era of which it was the harbinger. The determination of the Bolsheviks to storm the future which for so long seemed to epitomise the mood of the European twentieth century does not seem to have the same relevance to our very different times.

If these anniversaries are to be more than commercial and media opportunities, they must provide the means for historians to convey something of the substantive content of the past. Most of the events we study were irredeemably messy, violent and complex. That truth does not lend itself to soundbites, nor still less to digestible lessons for the present day. But there is a great deal in current historical investigations of slavery and empire which has a broader if challenging relevance to the contemporary world. This is what underpins our initiative to develop teaching resources for GCSE History that Miles Larmer describes elsewhere in this issue. But much the same too is true of female emancipation and the much more contested history of concepts of gender equality across the nineteenth and twentieth centuries, all of which will undoubtedly be given new visibility by the forthcoming centenary of (partial) female suffrage in Britain in 1918. In all of this, it falls to institutions such as the History Faculty not simply to assert some facile relevance of History but its complex importance for the present.

Chair of the History Faculty Board
Balliol College

We could love to be able to keep in touch with you to let you know about upcoming events, news from the Faculty and to send you the Faculty e-newsletter The Oxford Historian. Make sure your details are up to date here!