The execution of Mary, Queen of Scots: a European news sensation

The execution of Mary, Queen of Scots: a European news sensation 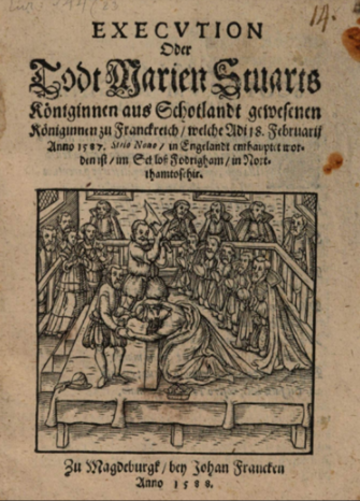 An account of the ‘execution or death of Mary Stuart’ – Mary, Queen of Scots in 1587

I am a 3rd year DPhil student working on early modern German print and how it reported and responded to the English Reformation. My research looks at early forms of printed newspapers in the 16th century and how they recounted key events.

One type of ‘early newspaper’ was that of a short pamphlet, up to about 20 A5 pages long, which provided an accessible account of a recent event. Their small size and cheap paper made them affordable for the average early modern reader. Pamphlets often also included a woodcut image or engraving on the title-page to grab the audience’s attention and encourage them to buy the work. The pamphlet here (Image 1) is an account of the ‘execution or death of Mary Stuart’ – Mary, Queen of Scots in 1587. The woodcut illustration shows the moment of execution – including a crown by Mary’s side to indicate her status. This pamphlet was published in 1588, in Magdeburg, in the north of the Holy Roman Empire (modern day Germany).

The execution of Mary, Queen of Scots was a huge news event across Europe. Mary was forced to flee Scotland and seek protection in England in 1567 after a Scottish rebellion against her rule. Elizabeth I of England kept her under house arrest for many years. However, as Mary was Catholic and Elizabeth Protestant, Mary became the centre of many Catholic conspiracies and plots against Elizabeth. Elizabeth’s advisors wanted her to execute Mary, ‘to ensure the life of Her Majesty of England and the well-being of the Crown of England, particularly however to stabilise religion’, as the Magdeburg pamphlet puts it. Nevertheless, Elizabeth resisted for a long time – she was related to Mary and did not want to execute a fellow Queen. Eventually Elizabeth agreed and Mary was executed in February, 1587.

Europe was shocked by Mary’s execution. In the Holy Roman Empire, printers published multiple news pamphlets on her execution across the Empire – from Magdeburg to Munich, Cologne and Königsberg (now Kaliningrad in Russia). The pamphlets all followed a similar formula – a brief explanation of why Mary had sought refuge in England, followed by reasons for her execution and concluding with a detailed description of the day of her death.

The Holy Roman Empire consisted of lots of different states with varying degrees of independence and were ruled variously by city councils, princes, dukes and bishops. There were Protestant and Catholic states, occasionally bordering each other. As Mary, Queen of Scots was a Catholic, we might expect to see the German news response split on grounds of religion – Catholics mourning her death and Protestants celebrating it. There are elements of this – a pamphlet published in Catholic Munich refers to Mary as ‘condemned from life to death, to which the renowned Queen of Scotland with great perseverance in holy Roman Catholic belief willingly gave herself’, hinting at a view of Mary as a martyr to her religion. However, the vast majority of pamphlets – both Protestant and Catholic – were more concerned about the threat that Mary posed to peace and order in England. The prominence of this approach to Mary’s execution in German print suggests a general weariness of the political and religious upheaval the Holy Roman Empire had faced since the beginning of the 16th century. A pamphlet published in predominantly Catholic Cologne explains that Mary’s execution was necessary because: ‘the life of the Scottish Queen would be the death of the Queen of England, and also the ruination of the well-being of the country and religion.’ This is borne out at the end of the account, which declares that since Mary’s execution ‘all in England has remained quiet and in good peace, and hope that it will continue to remain so.’

The execution of Mary, Queen of Scots was far from the only English event of interest to the Holy Roman Empire. The brief reign of Lady Jane Grey and Mary I’s subsequent accession was followed with great interest, as were the dramatic events of the Spanish Armada. Broadsheets and news pamphlets were an important part of the sharing of information across Europe to a relatively wide audience. They also provide historians with a sense of the connections and networks between different countries in the period, and at the same time reveal the local concerns of the place of publication.