The Crimean Moment and Crucible: Just War, Principles of Peace, and Debates in Victorian Wartime Thought and Culture, 1854-6

The Crimean Moment and Crucible: Just War, Principles of Peace, and Debates in Victorian Wartime Thought and Culture, 1854-6 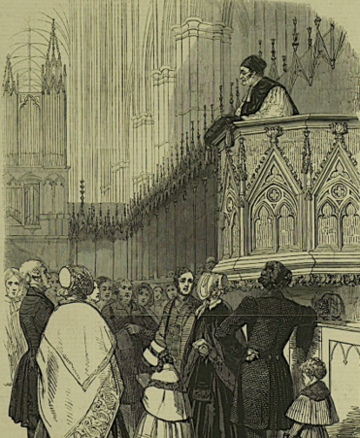 From the Illustrated London News

My research examines religious, intellectual, political, and cultural debates during the Crimean War (1854-1856), the first war on European soil after the end of the Napoleonic Wars, fought by Britain and its allies (Turkey, France, and Sardinia) against Russia. It uses a range of primary sources such as sermons, tracts, treatises, the religious and secular newspaper and periodical press, as well as visual and material sources to shed light on how Victorians responded to the war. The following short article focuses on Victorian sermons and how I use them in my research.

In Victorian Britain the sermon, a religious discourse based on a biblical text, was typically delivered from the pulpit in a church or a chapel. It was a form of oral communication and theological inquiry, and it was a central part of preaching. Most preachers saw their sermons as didactic tools and ‘practical discourses’ which taught members of their congregations how to live according to God’s will: how to become better and how to lead better lives.

Many sermons were published. Indeed, there was a large demand for them. Historians have shown that the sermon was a dominant literary form in Britain from the late 17th century to the late 19th. The evidence from both library catalogues and contemporary views suggests that sermons were hugely popular in Victorian Britain and that they were part of mainstream literature.

Part of my research is examining sermons preached during special occasions of national worship (days of humiliation, thanksgiving days, and days of thanksgiving prayer) observed by the established churches of England and Scotland, as well as by most dissenting denominations, during the Crimean War. So far, I have been able to identify around three hundred sermons. However, this number is nowhere near the actual number of sermons preached during the war.

It is important to remember that not all sermons were published, and that not all of those which were published survive today. So where can one find sermons which do survive in printed form? Most were published as pamphlets, in newspapers, in periodicals, and in bound volumes. A number of these sermons have been digitised and can be accessed in electronic form from Google Books, the British Library, the Bodleian Library, and other digitised library collections. But most of these sermons have not been digitised, and the historian ought to conduct research in archives and libraries which hold newspapers, periodicals, and bound volumes of Victorian religious publications (including tracts, prayers, devotional literature, etc.)

Using sermons, my research uncovers the responses of preachers to the war. My research also examines how Victorian preachers grappled with various complex moral questions: Can Christians ever fight wars, and if yes, under what circumstances? Are the teachings of Jesus Christ in the New Testament fundamentally incompatible with war?

Crucially, my research reconstructs the lively debate between preachers who offered moral and religious justifications of Britain’s war against Russia, and groups such as the Religious Society of Friends (Quakers) and the London Peace Society. The Religious Society of Friends sought to spread the pacifist message that Christianity and war were irreconcilable. The London Peace Society challenged the pro-war message of sermons by disseminating peace literature. This debate between apologists and critics of war was at the heart of sermons. Many pro-war preachers used their sermons to critically review the principles of the Peace Society. The published version of the sermon of the Scottish Presbyterian minister Dr. Robert Lee (Fig. 5) made this explicit on its title page: ‘Containing a Review of the Doctrine Respecting War Maintained by the Peace Society’.

While a war of arms raged in the Crimea, a ‘war of words’ was being fought in Britain. It is this second, home-front ‘war’ which has been overlooked by historians that my research seeks to illuminate.