In the winter of 1577/8, an elderly man arrived at the papal court in Rome, claiming to be the patriarch of a church in Mesopotamia. He had no retinue with him, and only a vague letter of recommendation from the patriarch of Aquileia, whom he had met on his journey to Rome, and who could write little more than that he seemed to be pious and well-educated. The Romans, understandably, received him with some caution. Yet the man, Ignatius Niʿmatallah, had indeed been patriarch of the Syrian Orthodox Church until he was forced to apostatise by the Ottoman authorities, and had abdicated from his see and fled to western Europe. Niʿmatallah was something of a polymath, and, after establishing his credentials in Rome, was active in a wide range of fields, including medicine, science and printing. He advised Gregory XIII on his famous calendar reform and played a prominent role in the establishment of the Medici Oriental Press. He met and impressed European scholars including Joseph Scaliger and Michel de la Montaigne; he also fell out with several prominent Catholics, including his first patron in Rome, Cardinal Giulio Antonio Santoro. He kept up a close network of relationships back in the East, not only with his own church but with those of many different Christian confessions, including the ‘Nestorian’ Church of the East, the Armenian Church, and the Coptic Church in Egypt. 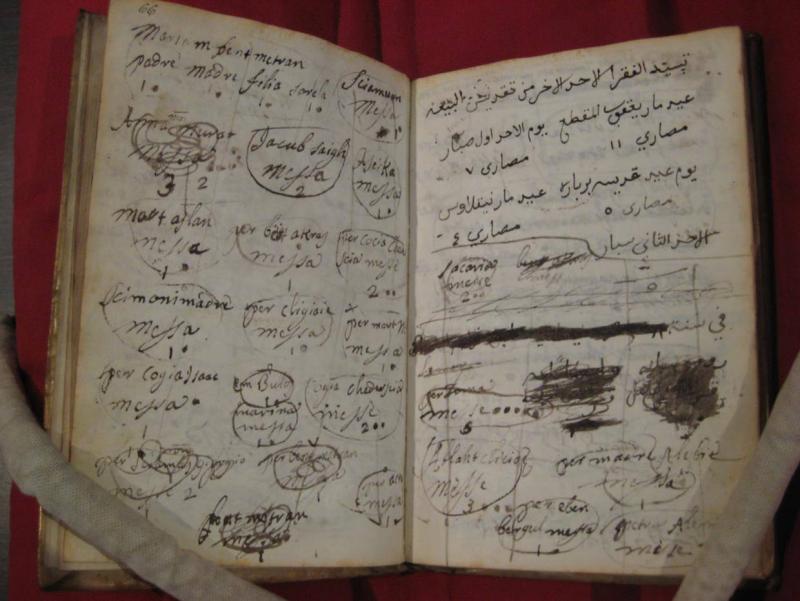 'This manuscript was kept by an Eastern Christian living in Rome in the 18th century. The copyist made a note of the celebration of masses for people he had left behind in the Ottoman Empire, a testament to the memory of loved ones long after the migration from East to West'.

Niʿmatallah was a remarkable figure, but he was far from the only Middle Eastern Christian in the early modern period to journey beyond the borders of the Ottoman Empire and to play an important role in international networks and knowledge sharing. Eastern Christians travelled not only to western Europe, but to Russia, India, and the New World. Yet the stories of these travellers, and of the communities within the Ottoman Empire which nurtured them, have been largely neglected. Early modern Middle Eastern Christianity has tended to fall through the cracks of historiography. Specialists in Arabic and Syriac have usually focused either on Late Antiquity and the early Middle Ages, or on contemporary history. European historians have explored the global spread of Christianity from western Europe in the aftermath of the Reformation, but have generally neglected the pre-existing Christian communities of the Middle East. And Ottomanists have often been affected by an approach to Ottoman society which, overly focused on legal categories, sees Ottoman Christians living rigidly constrained and isolated lives as ‘second-class’ dhimmis (protected religious minorities subject to special taxes and other restrictions). In reality, as is shown by abundant archival, manuscript and material evidence, preserved in diverse repositories across the globe, the position of Middle Eastern Christians within the empire and across its borders was far more complicated, varied, and entangled with other communities, than this picture allows. Their history thus has the potential to enrich our understanding of fields including Ottoman society, global networks in the ‘Age of Discovery’, and Counter-Reformation Catholicism.

This is the goal of the research project on which I work in Oxford, Stories of Survival: Recovering the Connected Histories of Eastern Christianity in the Early Modern World. Stories of Survival, which is supported by a five-year grant of 1.5 million euros from the European Research Council, seeks to demonstrate the importance of Eastern Christianity to early modern European, Islamic, and global history. Our team consists of the Principal Investigator, John-Paul Ghobrial, an Ottoman historian and fellow of Balliol College, whose work on the seventeenth-century traveller Elias of Babylon inspired the project, and three postdoctoral researchers, who cover the main languages relevant to the field: Feras Krimsti is working on Arabic, I am focusing on Syriac, and Tobias Graf is working on European-language sources. Our first aim within the project is to reconstruct a ‘lost archive’ of sources on Eastern Christianity. To this end, we are creating a database of all the Syriac and Christian Arabic manuscripts copied between 1500 and 1750, as well as of the people and institutions associated with them. This will enable us to analyse literary production by the eastern Christian communities of the Middle East on an unprecedented scale; to understand patterns of circulation, translation, and knowledge transmission; and to explore the religious, social and economic dimensions of textual creation. But this work does not only reveal macro patterns and trends. By working so closely with the manuscripts we are also uncovering fascinating details which can provide wider insights into the people and societies under study. Scribes and readers often wrote notes, either in the margins or at the end of manuscripts, some of which provide vivid and often unexpected glimpses of their lives and surroundings. I have found, for example, a Syriac scribal note containing a description of sixteenth-century Mozambique, where the scribe was staying on his way from Iraq to India. I have come across lists of books owned by individuals or churches, records of baptisms and deaths, notes describing wars, rebellions, plagues, famines, earthquakes, apostasies, miracles and martyrdoms. One East Syrian scribe recounted a distressing episode in his personal history: he had been a teacher in Mosul for thirty years but, after converting to Catholicism was, he claims, persecuted by the members of the church in which he had been raised, and had to flee to Rome. This kind of material enables us to write global ‘micro-histories’, relating large developments, such as the growth of Catholic churches in the Middle East, to the experiences of individuals as they inscribed them, sometimes tendentiously, in manuscripts, books and journals. 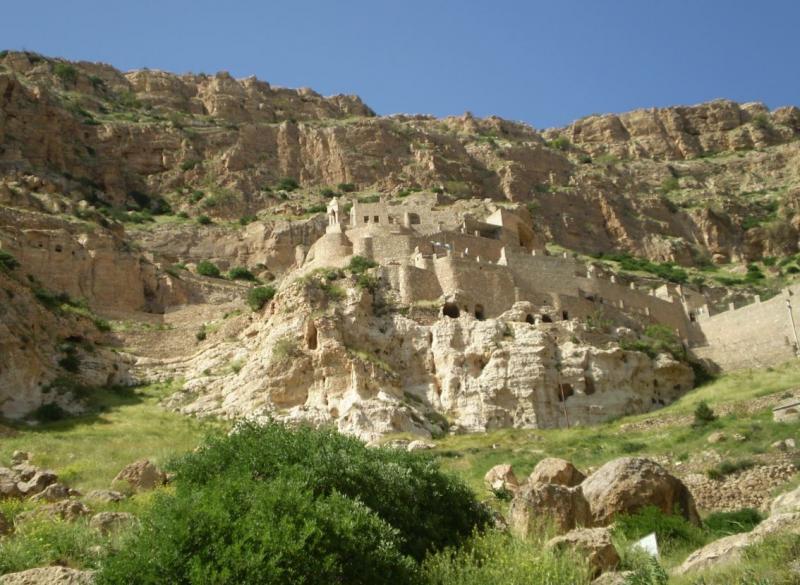 The database is only the first part of our project. We are all conducting independent research into different aspects of eastern Christian histories in the early modern period. All of our work seeks to challenge the outdated paradigms through which scholars have often approached eastern Christianity. I have been working on the sixteenth-century Syriac-using churches of Mesopotamia, and in particular the Church of the East, the so-called ‘Nestorian’ church. In 1552, there was a schism within this church; some of its members seceded and elected a new patriarch, whom, in a historically unprecedented move, they sent to Rome to be ordained by the pope. Despite entering into union with the papacy, the members of this rebel ‘Chaldaean’ church continued to refer to their traditional beliefs and saints—even those who, like the fifth-century patriarch of Constantinople Nestorius, were viewed as heretical by Catholics. Earlier Catholic scholars were puzzled by this paradox, and tended to attribute it to the ignorance of the Chaldaeans about Catholic doctrine. Yet this interpretation risks patronising the Chaldaeans, who in fact seem to have been well-informed about Rome. Rather, the paradox is a problem of perspective. Much of what appears inconsistent about the Chaldaean beliefs and behaviour is resolved when we consider, first, the particular political situation in which they were writing, and, second, their own attitudes towards religious belief and belonging, which were rather more fluid, open to more possibilities, and less focused on doctrine, than those of the Catholics whom they encountered. In the course of this research I have been struck by the close entanglement between the Church of the East and Chaldaeans and another eastern Christian church, the Syrian Orthodox Church, which also used Syriac liturgically but which had very different doctrines and traditions. Traditionally, these churches have been studied largely separately, as if their histories were distinct and could be studied in isolation. My research suggests, however, that we need to reconceptualise this approach: at least in some historical contexts these churches were deeply intertwined, the boundaries between them were sometimes blurred, and their histories must be understood in connection with each other. I hope to explore the possibilities of this new perspective across the rest of the project and beyond.

Since one of the principal aims of Stories of Survival is to demonstrate the relevance of eastern Christian history to different fields, our team has a responsibility to promote our work to an international audience of scholars in different disciplines. We have therefore presented our work at conferences and workshops abroad, as well as organising events here in Oxford to encourage research into topics of particular relevance to the project. Thus in July 2017 John-Paul Ghobrial held a conference on Christians and Jews in Ottoman society, which sought to rethink our approach to religious minorities within the Ottoman empire, and in March 2018 I am organising a workshop on Syriac and its Users in the Early Modern World, which aims to demonstrate, for the first time, the scope of the study of early modern Syriac: the topics of the papers range from polemical poetry in the Middle East, to the encounters of Indian Christians with the Portuguese, and to biblical scholarship in sixteenth- and seventeenth-century Holland. Oxford has also become a hub for a wider circle of historians whose interests intersect with those of our project. Our project associates include Cecilia Tarruell, whose research focuses on migration from the Ottoman and Safavid empires to the Spanish empire, and Vera Tchentsova, who works on the post-Byzantine eastern Christian churches and their associations with Russia. Our team also organises a seminar on New Perspectives in Mediterranean History which brings together local and international scholars for in-depth discussions of innovative research in this field.

Oxford is undoubtedly one of the best places to work in the area of eastern Christian studies. The study of eastern Christian languages (including not only Syriac and Arabic but also Armenian and Coptic) seems to be increasing. All scholars in the field are also benefitting from the availability of new sources online, due, above all, to the vitally important work of the Hill Museum and Manuscript Library (HMML), which is based at Saint John’s University in Collegeville, Minnesota. Our project is very fortunate to have a partnership with HMML that has enabled the History Faculty to bring Salam Rassi, Postdoctoral Fellow in Eastern Christian and Islamic Cataloguing at HMML, to Oxford, as he works on reviewing and analysing their exceptional collection of digital images. Monks and researchers from HMML have worked with libraries across the Middle East and beyond to digitise endangered collections of Christian (and, increasingly, Islamic) manuscripts. HMML have made available online, for example, most of the manuscripts of the monastic and church libraries of Syria and Iraq— some of which have since been destroyed in war. This is a sobering reminder of the present-day resonances of our research. For the first time in centuries the very survival of some eastern Christian communities within the Middle East is in doubt. Wars have forced new waves of migration and global movement; expatriate communities of eastern Christians stretch across the globe and have played an important role in encouraging the study of their histories. It seems more crucial than ever that the heritage of these communities, in all its tangled complexity, should be preserved and studied.

Stories of Survival: Recovering the Connected Histories of Eastern Christianity in the Early Modern World is supported by funding from a European Research Council Starting Grant under the European Union’s Horizon 2020 research and innovation programme (grant agreement no. 638578).