In September 1981, when my doctoral funding ran out, I left Oxford, with an unfinished DPhil thesis and no job: in September 2016 I returned, to take up the Chichele Chair of Medieval History and a fellowship at All Souls College.  The intervening years have been an unplanned and serendipitous journey via several universities across two continents—and my return here was certainly never part of any life-plan or career goal.  My visits to Oxford in the interim could be counted on the fingers of one hand so; as my first academic year in the chair draws near its close, it’s time to take stock.

"For things to remain the same, everything must change."  Lampedusa’s famous remark encapsulates many of my experiences.  To be sure, Bodley is still at the heart of the University, and the entrance to the Lower and Upper Reading Rooms from the quadrangle is still in exactly the same place.  Even the aromas haven’t changed, remembered as bodily experiences that suddenly flood back when, after a month (yes, I admit it took a month) I finally made my way there:  the slightly stale air in the Reading Rooms, the smell of disinfectant plus floor cleaner in the women’s loo.  But it’s changed completely: no-one now reads medieval manuscripts in Duke Humfrey.  The huge and heavy volumes of the guard catalogue, with their pasted-in slips that fell out whenever the Victorian glue had disintegrated, have given way to the sophisticated resources of SOLO.  As a student, I never needed to cross Broad Street to the New Bod.  But that’s recently become the Weston Library: in discovering its Rare Books and Manuscripts Reading Room, I experience a different culture shock.  I’ve never been in the room before, but it’s an intensely familiar space—because its architect also designed the magnificent modernist-Egyptian reading room of Cambridge University Library, where I studied as an undergraduate and in Oxford vacations, and to which I have returned frequently over the years.  Here, perhaps, is a place where I can feel immediately at home in this new Oxford. 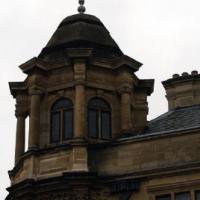 Nor is the History Faculty itself where it used to be, diagonally opposite new Bod in the former Indian Institute building.  Only one colleague remains there: I track down the Faculty administration, convenient seminar rooms and the Chair’s office in a former school on George Street. Meanwhile, the History Faculty Library is now resplendently housed in the Radcliffe Camera, so I need to remake my mental map of which books live where.

Much else has confused my mental maps, starting with a different college.  But life as a fellow, perhaps particularly of All Souls, was never going to be analogous to life as a graduate student at Corpus.  As a student, I had ventured with trepidation into All Souls for supervisions, and although I now hold the same chair as my supervisor, I’m determined not to create the same feelings of intimidation and remoteness as he generated all those years ago.  If anyone is intimidated, it’s me.  It takes a while to acclimatise to the formalities of All Souls, where unspoken codes of deportment and procedural conventions are quite unlike anything I’ve ever encountered anywhere else. During the first few months my husband fielded frequent enquiries from concerned well-wishers: “How’s Julia coping in All Souls?”  Change comes slowly to such a venerable institution, but I have already made a modest mark, not least in making gluten-free oatcakes and decaffeinated coffee available as standard for anyone.

My mental map of the town is also made anew.  At the outset, we rented a university flat in North Oxford –a distant and unfrequented neighbourhood in my student days.  House-hunting and car ownership rapidly refashioned my sense of topography even more, and after we were lucky enough to have an offer accepted on a house, visits to DIY stores, builders’ merchants, bathroom showrooms and the like have come to dominate my sense of the city.  I may not yet know my way to tomorrow’s seminar or to an obscure library book, but I certainly do know where to get the best value in kitchen work-tops.

In general, I feel like a foreigner in the land of my youth.  The unmistakeably RP speech of my 1960-70s London schooling nevertheless conceals my foreignness.  Prior to my arrival in Oxford last autumn, I lived for nearly a decade in New England followed by more than twenty years in Scotland, so for thirty years my accent marked me as non-local, non-native.  Being an outsider has advantages in university politics, but I have now lost the protection it used to afford.  “So you’ve come back at last!” my new colleagues exclaim.  My private answer is no, I’ve moved somewhere else, somewhere new, somewhere unfamiliar.

And of course the intellectual and institutional landscape around me has been transformed too.  Non-British students were rare in the 1970s, but now constitute a very significant proportion of our student body.  Men and women possessed of different training and perspective are greatly appreciated at every level from undergraduate to senior colleague.  The Oxford History syllabus has evolved too, and has recently gone round the ‘global turn’.  Although the dominance of British history is nowhere near as strong as in the past, its persisting centrality continues to be the distinguishing feature of Oxford’s curriculum in History.  In my graduate student days, English history had not yet morphed into British history. That was a development of the 1980s, one I began to absorb while teaching in the USA, and then came to understand more deeply when  teaching in St Andrews, and, most recently, Glasgow.  And now I am coming to realise that the Britishness of British history here in south-east England is profoundly unlike its Britishness when studied and taught in Glasgow.  Perspective matters: all historians are situated in the time and place of their own lived experiences.

My own experiences have certainly shaped my practice of history, as both scholar and teacher.  My arrival in Oxford in 1981 fresh from a strong tradition of women’s education was my first encounter with co-education.  It was also my first experience of sexism—not that I yet had that word in my vocabulary, let alone knew how to deal with it.  My decade in an interdisciplinary liberal arts environment in the USA coincided with the high noon of women’s history and the emergence of gender history as an analytical category: in learning to mobilise my scholarship in the service of marginal voices and anonymous majorities, I also acquired my own political voice, and a fund of experience that I continue to draw on.  I learned too that the view from the periphery is always different and often clearer than at the centre.  I have taken advantage of that in my work on the politics of the Carolingian empire c.750-900 and, more generally, in rethinking what Europe was like in the aftermath of the disintegration of political rule exercised from Rome, c. 500-c.1000.

At the moment, I’m thinking about things.  Packing—and unpacking—my household sheds new light on my current research project, on how and why objects acquire and retain value and significance, particularly religious significance in medieval Christian practice.  What gets kept and what jettisoned? How does a new environment change an old object?  How does wrapping define as well as protect something?  Why label things?  How does an inventory order knowledge, or misrepresent it?  What does the experience of touch convey that words can’t?  How do objects map social and political networks?  My research into the early history of the cult of relics in Christian tradition has been asking these questions about early medieval relic-objects for some time, but the questions themselves have acquired new life as a result of taking up the Chichele chair.

Although moving from Glasgow to Oxford has certainly been disruptive in the short term, I accepted the position because my previous moves made me certain why it would all be worthwhile in the longer term.  It’s not just that new places enrich me as a human being and a scholar (and yes, Oxford is a new place for me).  It’s much more that I know that change needn’t be the enemy, and that there are real alternatives and choices in university as in personal life.  For things to remain the same, everything must change: the dictum is as true of excellence in Oxford History as anything else—but it sometimes takes a fresh perspective and a new start to appreciate that.