Society, economy and the law in fourteenth-century England 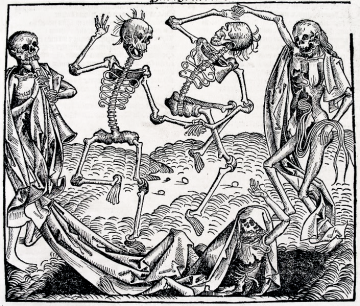 The Dance of Death (1493) by Michael Wolgemut, from the Nuremberg Chronicle of Hartmann Schedel

For decades historians have disagreed about the impact of the Black Death of 1348-9.  Some have dismissed it as an inconsequential blip in England’s long term historical development, others have regarded it as a turning point in the pathway to modernity.  For years the debate was fuelled by uncertainty over the most basic matters of fact: what was the death rate, was it plague or some other disease, and was it primarily responsible for the protracted demographic decline and dramatic social changes of the later Middle Ages?

Since the early 2000s a remarkable surge in inter- and multi-disciplinary research has resolved some areas of this debate and sharpened others.  The mortality rate in 1348-9 is now widely accepted at around 50%, and <10% in the second epidemic of 1361-2.  In 2010 DNA technology identified the Black Death as plague, although medieval plague behaved very differently to modern plague, and also confirmed that not only has the offending pathogen been around for 1,500 years, but also continues to pose a major threat across the globe.  Finally, the start of the two major pandemics (in the 530s AD and 1340s) coincided with sharp deterioration in the global climate.

The epidemics of 1348-9 and 1361-2 stand unchallenged as the greatest health crises in the second millennium.  The recent surge of research has been stimulated in part by the growth of ‘catastrophe’ studies.  Disasters like plague epidemics create stresses that reveal much to about a society’s institutions, habits of mind and behaviour.  Similarly, econometricians are now exploring the likelihood that divergent societal responses to the challenge of the Black Death explain the rise of the North Sea economies during the early modern period and their ‘divergence’ from the rest of Europe.  Either way, it is now scarcely credible that no significant changes ensued, and a fascination with the Black Death has once again gripped the popular and scholarly imagination.

The Ford Lectures in the Hilary term attempted to reassess the main social, economic, legal and cultural responses to the great mortality during the second half of the fourteenth century and to explore how they were shaped by the prevailing institutional structure—the rules, laws and belief systems—regulating social and economic behaviour in England.  This approach provides a more helpful framework for explaining how the same demographic shock resulted in different socio-economic outcomes across Europe than traditional approaches based upon classical economics and class conflict.

On the eve of the Black Death England was a laggard in European terms, when its economic development was choked by deficient demand and extreme rural poverty.  Yet it already possessed some distinctive institutional features.  A secure market in land existed, together with a sizeable market in hired labour and rudimentary credit facilities: while none of these were dominant influences, and while they were still subject to some non-market and seigniorial interference, they had developed to a greater degree than traditionally assumed, diluting the nature of serfdom and the arbitrary powers of lords in the process.  In particular, the growth of the common law had spawned a loosely-connected framework of private courts throughout England deploying broadly standardised procedures.  This provided accessible and cheap remedies for dispute resolution and contract enforcement, and also promoted a pervasive legal culture throughout society based upon respect for the authority of written documents, a commitment to due process, and consistency in the treatment of similar wrongs.

This institutional framework helps to explain the responses to the Black Death in England.  In the early 1350s escalating prices and the sudden shortage of labour posed an urgent threat to the ordained social order, spurring novel attempts to tighten control over serfdom and a raft of ambitious new government legislation.  But the pre-existing weakness of serfdom, the influence of factor markets and the tendency of lords to exhibit restraint meant that this seigniorial reaction was short-lived and ineffective, and commercial forces and open competition for tenants and workers soon prevailed.  Conversions of arcane land tenures to contractual leaseholds and falling rent levels encouraged freefolk and incomers to pour into the servile land market, breaking the old link between personal and tenurial status and fatally undermining serfdom.

Despite the collapse in population, prices of foodstuffs soared then remain high during the third quarter of the fourteenth century, causing the real wages of the mass of the populace to fall below their pre-plague level.  Such contradictory signals have long puzzled historians, but they were caused by a complex and extraordinary combination of events.  The sudden collapse in population sent an enormous shock through factor and commodity markets, but the challenges of readjustment were complicated by a mix of other unanticipated events.  A succession of further environmental and epidemiological crises in the 1360s created unprecedented disruption, volatility and uncertainty: the weather was extreme, livestock epidemics struck repeatedly and the plague of people returned in 1369.   Monetary factors and sluggish supply-side responses to shifting consumption patterns fuelled inflation further.

The argument that coercion and mounting class conflict was not a prominent feature of English society after the 1350s demands a reassessment of the traditional view that the Peasants’ Revolt in 1381 was a revolt against serfdom.  Instead, it was principally a protest against the growth of state power, epitomized by the expansion of novel forms of taxation and the creation of gentry justices of the peace to implement the new labour and price-setting legislation.  Yet the nature of the legislation, and its loose drafting, meant that it was impossible for elected local officials to implement equitably.  The inherent arbitrariness created deep divisions within local communities and generated widespread anger at the poor quality of royal justice among disparate groups which exploded in 1381.

By the mid-1390s a post-plague equilibrium had finally been established.  Gains in GDP per capita flattened, prices sagged and lost their volatility, real wages and earnings levelled, and all sectors of the economy exhibited a tendency towards over-supply.  Government labour and economic policies were now weakly enforced.  In 1400 England was still not at the forefront of European economic development, but responses to the Black Death has changed its institutional framework in important ways.  Land had become more mobile and accessible, and on more commercial tenures; employment levels outside agriculture were very high, even in the countryside; government had established itself as a standing authority in social policy; the country’s legal framework and culture was unique and accessible; and serfdom had all but disappeared.  England now possessed an institutional framework to capitalise when population and the economy picked up once again in the sixteenth century.