Scottish Towns and Urban Society in the Enlightenment

Scottish Towns and Urban Society in the Englightement, c.1745-1820

Scottish towns changed dramatically during the eighteenth and early nineteenth centuries. They grew in size and altered in character. But was there, as in England over the course of the 'long' eighteenth century, what has been described as an 'urban renaissance'? 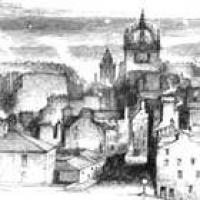 Historians know a great deal about Scotland's larger towns during this period - industrial Glasgow, and the mushrooming manufacturing town of Paisley, and the more balanced growth of places like Edinburgh and Aberdeen. Much less is known however about the middling-sized and smaller places, with populations ranging from 1,000 to 10,000. It was in towns such as these that most of Scotland's expanding urban population lived.

Some of these places have been studied in some depth in books by former Dundee PhD students Paula Martin (Cupar) and David Alston (Cromarty). Dundee itself has been subject to close investigation, the results of which were published in Victorian Dundee: Image and Realities (2000), with a further volume, on the late medieval and early modern burgh, due for publication in 2008. The initiator of this AHRC-funded project, Dr. Bob Harris, formerly (until 2006) at Dundee, and now a Fellow of Worcester College, Oxford, piloted a systematic, in-depth study of the main Angus burghs, which was published in the journal Urban History and won the H.J.Dyos prize for the best article submitted to that journal in 2006. The methodology used for the Angus burghs' study will be adapted to form the basis for Oxford-Dundee project.

The principal aim of the project is to ask what happened in the smaller Scottish towns. A sample size of thirty is proposed, selected in part on the basis of their location and function. The time-frame is c.1745-1820, prior to what appears to have been a new and grimmer phase in Scottish urban development. There are several research questions, at the heart of which is the issue of what happened, and when. Were there distinctive features of Scotland's urban development?