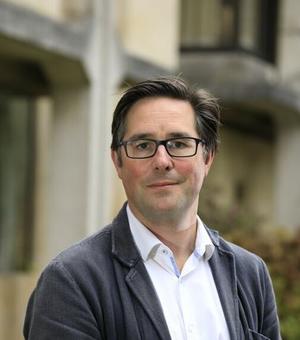 Like all historians, I am interested in people, but unlike many I am also equally preoccupied by things and places.  I'm especially intrigued by what the serious investigation of the built and natural environment does to existing accounts of modern history. My research has consequently often focused on architecture, and I have a special interest in institutions like schools, universities, and churches.

My first book, Oxford Jackson: architecture, education, status, and style, 1835-1924 (OUP, 2006) explored the work of an influential university architect.  My second, funded by a Philip Leverhulme Prize, was Redbrick: a social and architectural history of Britain's civic universities (OUP, 2015). My third, Unlocking the Church: the lost secrets of Victorian sacred space (OUP, 2017), grew out of my Hensley Henson Lectures. Now, as the final part of what's become a trilogy on university architecture, I am working on The University: a material history, for Harvard University Press. Along the way, I have edited or co-edited a dozen or so other books. Current projects include the Oxford Illustrated History of England, for OUP, and the six-volume Cultural History of High Learning, which I am editing with Ning de Coninck-Smith (Aarhus) and Julia Horne (Sydney). I chair the editorial board of the Oxford Review of Education and sit on the board of the Oxford Historical Monographs series. I am currently serving as Senior Responsible Owner and Chair of Project Board for the Stephen A. Schwarzman Centre for the Humanities: the university's largest ever capital project, the result of the largest ever gift given to Oxford.

It is my immense good fortune to be involved in a large number of organisations outside the University. I am chair of the Oxford Preservation Trust, the Oxford Historical Society, and the Victoria County History of Oxfordshire. I am also member of the Fabric Commission of Westminster Abbey and serve on the International Commission for the History of Universities/Commission internationale pour l'histoire des universités.

As professor of social and architectural history I am very glad to discuss graduate supervision with anyone whose interests fall within these fields. In the past, I have been lucky enough to work with a score of doctoral students on subjects ranging from science in the nineteenth century to theology in the twentieth, and on architectural history from the eighteenth century onwards. Recent theses include Elena Porter on country houses, George Entwistle on interwar housing, and David McKinstry on the Italianate style.

To get a sense of the sort of work I have supervised, it is worth looking at the publications of previous doctoral students, not least the book edited by Edward Gillin and Horatio Joyce -- Experiencing architecture in the nineteenth century (2018) -- which is a project that grew out of work we did, and a conference they ran, during their doctorates. Other students have published revised versions of their theses. These include Ursula De Young, whose DPhil thesis was published as A Vision of Modern Science: John Tyndall and the Role of the Scientist in Victorian Culture (2011), Daniel Inman, whose thesis was published as The Making of Modern British Theology: God and the Academy at Oxford, 1833-1939 (2014), Edward Gillin, whose thesis became The Victorian Palace of Science: Scientific Knowledge and the Building of the Houses of Parliament (2017), Matthew Andrews, whose thesis became Universities in the Age of Reform, 1800–1870: Durham, London and King’s College (2018), Sam Brewitt-Taylor, whose thesis was published as Christian Radicalism in the Church of England and the Invention of the British Sixties (2018), and Graham Harding, who has just published Champagne in Britain: How the British Transformed a French Luxury (2022). Most recent is Neal Shasore's Designs on Democracy: Architecture and the Public in Interwar London (2022). Forthcoming books include David Lewis’ biography of Giles Gilbert Scott and Simeon Koole’s work on touch in Britain, 1870-1960.

I encourage my students to publish whilst working on the DPhil, and they have been very successful in so doing. Sam Brewitt-Taylor won the Duncan Tanner Prize for his essay 'The invention of a "secular society"? Christianity and the sudden appearance of secularization discourses in the British national media, 1961-64', which was published in Twentieth Century British History 24 (2013). Philip Aspin won the Society of Architectural Historians of Great Britain essay prize for his article '"Our ancient architecture": contesting cathedrals in late-Georgian England', Architectural History 54 (2011). Edward Gillin won the same award in 2015 for his 'The Stones of Science: Charles Harriot Smith and the importance of geology in architecture, 1834-1864' (Architectural History 59 [2016]), as well as the Society for the History of Technology's Usher Prize for his ‘Prophets of Progress: Authority in the Scientific Projections and Religious Realizations of the Great Eastern Steamship’ in Technology and History 56 (2015).

The Victorians built tens of thousands of churches in the hundred years between 1800 and 1900. Wherever you might be in the English-speaking world, you will be close to a Victorian built or remodelled ecclesiastical building. Contemporary experience of church buildings is almost entirely down to the zeal of Victorians such as John Henry Newman, Samuel Wilberforce and Augustus Pugin, and their ideas about the role of architecture in our spiritual life and well-being.

In the last two centuries Britain has experienced a revolution in higher education, with the number of students rising from a few hundred to several million. Yet the institutions that drove - and still drive - this change have been all but ignored by historians. Drawing on a decade's research, and based on work in dozens of archives, many of them used for the very first time, this is the first full-scale study of the civic universities - new institutions in the nineteenth century reflecting the growth of major Victorian cities in Britain, such as Liverpool, Manchester, and Birmingham.

The architecture of Keble College

The architecture of Keble College

The architecture of the Oxford mathematical institute

The architecture of the Oxford mathematical institute