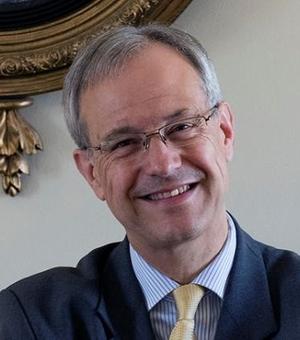 I teach and research the history of later medieval and early modern Britain and Europe. My current research concerns accidental death and everyday life in sixteenth-century England. I have also published in the wider fields of Tudor government, warfare, foreign policy and political culture and the comparison of the English state in this period with others in Europe. I write for BBC History Magazine and History Today, have contributed to radio and television programmes such as In Our Time and Time Team, and speak regularly to Historical Association branches and sixth-form conferences. I am currently a trustee of the Royal Armouries.

My books include Charles Brandon, Duke of Suffolk c.1484-1545 (Oxford, 1988), Early Tudor Government, 1485-1558 (Basingstoke, 1995), (with David Grummitt and Hans Cools) War, State and Society in England and the Netherlands, 1477-1559 (Oxford, 2007), Henry VII's New Men and the Making of Tudor England (Oxford, 2016) and The English People at War in the Age of Henry VIII (Oxford, 2018), a revised version of the James Ford lectures in British history which I delivered in 2015. I have edited volumes on Cardinal Wolsey, Arthur Tudor, Prince of Wales and the courts of England and the Low Countries in the Later Middle Ages.

Publications derived from the Economic and Social Research Council project of which I am principal investigator, written with Tomasz Gromelski, include 'Deadly beasts of Tudor England', BBC History Magazine, 14/13 (December 2013), 43-7, ‘Sport and recreation in sixteenth-century England: the evidence of accidental deaths’ in Sports and Physical Exercise in Early Modern Culture, edited by Angela Schattner and Rebekka von Mallinckrodt (Abingdon, 2016), 49-63 and ‘Coroners’ inquest juries in sixteenth-century England’, forthcoming in Continuity and Change.

I supervise research students working on later fifteenth- and sixteenth-century English and international history, a number of whose theses have been published in revised form as books. These include P.R. Cavill, The English Parliaments of Henry VII, 1485-1504 (Oxford, 2009); Yuval Harari, Renaissance Military Memoirs: War, History and Identity, 1450-1600 (Woodbridge, 2004); Tracey Sowerby, Renaissance and Reform in Tudor England: The Careers of Sir Richard Morison c.1513-1556 (Oxford, 2010); and Monica Stensland, Habsburg Communication in the Dutch Revolt (Amsterdam, 2012). Others have published articles derived from their theses, such as Andrew Boyle, ‘Hans Eworth's portrait of the Earl of Arundel and the politics of 1549-50’, English Historical Review, 117 (2002), 25-47, Kirsten Claiden-Yardley, ‘Tudor noble funerals’, in The Howards and the Tudors: studies in science and heritage, ed. P.G. Lindley (Donington, 2015), 34-42, Mark Geldof, ‘The Pike and the Printing Press: Military Handbooks and the Gentrification of the Early Modern Military Revolution’, in International Exchange in the early modern Book World, ed. M. McLean, S. Barker (Leiden, 2016), 147-68, James McComish, ‘Defining Boundaries: Law, Justice, and Community in Sixteenth-Century England’, in Legalism: Community and Justice, ed. F. Pirie, J. Scheele (Oxford, 2014), 125-150 and Tim Wade, ‘Richard Pace and the Psalms’, Journal of Ecclesiastical History, 73 (2022), 57-78.

My current research falls into three areas. I am Principal Investigator of a project funded by the Economic and Social Research Council on 'Everyday life and fatal hazard in sixteenth-century England'. This is analysing some 9,000 coroners' inquests into accidental deaths to see what they tell us about everyday life, work, travel and leisure in Tudor times. I am writing a book to present the findings of this project. Thereafter I hope to work on the relationship between aristocratic power and the patronage of renaissance culture in sixteenth-century Europe north of the Alps and I retain a long-term research interest in the reign of Henry VII.

More information on Tudor accidents can be found here.

The English People at War in the Age of Henry VIII (OUP, January 2018)

The English People at War in the Age of Henry VIII (OUP, January 2018)

Henry VIII fought many wars, against the French and Scots, against rebels in England and the Gaelic lords of Ireland, even against his traditional allies in the Low Countries. But how much did these wars really affect his subjects? And what role did Henry's reign play in the long-term transformation of England's military capabilities?

The reign of Henry VII is important but mysterious. He ended the Wars of the Roses and laid the foundations for the strong governments of Henry VIII and Elizabeth I. Yet his style of rule was unconventional and at times oppressive. At the heart of his regime stood his new men, low-born ministers with legal, financial, political, and military skills who enforced the king's will and in the process built their own careers and their families' fortunes.