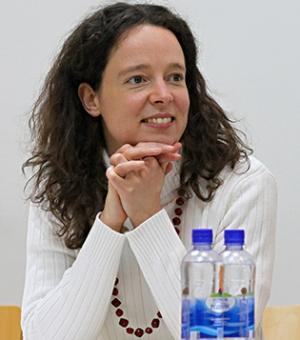 My research focuses on nineteenth and early twentieth-century Russian social and cultural history, and I am particularly interested in interdisciplinary approaches. I have worked on the history of popular religion, and its connection with modern ideas about science. My current project about Russian amateur musical culture allows me to focus on material culture, gender, sociability, and regional history. One focus of this project is Russia's Perm province, whose capital Perm is Oxford's twin city!

I teach European nineteenth and twentieth-century history, and would be happy to hear from prospective graduate students interested in working in fields relevant to my own research interests.

My research centers on the cultural history of nineteenth- and early twentieth-century Russia. I am particularly interested in private experience, in belief and its relationship to science, and in amateur musical practice. My work is situated at the intersection of various disciplines, including history, literary criticism, religious studies, musicology, anthropology, and folklore.

In my book Modern Occultism in Late Imperial Russia  (Northern Illinois University Press 2012), I analyze tsarist society by focusing on contemporaries’ enthusiasm for things occult. Although their beliefs seem odd to us today, attempting to understand the reasons for their convictions are highly revealing to the historian. I argue that fin-de-siècle interests in spiritualism, haunted houses, clairvoyance or hypnosis expressed quintessentially modern sentiments, because adepts aimed to reconcile religion with science, exclusive knowledge with popular culture, and individualism with a communally grounded sense of belonging. The wide appeal of the ambiguous topic in national newspapers and popular journals moreover indicates that turn-of-the-century Russian society had become a culture in which a multitude of various voices existed and contradictory opinions could be tolerated. Rather than identifying a society on the verge of violent break-up Modern finds areas of social life and of cultural expression where cooperation was the norm and contradictions could be resolved.

My interest in occultism has also lead me to explore the history of science, in particular the history of hypnosis in late-imperial and early-Soviet Russia. This research has brought into sharp relief the intellectual and cultural continuities that existed across the divide of 1917.

My work on the occult has moreover led me to the historical study of the irrational. I have been intrigued by the conviction of some historical actors that experiences, which transcended the boundaries of rational consciousness, were particularly valuable. In the Russian case, the topic of irrationality is an especially sensitive one because it raises questions about the country’s identity vis-à-vis an allegedly rational West. To pursue these questions, I organized a conference in Moscow in 2011 which brought together historians, sociologists, musicologists, art historians, and literary critics from Britain, Estonia, France, Germany, Russia, and the United States. The peer-reviewed conference proceedings are currently prepared for print and will be published by NLO in Moscow.

Currently, I am working on a project devoted to amateur music making in nineteenth-century provincial Russia. As historians have frequently noted, music was of great significance for nineteenth-century culture. Yet if music plays a significant role in the fullness of human experience, we also need to analyze the less polished musical activities of average people, which in the Russian context have hardly been recognized. This project aims to investigate social interactions, the material culture, and the construction of gender relations as promoted through music in a provincial setting.

"Modern Occultism in Late Imperial Russia" traces the history of occult thought and practice from its origins in private salons to its popularity in turn-of-the-century mass culture. In lucid prose, Julia Mannherz examines the ferocious public debates of the 1870s on higher dimensional mathematics and the workings of seance phenomena, discusses the world of cheap instruction manuals and popular occult journals, and looks at haunted houses, which brought together the rural settings and the urban masses that obsessed over them.

I am happy to hear from prospective graduate students interested in working in fields relevant to my own research interests.