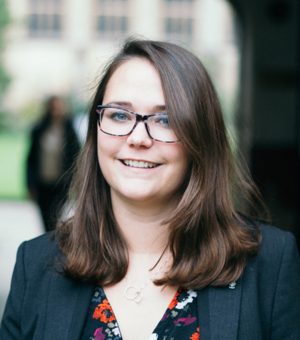 I am an Early Modern historian specialising in the history of ideas in the French Wars of Religion. I read Ancient and Modern History as an undergraduate at Oxford, which has influenced the direction of my research and informed my interest in the reception of classical ideas in the Early Modern era. I did my MPhil and PhD in Cambridge, specialising in political thought and intellectual history, after which I returned to Oxford as a JRF and, subsequently, college lecturer.

My first monograph, Political Thought in the French Wars of Religion (CUP 2021), explores the relationship between the church and the French kingdom in treatises produced in response to the religious and civil crisis of the French wars (1562-1629). It looks particularly at the French Catholic League, and the ways in which members of the League legitimised their resistance to the French monarchy, and the role they played in the assassinations of Henri III and Henri IV.  The impact of these ideas on developing conceptions of sovereignty, church-state relations and political science are a particular focus of the monograph.

My recent work focuses on broad themes and questions in French political thought in the Early Modern period, specifically the development of theories of individual, subjective rights; juridical concepts of power; ideas of voluntary slavery and anti-democracy.

My next research project will take the form of a monograph on Franco-Scottish political thought in the Early Modern period, from the sixteenth to the mid-seventeenth century. Alongside this research, I am also working on the intellectual impact of the French religious wars on the political thought of the seventeenth century, with a particular emphasis on the significance of the work of the jurist Pierre Grégoire (c.1540-1597), whose De Republica (1596/7) made a significant, but as yet largely unacknowledged, contribution to the history of ideas.

Through its close, critical reading of the political treatises and polemical literature produced in France in the sixteenth century, this book offers a valuable new contribution to the intellectual history of the Early Modern era. Sophie Nicholls analyses the political thought of the theologians and jurists in the Holy League as they pursued their crusade against heresy in the French kingdom, during the wars of religion (1562–1629).

I am currently writing a popular history of the French Wars of Religion, forthcoming with Head of Zeus publishing.