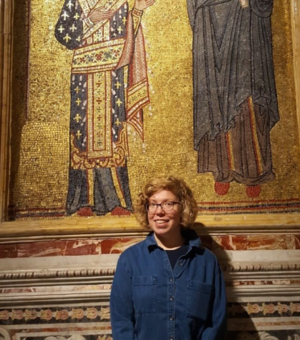 My research concentrates on the twelfth century, and the intellectual, legal, and political developments associated with the rise of scholasticism and the phenomenon known as the ‘Twelfth-Century Renaissance’. The focus of my work is the connection between theory and practice, between the schools and politics. Or, to put it another way, I ask how twelfth- and thirteenth-century thinkers attempted to understand the Bible and drew on scripture to make sense of and reform the social and political structures around them. More recently, I have been working on the connections between Christian and Islamic societies in the medieval period, and intellectual exchange in the Medieval Mediterranean. My current book project examines Norman Sicily, and the transmission, translation, and reception of Arabic traditions of philosophy in medieval Europe.

Between 2016 and 2019, I worked on a research project, sponsored by the British Academy, examining ideas of law, justice, and royal authority in later twelfth-century Sicily. Sicily was a politically and intellectually complex kingdom, home to Muslim, Jewish, Greek Orthodox, and Latin Christian populations. My work concentrates on how the new Norman rulers of the island drew on those different traditions in an attempt to create a royal ideology and coherent legal system, and the extent to which the Sicilian experience of the ‘Twelfth-Century Renaissance’ differed from that of other polities, particularly its near neighbours in Italy. I am currently working on a book which will present my conclusions from this research.

This research speaks to contemporary debates. Norman Sicily, with its different religious and cultural traditions, has often been depicted as an example of the harmonious integration of different cultures and tolerant coexistence – a model ‘kingdom in the sun’. Part of my work examines whether this was truly the case, and how medieval Sicily has been presented (and sometimes appropriated) as a symbol in different political contexts.

Before coming to Sicily, I worked on law and theology in twelfth- and thirteenth-century England. The twelfth century witnessed the creation of the English common law as a systematic, ‘national’ set of rules, but extant legal texts and documents provide relatively little information on the duties, responsibilities and office of the judge during this formative period. My book examines the moral world of those judges. This work was published in 2018 as Justice and Mercy: Moral Theology and the Exercise of Law in Twelfth-Century England, with Manchester University Press.

My work on England argues that judicial roles in this period were shaped by the teachings of pastoral theology, and aimed to challenge the strict separation between the categories of ‘lawyer’ and ‘theologian’ which historians have employed when discussing this period. In this vein, it considers what authors like Gerald of Wales, Robert Grosseteste, Stephen Langton, and Ralph Niger can teach us about the law. Administrators of the law shared a common formation and background, rooted in the scholastic tradition. The intellectual hinterland of the servants of the law is an issue of particular interest to me.

My research often intersects with issues of public perceptions of the past, and the medieval period in particular. As a result, I am enthusiastic about public history and like to consider critically the different ways in which lawyers, politicians, journalists, broadcasters engage with medieval history.

Justice and Mercy: Moral Theology and the Exercise of Law in Twelfth-Century England

Justice and Mercy: Moral Theology and the Exercise of Law in Twelfth-Century England

This book examines one of the most fundamental issues in twelfth-century English politics: justice. It demonstrates that during the foundational period for the common law, the question of judgement and judicial ethics was a topic of heated debate - a common problem with multiple different answers. How to be a judge, and how to judge well, was a concern shared by humble and high, keeping both kings and parish priests awake at night.

Why medievalists should stop talking about Game of Thrones

Why medievalists should stop talking about Game of Thrones

I have made a number of appearances on Voice of Islam Radio, discussing the historical context for the EU referendum and medieval background to the idea of parliamentary sovereignty.

I also contributed to an ‘Academic Archers’ conference in February 2017, (the first attempt at ‘academic’ analysis of the long-running BBC Radio 4 drama). I asked how Ambridge fitted into our ideas about what a medieval village looked like.

I would like to hear from students about any topics in medieval intellectual history c.1000 - c.1350, including theological and political thought, historical writing, philosophy, and the reception and transmission of texts. The Medieval Mediterranean between c.1000 and c.1350. Legal history - medieval common, canon, and roman law traditions