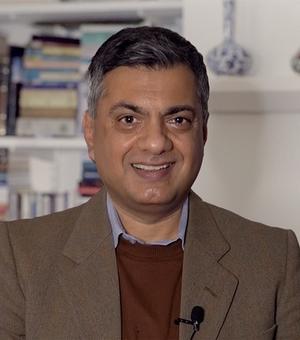 I completed my PhD in Intellectual History at the University of Chicago in 1994. I was then elected Junior Fellow at the Harvard Society of Fellows, after which I went on to run the graduate program at the Institute of Ismaili Studies in London, which included schools in Tajikistan and Iran.  Returning to regular academic life in 2003, I taught for two years at Yale as a visiting lecturer and another four at The New School for Social Research in New York as Associate Professor, arriving in Oxford as Reader in Modern South Asian History in 2009.

I am interested in the intellectual history and political thought of modern South Asia as well as in the emergence of Islam as a global category. In my research I have focussed on the cultural and philosophical meanings of violence as much as the emergence of non-violence as a political project. I am also very interested in the different ways in which the idea of humanity achieves political realty, particularly as the simultaneous subject and object of globalisation. My recent work deals with efforts to think beyond the nation-state and the inheritance of anarchism in the post-colonial world.

Pakistan, founded less than a decade after a homeland for India’s Muslims was proposed, is both the embodiment of national ambitions fulfilled and, in the eyes of many observers, a failed state. Muslim Zion cuts to the core of the geopolitical paradoxes entangling Pakistan to argue that India’s rival has never been a nation-state in the conventional sense.

The Impossible Indian: Gandhi and the Temptation of Violence (Harvard, 2012)

The Impossible Indian: Gandhi and the Temptation of Violence (Harvard, 2012)

The Impossible Indian offers a rare, fresh view of Gandhi as a hard-hitting political thinker willing to countenance the greatest violence in pursuit of a global vision that went far beyond a nationalist agenda. Revising the conventional view of the Mahatma as an isolated Indian moralist detached from the mainstream of twentieth-century politics, Faisal Devji offers a provocative new genealogy of Gandhian thought, one that is not rooted in a clichéd alternative history of spiritual India but arises from a tradition of conquest and violence in the battlefields of 1857.

From Xinjiang to Germany: how did Islamophobia become a global phenomenon?

From Xinjiang to Germany: how did Islamophobia become a global phenomenon?

How Caste Underpins the Blasphemy Crisis in Pakistan

How Caste Underpins the Blasphemy Crisis in Pakistan

Jamal Khashoggi and the Competing Versions of Islam

Jamal Khashoggi and the Competing Versions of Islam

Will Saudi Arabia Cease to be the Center of Islam?

Will Saudi Arabia Cease to be the Center of Islam?

Conversions from Islam in Europe and Beyond

Conversions from Islam in Europe and Beyond

The Poetry of Al Qaida and the Taliban

The Poetry of Al Qaida and the Taliban

I would like to hear from potential DPhil students regarding: Intellectual history, political thought, South Asia, Hinduism, Islam.