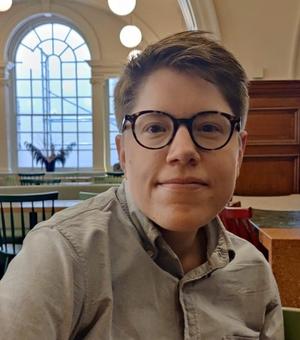 I am a historian of gender and sexuality in nineteenth- and twentieth-century Britain, with interests in the gender order, education, elites and elite institutions, queer identities and communities, and intellectual history. I received my PhD in History from Columbia University in 2020.

My research focuses predominantly on how, in the period c. 1850–1939, British educational institutions were sites for the production of new ideas about gender and sexuality. I am currently completing my first book manuscript, Teaching Gender: Higher Education Reform and Heteronormativity in Britain, 1860–1939. It offers a new explanation for how British higher education became coeducational from the late nineteenth century, and argues that coeducational universities played an important role in making the hetero/homo binary foundational to middle-class life and sociability in the twentieth century. Drawing on extensive research in the archives of ten colleges and universities across England and Scotland, I show that the nationalization and centralization of higher education at the turn of the twentieth century resulted incidentally in coeducation, over the protest of feminist activists who supported gender segregation; that students’ negotiation of cross-gender interaction in coeducational universities ultimately led them to identify heterosexuality as a seemingly less fraught paradigm than more gender-neutral conceptions of “corporate life”; and that single-sex men’s and women’s colleges, though increasingly marginal, became important sites for the theorization of life paths and identities outside the heterosexual norm. Through detailed recovery both of political and financial decision-making and of the experiences and emotions of faculty, students, administrators, donors, and national politicians, I paint a vivid and resonant picture of the university campus as a key site for the transmission of norms around gender and sexuality.

My second project is an intellectual history of male homosexuality in England, c. 1850–1967. It traces a distinctively elite English thread of theorizing about male homosexual identity through the manuscript writing of teachers, scholars, and writers such as William Johnson Cory, John Addington Symonds, E P Warren, G L Dickinson, and E M Forster. In particular, I examine the roles that elite educational institutions, the Greek and Latin classics, and antidemocratic political thought played in the emergence of conceptions of male homosexual identity and community in England. In tracing the social and institutional contexts in which my thinkers operated and the reception of their ideas, I suggest that they have had lasting effects on how male homosexuality has been conceptualized in England, even after the decriminalization of sex between men and the advent of gay liberation politics. Other research interests include the rise and fall of the hetero/homo binary in the twentieth-century Atlantic world; the intellectual history of late-twentieth-century lesbian and gay studies; queerness and classical reception; and the history of English elite single-sex education from early modernity to the present.