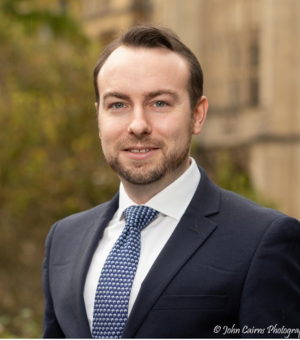 I am a historian of eighteenth-century Britain and its empire, with particular interests in political, legal, and constitutional history. I received my BA and MA from the University of Ottawa in Canada and my PhD from the University of Cambridge. My MA thesis examined the influence of imperial crises in North America and India upon British party politics and political ideology in the 1760s and 1770s. My doctoral research analysed the reciprocal political and constitutional relationship between the East India Company and the British State in the formative early decades of British territorial dominion in Bengal. I am currently working on revising my dissertation into a monograph and drawing the many strands of British and imperial politics together into a political biography of Charles Jenkinson, 1st Earl of Liverpool (1729-1808).

My research interests are broadly in British politics, law, and empire in the ‘long’ eighteenth century (ca. 1688-1832). My master’s and doctoral research focused on the intersections and interactions between domestic and imperial politics in the later eighteenth century. My doctoral work examined the East India Company’s transformation between the 1760s and the 1780s from a private enterprise into what was virtually a department of the British State. It argues that metropolitan political and constitutional concerns, as well as a robust public debate concerning the nature of the East India Company’s territories on the Indian subcontinent, were responsible for the development of the unique relationship between the British State and the East India Company that laid the foundations of the British Empire in India.

I have also written on other diverse aspects of the British Empire, including on the publication of the first printed newspaper in India, Hicky’s Bengal Gazette, and the persecution by the East India Company authorities in Bengal of its proprietor, James Augustus Hicky. This work seeks to place the opposition rhetoric of early colonial Calcutta, recorded on the pages of Hicky’s Bengal Gazette, in the wider global context of opposition to the nature of British rule in America and Ireland in the late 1770s and early 1780s. My work on Canadian Confederation in 1867 highlighted the intra-imperial politics that not only fostered the union of the British North American provinces but also helped to shape its constitution, an aspect that has potentially significant implications for contemporary interpretations of the Canadian constitution. My current work seeks to build upon these themes of interaction between different imperial theatres as they coalesced in Britain, through studies of the involvement of several key individuals, including Charles Jenkinson and Edward, 1st Baron Thurlow.

Canada’s Constitutional Legacy: ‘Notwithstanding’ its framers?

Canada’s Constitutional Legacy: ‘Notwithstanding’ its framers?