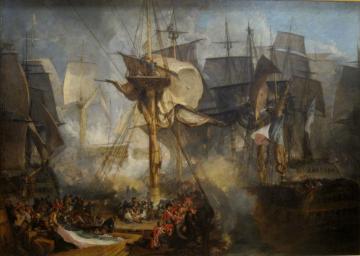 European political geography is the product of violent competition which has left the continent divided into distinct states, unlike China or (to a lesser extent) North America. This process is often described as a Darwinian struggle for survival, with only the ‘fittest’ states achieving full sovereignty. Leopold von Ranke, one of the founders of modern historical method, argued that ‘primacy of foreign policy’ dictated how each state developed internally. Each state strove for autarky, modifying its own institutions, economy and society so as to compete more aggressively and efficiently with its neighbours.

More recently, John Brewer coined the term ‘Fiscal-Military State’ to describe the institutionalisation of permanent taxation and armed forces during the seventeenth and eighteenth century. His study is part of a wider debate on whether authoritarian or constitutional states are more efficient at mobilising resources for warfare. This research has greatly extended our understanding of the interrelationship between political institutions, economies and societies, but it has largely overlooked the fact that virtually no European state has waged war without external assistance.

This is the paradox of European history. Competition was only possible through cooperation with allies, neutrals and even enemies, since states have rarely obtained all they needed for warfare from their own populations, while governments have generally been unable to prevent their own subjects from aiding other powers. The ‘success’ of each state has depended not only on its ability to assert itself militarily, but also on being recognised as a ‘state’ by its neighbours. The emergence of diplomatic conventions and international law is only one aspect of this process. Europe contained a host of semi-sovereign entities, like the German and Italian principalities and city-states, who not only struggled to preserve or enhance their autonomy, but also provided war-making resources to other, larger states.

These exchanges have been studied primarily from the perspective of diplomacy which only identifies formal alliances and arrangements between states. In fact, the connections were far more complex, as they encompassed numerous non-state actors like merchants, entrepreneurs, bankers, experts, and agents of all kinds. The resources being transferred ranged from armaments to fully equipped and manned warships, from individual recruits to entire armies, from barrels of cash to sophisticated financial transfers and credit. Additionally, numerous services were provided, such as transportation for men and materials, the right to cross neutral territory or use specialist facilities like ports, as well as the exchange of intelligence and specialist know-how.

These transfers were handled by intermediaries often based in cities which were not necessarily political capitals, but which functioned as ‘hubs’, or nodal points in a complex ‘fiscal-

military system’ emerging during the 1560s and maturing around 1700 when all the essential features were in place. These included recognised ways of interacting, such as specific forms of military conventions, recruitment contracts, and financial exchanges all of which were as much part of Europe’s political development as diplomatic protocol or court rituals. This system allowed governments to access vital additional resources, and greatly contributed to the growing scale and intensity of warfare across this period.

The French Revolutionary and Napoleonic Wars saw both the peak of the system and the onset of its demise. The revolutionary ideology of the citizen-in-arms, as well as the Revolution’s assault on social and geographical privileges greatly expanded the state’s war-making potential by removing many of the legal barriers to the mobilisation of human and material resources. Simultaneously, the greater reach of the state was legitimated by heightened nationalist ideology (sovereignty of the nation) which expanded the state’s power to command ‘national’ resources, whilst discouraging reliance on ‘foreigners’. The nationalisation of war-making resources encouraged efforts to prevent their ‘export’ to potential enemies by curbing extra-territorial violence through bans on privateering or enlisting in foreign armies. Cooperation continued amidst the competition as states agreed collectively to remove or nationalise the non-state actors, for instance through a more coherent articulation of neutrality after.

Meanwhile, the wars between 1792 and 1866 eliminated most of Europe’s smaller states, as well as the remaining areas of fuzzy sovereignty such as the German Confederation. The surviving larger states emerged better equipped to wage war independently of outsiders. Industrialisation assisted this, partly by boosting domestic arms manufacture (though few states achieved self-sufficiency), but mainly by easing recruiting problems by replacing manual labour with machine production. European imperialism simultaneously opened access to additional military manpower. The recruitment of indigenous soldiers reduced (relatively speaking) the numbers of Europeans required to expand and defend empires, whilst also increasing overall numbers that could be deployed globally.

However, the risks of conflict were increased, because the presence of nationalism combined with the removal of minor states made it harder to make peace through the traditional means of minor territorial adjustments. Meanwhile, the nationalisation of warfare meant that when conflicts broke out, their impact on each belligerent was even greater than before leading to what has become known as the age of ‘total war’ (1914-45).

Most professional military education and contemporary strategic planning draws heavily on the experience of the earlier twentieth century in its attempts to prepare for present and future conflicts. European states remain formally configured as autarkic war-makers, each with a full range of conventional land, sea and air forces. Yet it is clear that self-sufficiency is impossible: none can actually fight alone. Even relatively ‘minor’ operations, such as the intervention in Libya in 2011, can only be conducted as part of wider alliances. Today’s European states are dependent on hardware, technology and intelligence, (amongst other things) procured from beyond their borders. Meanwhile, social and cultural changes have eroded the legitimacy of nationalised war-making. European and other western societies are no longer willing to accept the idea of national sacrifice. Mass mobilisation and mass death are unacceptable, at least within the context of the formal public sphere. This has created spaces filled by new non-state actors like Blackwater and other commercial military contractors.  Human casualties and other costs are pushed out of the ‘national’ public sphere and onto the private sector

The wider context has certainly changed. Today’s enemies are different, just as society, economy and politics have also changed. Whereas the pre-modern context was European, the postmodern context is global. Nonetheless, Europe’s pre-modernity has perhaps more to teach us about today’s challenges than the more recent era of nationalised war-making and total war.

Professor of the History of War

Chichele Professor of the History of War
All Souls College