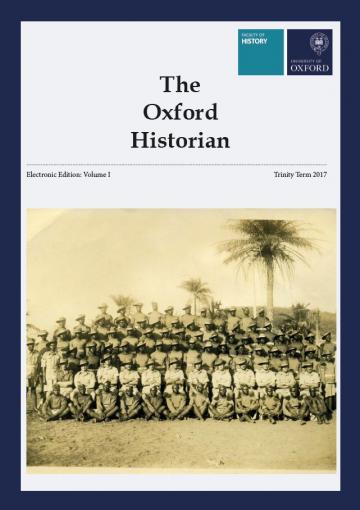 Thanks to a generous donation from the Dacre Trust, we will be printing 600 copies of the magazine - made up of the three electronic magazines released throughout the year. These will be free and can be ordered through in the feedback box below. Please fill in your name, address, college and matriculation year and the Faculty will get your copy sent over to you.

If you are having difficulty with the form above, please email your information straight to comms@history.ox.ac.uk. Please accept our apologies for any inconvenience.

Why does History change? This rather basic question seems to have been floating around the History Faculty throughout the current academic year. Press coverage – much of it not entirely accurate – of the changes that the Faculty is making to its curriculum has encouraged a sense that the classical beauty of the Oxford History syllabus is being dismantled, or radically reshaped, to make way for a new functional structure, oriented much more towards the concerns of the present day than the scholarship of the past. The reality is of course distinctly more modest. The three principal changes that the Faculty decided upon in 2015, and which will come into effect for the undergraduates beginning their History degree in the autumn of 2017, are to require students to choose one out of their eleven papers in Prelims and Finals from among a range of options in non-British and non-European History, to replace one of our third-year three-hour exams (in British History) with a take-away examination which will be done in ten days at the end of the Trinity Term of the second year, and to offer a range of Theme papers (comparing a theme across geographical and chronological boundaries) which students can choose, if they wish, to replace one of their Outline papers in Finals.

None of that quite amounts to the abandonment of our great strengths; nor does it constitute a dumbing down of the challenges presented by the degree. Indeed, the gradual diversification of assessment during the last fifteen years away from an exclusive reliance on timed examinations to a compulsory thesis, an extended essay based on the Special Subject, and now the take-away examination is precisely an attempt to get away from one method of assessment – timed examinations – which, though it might be stressful also has a certain sameness. However, what has been most interesting about the press coverage of these changes has been the assumption that Oxford History has hitherto remained largely the same over the previous half-century or so. Nothing of course could be further from the truth. To change while appearing to remain the same might be one of the quiet virtues of the History Faculty; but, as Julia Smith’s article in this issue makes clear, change has in fact been a constant feature of Oxford History. Cliff Davies, who sadly died last autumn, and who was a History tutor at Wadham for almost forty years from 1963, used to enjoy telling the story of his campaigns as a newly-appointed member of the Faculty to bring more social and economic history onto the curriculum. He ran into predictable opposition from some more senior figures who declared it would undermine the strengths of the History syllabus, until a little quiet digging in the Oxford Magazine revealed an article written by one of his more intransigent opponents some twenty years earlier advocating largely the same changes as he was seeking to introduce. Cliff won the day, eventually, as he generally did. But the changes he introduced form part of a larger fabric of changes of options, of course structures, and of assessment, which has taken place continuously over the last half century.

Some of these changes are external: the world changes, and the historical interests of students change. There is no particular mystery as to why Civil Rights in the USA, China since 1900, and The Making of the Modern Middle East are currently among the most highly demanded undergraduate courses. But other changes are more surprising. The new Global History outline paper on Eurasian Empires 1450-1800 has been a remarkable success, introducing students to the history of the Ottomans, Mughals, the Chinese empire and the Spanish and Portuguese empires in the New World. Conversely, it can be difficult to explain why some other areas go out of fashion in terms of student choice. The political history of nineteenth-century Britain, and the history of Eighteenth-Century Europe have both been losers in recent years, for reasons which owe little to the inherent interest of the subject matter.

But historians are reluctant to be dictated to by market forces, in teaching as in research. Rather than seeking to construct a syllabus that tracks perceived student fashion, we have been concerned to adapt the syllabus to respond to broader changes in the discipline of History. As the articles in this special issue do, I think, demonstrate, the practice of History in Oxford as elsewhere continues to evolve. There is more interest in cultural-history topics, as well as in related subjects, such as material and visual culture. There is more being done on experience, and on the worlds of identities and emotions. And there is a preoccupation with interconnectedness in its many forms: relating histories that geographically and intellectually have been kept for too long in separate compartments. This is what much of the current preoccupation with Global History is about, not about leaving behind the familiar, but about building connections and new frames of meaning. It offers exciting perspectives, but the lesson of Oxford’s continually evolving curriculum is that it will not remain unchanged for long.