The Other Special Relationship

The middle of the twentieth century witnessed far-reaching race protest movements in the United States and the United Kingdom. This project focused on the hitherto unexplored transatlantic links which connected those movements, and shaped their course and outcome.

Today, we think of the Anglo-American nexus in terms of neoliberal policies, Empire, and Cold War alliances. Too often, efforts to compare and connect movements for social change in Britain and the U.S.A. become an exercise in proving or dispelling claims of American exceptionalism.

While these issues are certainly relevant to any discussion of Anglo-American connections, we are interested in movements for social justice, national liberation, human rights, and various “counter” movements that crossed the Atlantic—either through ideas, people (immigrants and activists), and organizations.

A workshop was held at the Rothermere American Institute in June 2011 in conjunction with the Institute of Race Relations. Some public sessions included participation by former activists. Conveners: Dr. Stephen Tuck and Prof. Robin Kelley (Harmsworth Professor 2009-10). The project was funded by a generous grant from the Princeton-Oxford research fund. 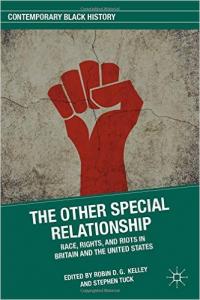