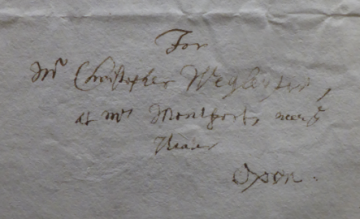 Whenever I work in the Bodleian’s Weston Library, I wonder at the lives of the site’s early modern inhabitants — who they were, what their houses were like, and their relationships to each other. One aspect of my work with a union catalogue of early modern correspondence involves drawing together details of individuals connected through letters.[1] In the database’s earliest days, digital records for approximately 45,000 manuscript letters in the Library’s collections were created from an analogue card catalogue and while many of the early modern people tucked within these letters are well known, others have left little trace.[2] These unsubstantial figures were not scholars, movers, shakers, or those of means; often, they survive as no more than a name and a date taken from a letter. If we are lucky there may be a description such as ‘vintner’ or ‘mercer’ attached. Yet sometimes it is possible to uncover multiple snippets, and just occasionally threads combine and individuals coalesce to help reconnect the circles of which they once formed a part. I keep a select list of lesser-known people and, in my spare time, attempt to track them down. It is a slow process. Many remain on this list for years. 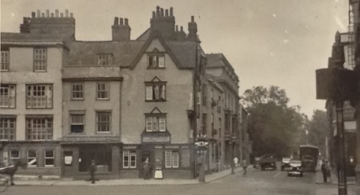 One woman whose trail I have been following lived on the site of the Weston Library. Dr Philip Beeley stumbled across her initially in a letter from John Wallis, Oxford’s Savilian professor of geometry.[3] Writing to the secretary of the Royal Society, Henry Oldenburg, Wallis recounts details of the death of a visiting Danish scholar, Martin Rosenstand, in ‘a House of office’ where he had ‘as by many circumstances attending it seemed highly probable, in his sleep, or dream, hanged himself’.[4] Predictably, the inveterate chronicler of early modern Oxford, Anthony Wood, provides a significantly more lurid account. On 2 February 1673/4, this ‘sojourner in Mrs. Mary Mumford’s house Oxon, neare the Theater, hanged himself … He rose up about four, struck fier, put of his shirt, went downe naked (with his cote, loynings, hose and shoes in his armes) and so with the candle in his hand to a privy house, where (though I my self can just stand up in it) hanged himself in his cravet, which came about his neck twice, upon a little rafter that went cross the house.’[5] Suicide was then a crime, and Martin’s distraught younger brother, Peter, retrieved the body, ‘covered his privities with his coat, strived to conceale his death viz. reporting that he died at his business.’ The University coroner, Mr Hopkins, and Wallis both considered the possibility that this young man hanged himself ‘in his sleep, or dream’, enabling him thereby to receive burial in the churchyard of St Mary Magdalen.[6] Given the combination of a suicide, a toilet, and a ‘victuallying or boarding house’ for ‘outlanders’, how could I resist putting Mrs Mumford onto my list, especially as Wood recorded elsewhere that she had witnessed the deaths of two further Danish lodgers on her property just three years earlier?[7] Wood tells us that Mrs Mumford herself died on 9 January 1688/9.[8] Beyond this, little was known. 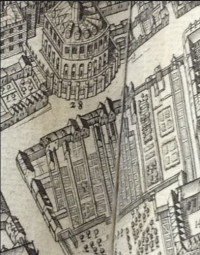 In this detail from David Loggan’s bird’s-eye view of Oxford in Oxonia illustrata (Oxford: e Theatro Sheldoniano, 1675), it is possible to make out the houses and gardens at the north-east end of Canditch (now called Broad Street).

In the second half of the seventeenth century, the north-east corner of Broad Street was a right-angle of tenements and, in the course of my investigation, I returned to the photographs of one of the Bodleian card cataloguers, J. H. H. Minn, who had created a record of the houses just before they were demolished in 1936–7 to make way for the new Library.[9] But beyond a suggestion that Mrs Mumford once occupied the house which became the home of physician Henry Acland (1815–1900),[10] and the records of a number of Mrs Mumford’s tax receipts, including payment in 1665 for eight hearths, little emerged until I located her Will.[11]

Mrs Mumford’s life provides a glimpse into seventeenth-century social mobility and change in Oxford. Born Mary Couch, her father John and mother Alice moved to the city from Ilton, Somerset, shortly after the foundation of Wadham College.[12] Ilton was the closest village to the Merryfield estate of Nicholas (d. 1609) and Dorothy (d. 1618) Wadham, the founders of College, and John Couch is mentioned in the Wills of both his employers; he died in 1628, describing himself in his own Will as ‘head Cooke of Wadham Colledge’. Mary had a brother, who is entered as a commoner in the register of Wadham, matriculating in 1626 at the age of 16, while she herself was the eldest of four daughters. She married an Oxford tailor, Robert Coke, who died in 1646, leaving leases on land near Witney at Yelford and Hardwick. By the time of Mary’s own death in January 1688/9, just one of their children, Anne, was alive, but she had acquired three step-children —Edward, Elizabeth, and Rebeccha Mountfort (this is an example of just one of the problems we face with the spelling of names in the period) — and her grandson Robert was a student at Wadham.[13] Mrs Mumford (a.k.a. Mountfort) solidified her holdings in Canditch (the former name of Broad Street) with the purchase of ‘Two Messuages and Tenements’ in 1651, a 40-year lease on a piece of ground in 1656, and the building of an additional New Tenement on land purchased.[14] Remarkably, the first item she bequeathed in her Will was none other than ‘the piece of ground lyeing on the farr end of the Garden … now Wal’d in and the house of Office now used and enjoyed with the said Messuage or Tenement wherein I now dwell’.[15]

Mrs Mumford remains on ‘my list’ for a rainy weekend. Details of various visiting scholars who lodged with her are beginning to surface and the bequests in her Will indicate she lived at the extreme north-east end of the street, sharing a garden and house of office with her other properties in what is now Parks Road. I would like to reunite her with her tenements, her garden, and her latrine, as well as enter information about her into the new database currently in development for EMLO that will be tailored to the collation of scraps of information on hitherto little-known people. In the meantime, when in the Weston, I shall continue to ponder the life of this widow who ran her boarding house at a time of change. From humble beginnings, she witnessed a brother and a grandson study at the university, friends[16] and relations[17] assume positions of note, and through her windows she watched the Sheldonian Theatre take shape, and the building that is now the History of Science museum rise to accommodate Elias Ashmole’s foundation collections.

[1] Early Modern Letters Online [EMLO: http://emlo.bodleian.ox.ac.uk/home] is the database created by the research project, Cultures of Knowledge, based in the Faculty of History and funded by the Andrew W. Mellon Foundation: http://www.culturesofknowledge.org/.

[4] ‘House of Office’ was a term used in the period for a latrine. Samuel Pepys references a house of office on a number of occasions, recording that he has vomited into the one belonging to the Earl of Sandwich, and that his own is emptied and cleaned at night; he has the misfortune also to step in the contents of his neighbour’s house of office when this overflowed into his home.

[6] Martin Rosenstand was buried ‘the next day following at night about 10 or eleven priatly (no body present but the carriers and clerk of the parish) … close under the wall next to the stile or passage opposite to the Katherine Wheele gate: aet. 21 or 22.’ Wood, Life and Times, vol. 2, p. 280.

[8] Her burial is listed in the parish register: ‘Ms Mary Mumford widow was buryed Jan 19th 1688[/9]’. In Sir John Peshall’s edition of Wood, published in 1773 with his own additions, it is noted that she was buried under the floor in the Inner Chapel of St Mary Magdalen. Unfortunately this floor is covered now with a fine wood herringbone.

[9] When I began looking into the origins of the Bodleian card catalogue, no one to seemed to remember why it had been compiled, or by whom, but a foray into the Library archives revealed it to be the handiwork of three individuals, the middle of whom was James Henry Hall Minn (1870–1961), an amateur photographer with a particular interest in topography and architecture. See M. Lewis, Ghosts in the Machine: (Re)Constructing the Bodleian’s Index of Literary Correspondence, 1927-1963, on the Cultures of Knowledge blog: http://www.culturesofknowledge.org/?p=295, 26 April 2013. The houses at the north-east end of Broad Street were demolished between December 1936 and March 1937.

[12] Wadham College was founded in 1610. For further details see the College website: https://www.wadham.ox.ac.uk/about-wadham/history-and-archives.

[14] By the seventeenth century, the word messuage was used for ‘a dwelling house together with its outbuildings and the adjacent land assigned to its use.’ [OED]

[15] This was left to Mrs Mumford’s son-in-law, William Stamper, milliner of London, the husband of Anne. He describes himself as a ‘painter stayner’ in his Will (dated 9 January 1690).

[17] Mary Mumford’s brother-in-law William Cornish served as Mayor to the city of Oxford in 1672–3.