Mobilizing the Movement? World War II and the struggle for black equality

The project investigates the relationship between two of the seminal moments in modern American history: World War II and the Civil Rights Movement.

Directed by Dr. Stephen Tuck (Oxford) and Dr. Kevin Kruse (Princeton), the project was based on the contention that the war did not suddenly arouse black Americans to protest. Rather, it changed the balance of power between racial groups that had long been competing for power. In part, this was because black Americans took advantage of the crisis in a variety of ways. Just as important, though, the foundation of white supremacy was severely undermined. Furthermore, World War II changed the nature of the state, the economy, Congress, regional demographics, gender and class relations, the law, theological and popular ideas about race and the international context of race relations. All of these developments, in complex and sometimes conflicting ways, decisively altered the relationship between those fighting for racial equality and those determined to maintain racial repression.

A grant of £20,000 from the Oxford-Princeton research fund provided the core financing for the project, leading to a publication of a volume of essays by Oxford University Press in 2011. 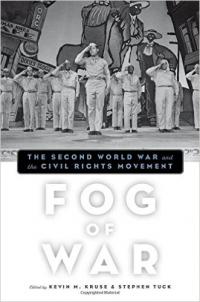