Through my research on Catalan and Mallorcan traders in the medieval Mediterranean, I seek to explore the ways in which identity, trust, and community both in the past, and now, shape human lives. I ask what it means to be a part of a group, what it means to make agreements with others, and how interactions with others change the ways we understand our own identity. The medieval world, far from the parochial backwater it is often seen to be, was filled with movement and connections. Traders from Barcelona corresponded with people and exchanged objects from England to the Middle East to China. These interactions involved cooperation between different communities, different languages, and different cultural understandings of the world.

Studies of medieval communities can engage with a wide range of historical sources, from written texts to objects discovered through archaeological excavation. Often, it seems to me, one of the best ways to answer questions we have about the past is to use a wide variety of material and to bring different kinds of sources together in order to provide varied perspectives on the same theme.

One of the ways that I have sought to explore these connections is by engaging with network science. This is a kind of analysis that developed in mathematics and computer science focusing on the representation and exploration of relationships and connections. Use of network analysis in the humanities typically focuses on relationships between humans, for example tracing correspondence in letters. Exploring this method of analysis and considering the ways in which varied historical source materials can be utilised, has allowed me to better understand the ways in which medieval Mediterranean trade took place. Also to explore how different economic communities might have functioned, and challenge some of our assumptions related to medieval maritime movement.

The main source type I am using in my current DPhil research is economic contracts between traders and investors in Barcelona and Mallorca. In these surprisingly short agreements, men and women invested goods and money in trading ventures which went across the Mediterranean Sea, with little guarantee of either profits or a safe return. Written by professional notaries, these documents record the names of the traders and investors, but also the names of witnesses to the agreement. I have been quantifying these documents and begun to explore the ways in which network analysis can help me to better understand how economic communities in Barcelona might have been structured. We know that there were a few powerful merchant families, for example, who invested heavily in overseas trade. Network 1 is a representation of the data collected so far, showing relationships between any named people in the contracts (apart from the notaries themselves). While there is a long way to go and much more data to be collected, there are a couple of exciting initial findings from the network. Firstly, that the actors in the network are mainly connected. This suggest a trading community that was not defined by small family loyalties but instead by inter-group cooperation. Secondly, that Maria de Medalia, the matriarch of a prominent merchant family, appears as one of the most important investors in the network. Women are not frequently understood to play a prominent role in medieval maritime trade. Further exploration of the role of Maria de Medalia, as well as other powerful Barcelonan women, might prove that we need to rethink how these economic communities really functioned. 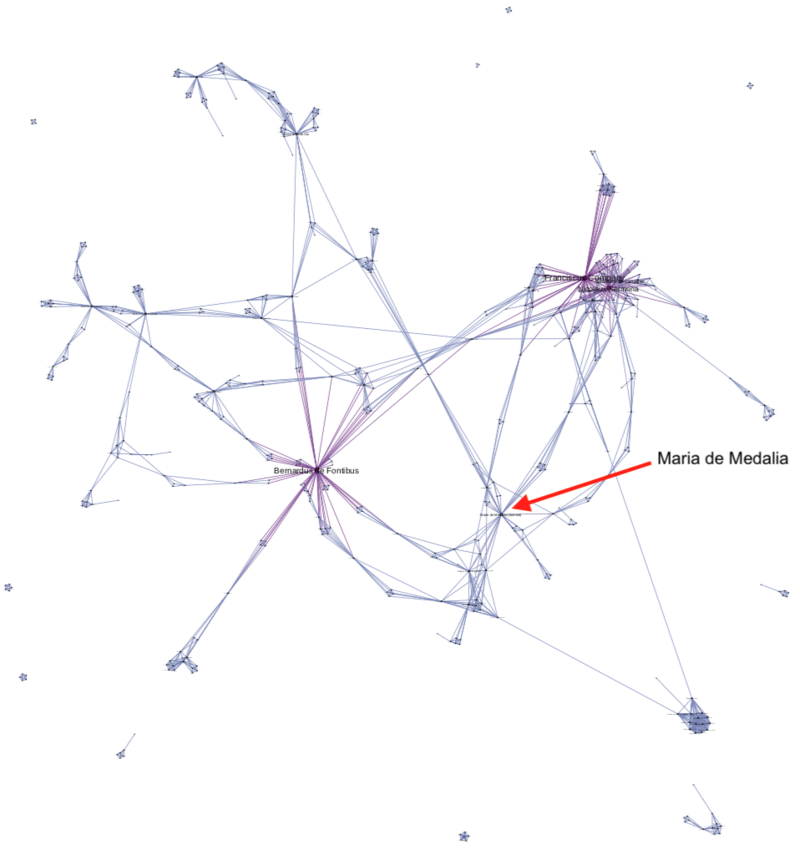 We also need to consider where these traders were going. By using data from 3 major archaeological excavations of Acre (Israel), Tripoli (Lebanon), and Alexandria (Egypt), we can begin to understand the importance of the settlements surrounding the Mediterranean coast. Network 2 is constructed from relationships of the coappearance and production centres of ceramic types in the three excavation sites. As we expect when analysing data drawn from three major centres, Acre, Alexandria, and Tripoli loom large in the network. However, what it also shows is that there are a variety of other important settlements which form part of this trading world. Overall, it supports our current understanding of the most important trading settlements around the Mediterranean but also suggests that some of the minor settlements could be more fully excavated. 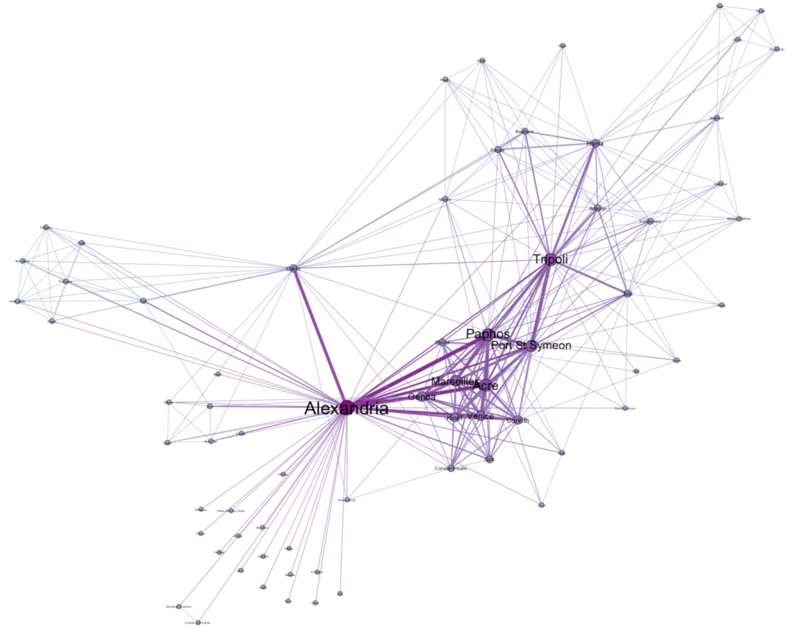 Finally, we need to think about how people actually travelled across the vast Mediterranean Sea. An exploration of literary sources can help us here. Network 3 has been created by quantifying the routes recorded in the Travels of Ibn Battuta, the Travels of Ibn Jubayr, and the Itinerary of Benjamin of Tudela. I also included the route illustrated by Matthew Paris in his Itinerary of an imagined pilgrimage to the Holy Land. Individually, the relationships in these sources show a very straight-forward route from individual city to individual city. However, together they can give us a more complex idea of some of the ways in which settlements were connected in the medieval Mediterranean. While we often illustrate connections between ports with straight and simple lines, the network suggests that, in reality, shorter routes with smaller stops were prominent in movement across the maritime space. Perhaps we should reconsider the ways in which we conceive of maritime travel and reorient our focus to include what are currently considered minor settlements? 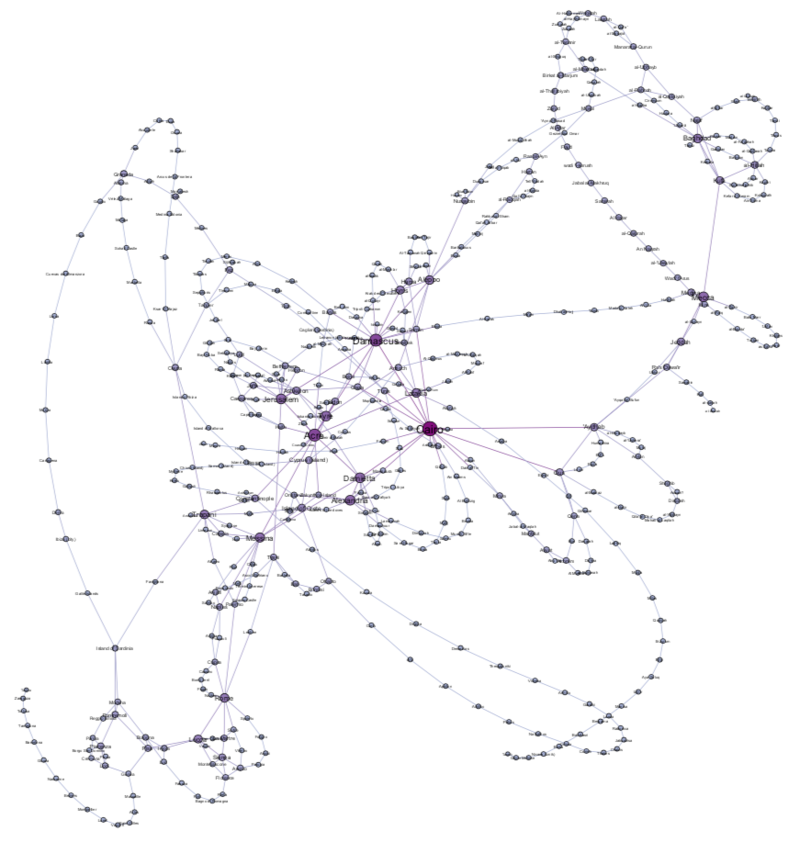 Network 3: a network created from the connections recorded in the Travels and Itinerary of Ibn Battuta, Ibn Jubayr, Benjamin of Tudela and Matthew Paris. Node size, colour, and node label size are defined by weighted degree.

I hope that this brief exploration has demonstrated some of the possibilities that come from engaging with a wide range of historical sources, from functional contracts to literary records and excavated objects. Network science is also a fruitful approach for studying both the present and the past. Increasing interdisciplinarity will lead, I hope, to more conversation between the sciences and humanities generating further approaches, more questions, and to new understandings of the past.

This method is more fully explored (and the last two networks explained in detail and analysed) in:

Hancock, Annabel, ‘Tracing Connections: Using Network Analysis to Study Trade and Movement in the Mediterranean in the Eleventh to Fourteenth Centuries’, MA thesis, Centre for Medieval Studies, University of York, 2019.

Balard, Michel. “Coastal Shipping and Navigation in the Mediterranean.” In The Eastern Mediterranean Frontier of Latin Christendom, edited by Jane Stuckey, 1-16. Farnham: Ashgate, 2014.

Barabási, Albert-László. Linked: How Everything Is Connected to Everything Else and What It Means for Business, Science, and Everyday Life. London: Penguin, 2003.

Ben-Tor, A., M. Avissar, and Y. Portugali. Yoqne’am I: the Late Periods. Qedem Reports 3. Jerusalem: The Hebrew University of Jerusalem, 1996.