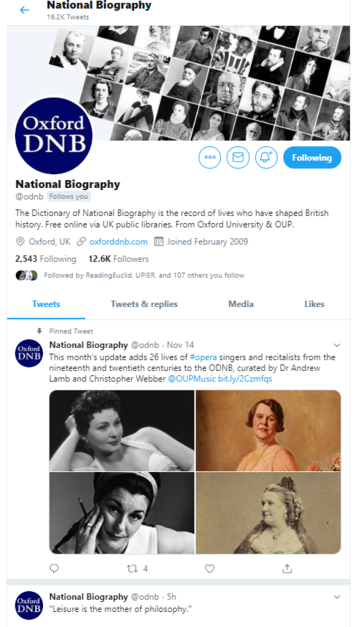 It is said that when John Maynard Keynes met someone new, he would ask himself whether that person would make it into the Dictionary of National Biography. Having spent the last twenty-one years editing the lives of the recently-deceased for the Oxford Dictionary of National Biography, I have to confess to looking at the living (and certainly the recently-deceased) with something of the same attitude.

Not that it is up to me who goes into the dictionary and who doesn't. Inclusions (and exclusions) are the result of an extensive and rigorous process involving a large network of advisers and several rounds of sifting: subjective still, no doubt, but based on a huge amount of accumulated knowledge and expertise.

We start with long lists of potential candidates for each year of death, usually around 1000 to 1200. Most people who get an obituary in one of the broadsheets are included, though some can safely be left out. But the broadsheet obituaries have by no means been immune to the cult of celebrity: actors and actresses will get obituaries on the basis of very minor notability, whereas scientists and academics face a much higher hurdle (though historians still do remarkably well). The broadsheets therefore have to be supplemented by specialist journals and publications, both in print and online. We also get a very large number of suggestions from readers of the dictionary.

The next stage is to take advice. Potential candidates are divided into around forty occupational categories, ranging from architects to zoologists, though often they appear in more than one list. These shorter lists are sent to around 500 advisers: half a dozen for some of the smaller areas, but as many as twenty-five or thirty for the larger areas such as art, business, medicine, or sport. The advisers – a combination of leading practitioners and academic experts – are then asked to grade the subjects, from A ('must go in') to E ('no chance'), justify their grades, and where possible suggest contributors for those who should go in. In grading, the key criterion is impact on national life, whether for good or bad.

The advice is then collated and cross-checked: a fairly easy task for areas such as mathematics or astronomy, but a much harder one for art or literature. Sometimes further advice is needed. The totality of the advice is then used to whittle down the candidates to the 225 or so subjects who are included each year.

Once our general editor, Sir David Cannadine, has settled on the final list and word lengths have been assigned (most Oxford DNB entries are in the region of 800 to 1500 words, but some need many more), we proceed to commissioning. The ideal contributor is usually someone who knew the subject and understands the area in which he or she worked, but is objective enough to highlight weaknesses as well as strengths, flaws as well as virtues. Well over 90% of first-choice contributors say 'yes', often with an enthusiasm that reflects their appreciation of the dictionary as an important record of national life, and one that is available online to a wide readership through public libraries.

To help in writing the entries, the dictionary provides a mass of materials: copies of obituaries; interviews or profiles or academic articles; entries in Who's Who and other reference works; and copies of the birth, marriage, and death certificates. These latter are crucial: it is constantly surprising how often false information about dates of birth or number and dates of marriage finds its way into the obituaries or Who's Who. Contributors are also encouraged, in most instances, to contact a subject's former colleagues or family, though this input can sometimes be a double-edged benefit.

Oxford DNB entries follow a fairly standard format: birth, parentage, education, career, personal life and interests, death, legacy. There are a number of 'standard factual components' which each entry must include. But within this framework there is enormous scope for the author's own voice and judgements. The really important parts of an entry are to do with context, significance, personality, and impact.

Once written, the entries are checked and edited by the dictionary's staff, to bring them into line with house style, and to ensure all the facts are accurate (so far as can be verified) and all the important phases of the subject's life are included. But great care is taken to retain the author's own imprint. The dictionary is a collection of signed memoirs, and the interest, especially with the recently-deceased, is often in the contributor as well as the subject. To take Oxford historians as an example, readers can consult Robert Fox on Lorna Arnold, Kenneth Morgan on Robert Blake, Paul Slack on Paul Langford, and Jinty Nelson on Jenny Wormald, among many others.

The result, however, is not just a series of authoritative lives but a body of work which, collectively, tells us an enormous amount about recent British history. Most of the recent entrants were born in the 1920s and 1930s, and were at the peaks of their careers from the 1950s through to the 1990s – though some only rose to prominence this century. Someone researching the Thatcher years, for instance, can read not only the entry on Thatcher herself, but those on many of her ministers, advisers, and opponents; someone researching the discovery of DNA can read the entries on Francis Crick, Maurice Wilkins, Rosalind Franklin, and Raymond Gosling – but also their precursors and their successors working on sequencing, cloning, or genetic engineering.

To date, the dictionary has included entries on around 3,300 people who died this century, bringing to over 63,000 the total number of biographies. This January we will be publishing 227 more. No doubt David Bowie and George Michael will garner most of the attention – but keep an eye out for the entries on Asa Briggs and James Campbell, adding to the 1,500 historians already included in the dictionary.

Members of most public libraries can access the dictionary from home for free, by signing into https://www.oxforddnb.com with a public library membership number.  The dictionary can be followed on twitter at https://twitter.com/odnb.