On the 1st May 1941, the French Jewish Scouts, the Éclaireurs Israélites de France, took part in official celebrations in front of Maréchal Pétain’s residence in Vichy. Invitations to include the Jewish Scouts in the parades had not been sent out in error. On the contrary, from its inception, the Vichy government included the Jewish Scouts, along with the Catholic, Protestant and Secular Scouting Federations, in Scoutisme Français, the regime’s only recognised scouting association. Jewish participation in Vichy’s ideological programmes was not confined solely to scouting. Rather, between 1940 and 1942, the regime invited young French Jews across the non-Occupied Zone to take part in a host of new initiatives alongside their non-Jewish peers that aimed to revive the nation in the aftermath of the national defeat to Germany.

The presence of young Jews in official ceremonies and in Vichy-inspired youth movements appears, however, in stark contrast to the now familiar images of Jewish exclusions orchestrated by the regime. Following its creation in the wake of the armistice with Nazi Germany in the summer of 1940, the sovereign Vichy government enacted a series of legislative decrees that aimed to exclude Jews from the rest of the national community. Vichy’s antisemitic legislation was entirely French and did not, as was claimed by many at the Liberation, result from German pressure. The anti-Jewish statutes of October 1940 and June 1941 removed Jews from civic and liberal professions. In March 1941, Vichy created its own Ministry for Jewish Affairs that was led by the notorious antisemite Xavier Vallat. During the course of the Occupation, this ministry developed legislation to relieve Jews of their worldly possessions and to propose further measures to marginalise them from society. As shown so movingly in the recent films, ‘Sarah’s Key’ and ‘La Rafle’, the round ups and internments of Jews intensified as the Occupation set in. By the time of the Liberation in summer 1944, France had deported more than 76,000 Jews to Nazi extermination camps in the east. 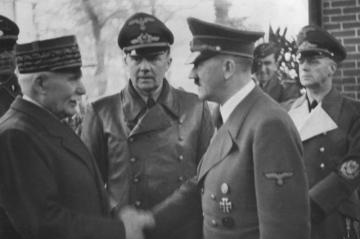 Much has been written about French Jewry’s ordeal during this time. Hitherto, the themes of persecution, resistance and rescue have dominated historical enquiry of Jewish life under Vichy. According to existing scholarship, there was little space for diversity in Jewish reactions to Vichy and in Vichy’s reaction to the Jews. Jews, we are told, reacted as victims to the new regime, while most people at Vichy, it is argued, were in agreement that the exclusion of the Jews was a priority. That Jewish scouts paraded at Vichy more than six months after the first anti-Jewish laws were passed appears, therefore, to contradict recent scholarship that emphasises the regime’s antisemitic agenda. If antisemitism was omnipresent, what explains the Jewish scouts’ inclusion? Why weren’t they in hiding?

This question, and others like it, underpin my work. My research challenges the 3 canonical prisms of persecution, resistance and rescue. It argues that such ways of analysing the relationship between Vichy and the Jews can only go so far and leaves many things, such as young Jews’ inclusion in some of Vichy’s official projects, unexplained.

Understanding why the Jewish Scouts were invited to take part in official celebrations at Vichy makes sense when thinking less about victimization and more about cooperation and common ideas. Scouting, communal work and outdoor living, lay at the heart of the Vichy project of a National Revolution that aimed to rebuild the nation through rural and traditional values following defeat to Germany. But scouting and the manual trades were also very important to Jewish groups in France who, through a commitment to Zionism, and long before Vichy came to power, placed a return to the land at the heart of its ideology. Vichy’s zeal to marginalize Jews from the rest of the population was, therefore, complicated by its priority of national rebirth that did not initially seek to exclude Jews wishing to contribute.

The Nazi victory in June 1940 and the creation of the État Français did not sever the links between France and its Jewish citizens. At first, Jews, like large swathes of the population, sought to test the waters and to identify various ways through which to play a role in the New Order. The inception of the regime led by Pétain, France’s most popular marshal, the revered victor of Verdun, was something new and unimagined. A blueprint for radical change was not rolled out immediately in the summer of 1940. On the contrary, Vichy’s initial phase was dependent on improvisation and compromise. Despite the passing of the anti-Jewish statutes, for the first eight months of the regime, no government agency existed to ensure that the antisemitic directives were ever enforced. Instead, the many strands that made up the civil service were left to interpret the laws independently. The priorities amongst technocrats, political idealists, and religious leaders differed immensely. The exclusion of Jews from the nation was not at the top of everyone’s list.

During the first two years of the Occupation, Jewish youth did not adopt a single, static reaction to Vichy. Instead, young Jews interpreted the racial laws in multiple ways depending on their profession, their place of residence, and their level of involvement with Jewish communal institutions. A section from Roger Stéphane’s diaries, written in the non-Occupied Zone as late as June 1941, shows that to identify the enemy was not as straightforward as it may seem. The reactions of young Jews were never obvious or predictable:

While Vichy indisputably passed legislation that aimed to remove Jews from the state sector and to reduce their number in universities by enforcing a numerus clausus, not all avenues were closed to Jewish youth. What is more, the projects of Vichy and those of Jewish youth could even, on occasion, go hand in hand. This is demonstrated above all by the desire of some Jewish youth to create a New Jewish Man, and to forge a space for its own return to the land project, under the auspices of Vichy’s National Revolution. 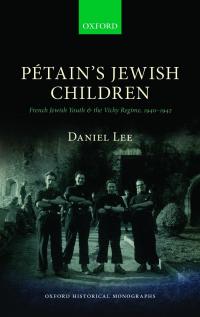 they believed had plagued interwar French life by implementing their ideas on rural, community and, above all, Jewish, study and living. In the summer and autumn of 1940, the Jewish scouts launched a series of agricultural communes across the non-Occupied Zone, the largest of which was situated at Lautrec (Tarn). Lautrec aimed to turn Jewish youth into self-sufficient producers. Set in 75 hectares, the Jewish scouts spent their days attending to livestock, tilling the land and becoming rooted in it. Lautrec sought to instill in Jewish youth a love for the land, Zionism, and Jewish spirituality. Young Jews, nestled in an isolated community far away from their pre- war lives, became immersed in a new way of life where Judaism played a constant and decisive role. During the war, more than 200 ‘pioneers’ lived at the commune for sustained periods. This experiment of manual work chimed with Vichy administrators, and for a time it appeared that the two projects could coexist. Long after the anti-Jewish laws were passed, Lautrec continued to receive government funding and equipment.

While hindsight may see Vichy’s willingness to accept Jewish participation in some of its schemes as contradictory, this was not how it appeared at the time. Even though for some ministers, such as the Minister for Jewish Affairs, antisemitism dominated his ministerial briefing, for other ministers, notably the ministers of Youth and Agriculture, the racial laws usually played second fiddle to their priority, which was national reconstruction following the catastrophic defeat to Germany. In the period 1940–42, instances arose in which the racial laws actually interfered in the way in which the ministers of Youth and Agriculture sought to run their departments. For example, at a time of crisis in French agriculture after the defeat, it was essential for Pierre Caziot, Minister of Agriculture, that Jews wishing to return to the land should not be prevented from doing so by the racial laws. Caziot noted that reducing the amount of land upon which Jews were entitled to work ran counter to the best interests of the nation. For Caziot, the Jewish Question was entirely separate from the agricultural domain. Crucially, when the anti-Jewish agenda came head to head with questions of National Renewal, Vichy antisemitism did not always triumph.    Similarly, Jewish life at this time should not be read with the benefit of hindsight. Despite the later resistance activity of many French Jews in the years 1942–44, large numbers of Jews in Vichy’s initial phase sought to coexist with the new regime. Their attachment towards French institutions, society, and culture had developed over generations and could not disappear overnight. What is more, many French Jews recognised that antisemitism had come and gone before in the past. It was not obvious to them that this time should be any different, not least because most believed that the racial laws were the result of German pressure. The experience of the Jewish Scouts and its commune at Lautrec provides a powerful example of how the regime’s priority of national renewal could take precedence over its other priority of antisemitism; something previously thought impossible, because of the existing structures used to explore the relationship between Vichy and the Jews.

The emergence of Vichy did not signal the ‘beginning of the end’ for all Jews in France in the years 1940–42. During this time, French Jewish youth sought in multiple ways to negotiate its relationship with the new regime. In the regime’s first two years, while ambiguity reigned, possibilities for adjustment and compromise endured and Jews were constantly presented with new avenues to probe and explore. It was not obvious to young Jews that the closing of one door marked the closing of all doors. After this point, the drastic policy changes fuelled by Prime Minister Pierre Laval and the head of Vichy Police René Bousquet, coupled with the total occupation of France by German forces in November 1942, reduced the possibilities for coexistence almost to nothing.