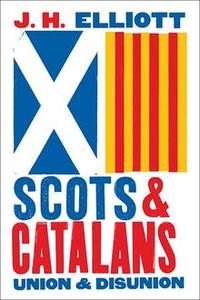 Last year I published Scots and Catalans. Union and Disunion, a comparative history of Scotland and Catalonia, running from the Middle Ages to December 2017, when Carles Puigdemont, the president of the Catalan government, went into self-imposed exile in Belgium.  Do Scotland and Catalonia have anything in common, and, if so, is it significant enough to justify a sustained comparison covering five centuries or more? These are questions that some reviewers have asked, and similar questions were asked after I published in 2006 Empires of the Atlantic World, a comparison of the British and Spanish empires in America.

I can well understand the doubts of reviewers about the value of comparing nations that seem to them incomparable. Indeed I hesitated before deciding some five years ago to embark on yet another comparative exercise.  It is, after all, not one to be entered upon lightly, requiring as it does a mastery of the histories and historiographies of two or more nations and societies.  In my own case, I was well acquainted with the history of early modern Catalonia, on which I did my original research in the 1950's. On the other hand, where Scotland was concerned I shared the lamentable ignorance of Scottish history that is to be expected south of the border. Serious immersion in the history of Scotland was therefore bound to be a demanding commitment, even if it was made enjoyable by the high quality of so much Scottish historical writing in recent years.

I have, however, had a long-standing interest in the possibilities of a comparative approach to the past. This interest arose from my engagement, as a British historian, with the history of Spain and the need to explain it to an international readership.  Native Spanish historians, obsessed with the age-old topic of ‘the decline of Spain’, were programmed to see it as a purely national phenomenon, whereas, coming from outside, I was struck by the similarity between certain features of the Spanish experience and parallel features found in other seventeenth-century European societies. I therefore instinctively resisted a narrative written in terms of Spanish exceptionalism, and looked out instead for the commonalities wherever I could find them.

These earlier experiences with a comparative approach persuaded me that it could do something to reduce the parochialism that afflicts so much of the conventional scholarship surrounding the rise and development of nation-states. In writing comparative history, however, it is essential to find a common starting-point. On the surface, the historical trajectories of Scotland and Catalonia are profoundly different, but I was struck when looking for a new subject in 2011-12 by the simultaneous upsurge in both countries of radical nationalist movements demanding nothing less than independence. How had the current situation developed, and could a historian add something to the largely a-historical analyses of the political scientists?  Scotland and Catalonia have a shared characteristic in being self-proclaimed nations without states of their own. This realization gave me a point of entry, and I was not unduly troubled by the fact that there were so many obvious differences between the two. For Marc Bloch the identification of difference is no less valuable than the identification of similarities. Both call for explanation, and the search for explanation can in itself raise new and important historical questions and promote new research.

As I delved deeper into reading and thinking about the historical trajectories and experiences of these two countries for a book that I planned as a largely chronological narrative interspersed with analysis, it became clear to me that over the centuries there were striking points of convergence followed by no less striking points of divergence. There was an important difference from the first in that Scotland developed as an independent kingdom in the early Middle Ages, whereas Catalonia, first as the County of Barcelona under Frankish lordship, and then as principality forming part of a larger political entity, the Crown of Aragon, was never an independent sovereign state. At different moments, however, and in different ways, there was a partial convergence between their two histories when they became constituent parts of two composite monarchies, those state systems so characteristic of early modern Europe and formed by a combination of dynastic union and dynastic accident.  Catalonia became part of the new ‘Spain’ created by the terms of the marriage agreement between Isabella of Castile and Ferdinand of Aragon in 1469. Scotland, for its part, became one component of the new ‘Great Britain’ formed by the accession of James VI to the English throne on the death of Elizabeth I in 1603.  Both, although keeping their own laws and institutions, now found themselves joined to overbearing neighbours, Castile and England respectively.

In both countries the uneven nature of these relationships gave rise to mid-seventeenth-century rebellions that offer interesting points of comparison, but the first two decades of the eighteenth century were a time of convergence and divergence that set the future course of both countries. The Anglo-Scottish Union of 1707 turned Britain into a parliamentary composite monarchy, whereas the imposition in 1714 of ‘New Plan of Government’ on a rebellious Catalonia marked the end of a process by which the Bourbons replaced the composite monarchy of the Spanish Habsburgs with a system based on the exercise of  authoritarian kingship.  I have tried to follow the consequences and implications of these transformative decades over the following three centuries, always seeking to identify points of similarity and difference which I hope will be found suggestive. The imperial project, for instance, bound Scots into the Union in a way that it did not bind the Catalans. By way of contrast, language became the essential point of reference for modern Catalan nationalism, whereas Gaelic remained marginal to the Scottish nationalist movement.

How far such comparisons illuminate the current upsurge of independence movements in Scotland and Catalonia is for readers to decide for themselves. But I would hope that they at least serve to provoke thought and even perhaps to suggest possible ways forward. Beyond this, I would hope, too, that the book will be seen as a contribution to the wider debate about the origins and nature  of nationalism, in so far as it draws attention to nationalism’s many-sided character and the way in which it can wax and wane in response both to general trends and specific circumstances. There are no easy answers as to why this should happen, but a comparative approach to two incomparable nations has offered me, at least, new insights into a complex phenomenon that defies all attempts at neat categorization.