Hunger Draws the Map: Blockade and Food Shortages in Europe, 1914-1922

This three year collaborative project brings together specialists working on different countries affected by the First World War to examine the impact of food shortages on European societies during the conflict. It will consider both the causes and the consequences of reduced food supplies in various regions of the continent. Our goal is to compare levels of hunger and responses to it during and immediately after the war across the continent. Local studies on hunger during the war exist but a truly transnational project will provide a much more global picture of the phenomenon. 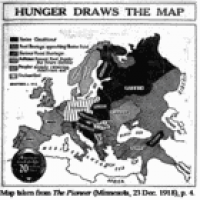 Major economic strain occurred in the countries involved with the First World War - not least due to shifts in trading partners and patterns, the British Blockade, and extensive physical destruction. As the War continued, many people across Europe, and even parts of the Middle East and Asia, struggled to survive with a reduced food supply. State rationing programmes were eventually introduced in all the major belligerent countries other than the United States. Severe malnutrition and near famine in regions of Europe were reported as negatively affecting both soldiers and civilians during the conflict. But were these stoppages enough to constitute real hunger and famine, or were the effects of blockade and other disruption to the normal food supply minimal and manageable by the various populations? How far did political expediency match civilian deprivation?

This research project will examine various responses to hunger within Allied, Central, and neutral countries from 1914 to 1922. Further, the project will use surveys, reports, and other records to assess actual levels of hunger and famine in these disparate nations. Finally, and uniquely, this research project will make meaningful comparisons of hunger levels, and the responses of governments and civil societies, between these various countries. Our network gathers specialists of occupied territories (Belgium), neutral countries (the Netherlands), the Central Powers (Germany and Austria-Hungary) and new states emerging after the war (Poland, Czechoslovakia, Latvia) who work with disparate sets of historical sources to analyse the consequences of hunger.

Professor Sir Hew Strachan, Dr Claire Morelon, and Dr Mary Elisabeth Cox are leading this project, with Hew Strachan serving as the Principal Investigator. Sir Hew Strachan is one of the world’s leading experts on the First World War. He is an Emeritus Fellow at All Souls College, University of Oxford and Professor of International Relations at the University of St. Andrews. Of his many publications, his most recent include The First World War: Volume 1: To Arms (2001), The First World War: an illustrated history (2003; related to a multi-part television series and translated into many languages), Clausewitz’s On War: a Biography (2007), and The Direction of War (2013). Sir Professor Hew Strachan has received many honours and recognitions including, and served in many different capacities. He is a member of the Chief of Defence Staff’s Strategic Advisory Panel, the Defence Academy Advisory Board, and the Council of the International Institute for Strategic Studies. He has served as a specialist advisor to the Joint Parliamentary Committee on the National Security Strategy in the recently dissolved Parliament. He is a Trustee of the Imperial War Museum and a Commonwealth War Graves Commissioner, and serves on the both the United Kingdom’s and Scotland’s national advisory panels for the centenary of the First World War.

Dr Claire Morelon is Junior Research Fellow in the History of the Great War at The Queen’s College, University of Oxford. Her research focuses on daily life in the Habsburg Empire during the First World War and in its immediate aftermath. She is currently preparing her first monograph entitled Streetscapes of War and Revolution: Prague 1914-1920. She has published articles and chapters on refugees during the First World War, the Habsburg war effort, and the urban-rural divide.

Dr Mary Elisabeth Cox is a William Golding Junior Research Fellow in the Arts, Humanities, and Social Sciences at Brasenose College, Oxford, and a Visiting Fellow at the Hoover Institution, Stanford University. Her research focuses on the health, hunger, and inequality of civilians during the First World War. Her first book, ‘Hunger in War and Peace’ is forthcoming from Oxford University Press as part of their Historical Monograph Series. She was the 2016 recipient of the Alexander Prize from the Royal Historical Society for the best published article in any field of history by an early career historian.