Early in the New Year, the Faculty was shocked to learn of the sudden death in post of Hubert Stadler, its Graduate Officer, and one of the longest serving members of the admin team. Since 1997 he had provided invaluable counsel to successive Directors of Graduate Studies, and some 4,000 students passed under his watchful eye. As we came to terms with his passing we remembered his endearing idiosyncrasies: the colourful waistcoat often implausibly combined with jeans, the ruminative cigarette breaks, his curious dietary habits revolving around bananas, chocolate, and salami;  his exotic but slightly archaic vocabulary in which words like ‘flummoxed’ and ‘flabbergasted’ featured regularly; his vivid  expostulations (Oh Bloody Hell!) usually delivered in the face of some new Microsoft outrage; the waving arms when he was really, really cross; the curiously Austrian syntax of his minutes; and the endearing vulnerability in the email signed ‘Panicking Hubert’. All this we have recalled with wry smiles and pleasure. But many of us realised how little we really knew about this complex character, at once a rebel and a conformist. 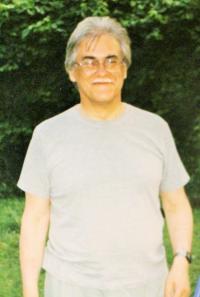 Hubert Markus Stadler was born on 11 October 1948 in Obervellach, a village in the Molltal valley in Carinthia, in the southern Austrian Alps. His family circumstances were modest; his father Markus was a construction worker and his mother Katrina a postwoman. Carinthia was pretty conservative and his mother was deeply pious, so Hubert was destined for the priesthood, and undertook training with the Jesuits in Munich. He liked to refer to this as his ‘sturm und drang’ phase, recounting with relish how he would let rip with the communal moped at such speed that it needed repair after each occasion he used it. There was a romantic attachment, and he was attracted by radical politics; by his own account, he even spent some time in a post 1968 commune.  So, he abandoned hopes of entering the priesthood. He remained fascinated however by the Catholic Church. There were plenty of irreverent stories such as his snacking on communion wafers as a schoolboy. He looked on papal politics from the perspective of someone who believed that the last legitimate pope was the antipope Benedict XIII. The Great Schism lived on in the Graduate Office.

He retained his interest in theology and philosophy, and eventually began work in 1970 on a doctorate at Ludwig-Maximilians Universitat in Munich on the subject of Dante’s De Monarchia, completed in 1975. After finishing the Munich doctorate Hubert worked in publishing and he completed a couple of handbooks, one on Popes and councils, another on Luther. He somewhat quixotically determined on another doctorate, this time at Oxford, matriculating at Corpus in 1984. Karl Leyser was designated as his supervisor, but it was not a meeting of minds, rather the clash of two mighty Germanic temperaments, and David D’Avray, now at UCL, took over. His thesis – it had to be an M.Litt. because of funding problems - was on the psalm commentary of  Nicholas Trivet, the fourteenth century Dominican, and a leading Hebrew scholar, apparently still the best thing on the subject.

He hankered for an academic career, and for a while in the early 1990s he was a presence on the academic conference circuit, applying for jobs, and occasionally making it to the short list.  But the academic career was not to be. One assumes he was pretty low in spirits. In 1996 he secured a job as a porter to the History Faculty, a post ‘grotesquely beneath his capabilities’ as the then Administrator remarked. It was Cliff Davies who realised  that Hubert was one of the few people in the building with any IT savvy, and within a year of his arrival he was plucked to become part-time secretary to the DGS; within eighteen months the post was full time. And from there began the building of Hubert’s graduate empire.

He was not an Administrator like any other, hating the label of ‘bureaucrat’. Outwardly pretty irreverent towards the University, he shared the scepticism of academics about the creeping managerialism of ‘Wellington Square’, but that concealed a profound respect for the University’s core values. He enjoyed the human comedy of the History Faculty, and developed a pretty shrewd sense of the strengths and weaknesses of academic colleagues, inevitably getting on with some better than others: ‘why can’t the ones I don’t like be undergraduate examiners?’ was a regular lament. His sense of priorities was sometimes idiosyncratic, and the Office had an improvisational quality. There was also a streak of ‘obstructive perfectionism’, which might lead to decisions being put off. His office manner could be somewhat grouchy; he worried that if he appeared to be too nice to the graduates, they’d never be out of the office. His relationship to IT was likewise profoundly ambivalent. The man whose favourite screen saver was Bill Gates washing Windows, remained ever inventive in solutions to IT issues; and he loved testing the University systems to destruction.

But Hubert was above all an absolutely dedicated servant of the Faculty, working Stakhanovite hours and coming in regularly on Sundays.  For all that he might have seemed grouchy, the office door was always open, and he would go to great lengths to help students in difficulty.  It wasn’t an empire he created, it was a refuge.  He was never really at ease with the wider world; perhaps that streak of youthful idealism had been dashed by bitter experience. He remained devoted to his mother who died only a few years ago, and he continued to make regular visits to the home of his youth. But it was the Faculty that provided the basic framework for Hubert’s sociability. It’s often said that DGS’s went native, that none of us were able to reform his quirky ways, and that we all became his inadvertent champions. That’s probably true: in part because I think few realise the scale of the operation he supervised, but it’s also because I think we came to appreciate Hubert as a warm and sympathetic human being, someone we came to count on not only as a wise counsellor but as a friend.

The View from the Chair

During his first year in office as Chair of the Faculty Board, Martin Conway reflects on recent changes and the aims of the Faculty

The English People at War in the Age of Henry VIII

Following the success of his Ford Lectures in 2015, Steven Gunn discusses what effects Henry VIII’s wars would have had on the English population at large

Empires of Faith: interactions in art and religions of Late Antiquity across Eurasia

Rachel Wood discusses the ‘Empires of Faith’ project, which will be working with the Ashmolean Museum on an exhibition from October 2017

Now that the first phase of her research project is complete, Joanna Innes discusses the changing meaning and understanding of democracy throughout history

From Byzantine to Ottonian Empires: Venice, Ravenna and Rome

Following the recent release of his book ‘Pétain’s Jewish Children’, Daniel Lee explains how Jewish Scouting groups were involved with the Vichy Regime

Alex Middleton examines the careers of two Early Nineteenth-century British Imperialists, and their relationship with the domestic politics of the day

Adrastos Omissi discusses the importance and meaning of Vasari’s masterpiece

Thinking With Food: The Welcome Rise of Food History