Since the seventeenth century a growing body of advice literature, educational treatises, parenting manuals and policy documents has been encouraging parents to play an active part in the education and instruction of their children. Yet because the focus of historians and policy-makers has been on the development of institutional instruction, and on the role of the state in education, the history of this domestic learning has been neglected. New research on the history of the book and the history of childhood, and on the history of literacy, however, reveals the significance of domestic instruction among middle- and upper-class families in the late eighteenth century, and the importance of home learning and self-education for the children of the working classes in the nineteenth century.  Current educational studies have also drawn attention to the role of home and family in education, noting the impact that family culture can have on educational outcomes.  The number of children being educated primarily at home is growing, rising in the UK from about twenty families in 1977 to 80,000 families in 2009.

This book seeks to extend our understanding of the history of education beyond the school walls, both as a philosophy and as a practice.  It draws on evidence from fiction, from book history, from advice literature, from prison records, memoir, correspondence, and diaries, to shed new light on home education in Britain from the late-eighteenth to the early-twentieth centuries. In the process, it demonstrates the continuing importance of the education offered at home even as institutional provision was expanding.
Focusing on home education in Britain offers insights into ideas and practices of domestic instruction that were particularly influential and enduring.  While the nineteenth century saw the gradual expansion of school provision and the professionalization of teaching, in England and Wales, this process was slower and more complex than in France, Germany, or the USA. It was not until the Forster Act in 1870 that anything like a system of elementary schooling for the working classes was established in England and Wales, and only in 1902 that secondary schooling was systematically provided and funded. And yet, literacy rates were as high as 60% in 1833 well before the Forster Act. Such figures testify to the longevity of a vital educational culture that did not depend on formal schooling.  Instead, differing ideas and practices of home education competed with, co-existed with, and complemented, institutional instruction.

The late eighteenth century saw the articulation of a confident philosophy of home education.  From the 1760s, theorists influenced by Rousseau had begun to develop new 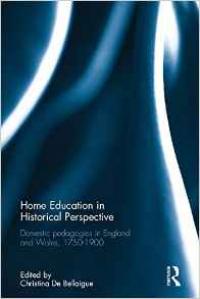 progressive methods emphasizing child-centred learning and questioned what was taught in contemporary schools. Michele Cohen’s work on the pedagogy of conversation, research by Matthew Grenby on the use of children’s literature in the home, and by Katherine Halsey on the representation of domestic instruction in Romantic fiction, all shed new light on this important movement. Such ideas were principally directed towards the middle and upper classes, who might have the luxury of choice in determining how their children should be educated. However by the beginning of the nineteenth century, arguments about the need for an education that would shape national character undermined those in favour of the individual approach. A growing number of voices began to argue that school education was necessary - particularly for middle-class boys - who needed to leave the feminine domestic world and to experience the rigours of institutional life in order to achieve manly independence. The home was losing its legitimacy as a source of education. Even in the 1880s and 1890s, however, as my work on Charlotte Mason demonstrates, significant numbers of elite parents were drawing on eighteenth-century models to educate their children at home, choosing something other than the dominant public-school model.

For many families lower down the social scale, however, the question of choice was moot. Rosalind Crone’s work on modes of learning in the working-class home in the nineteenth century, and Gillian Sutherland’s analysis of self-education in the lower middle class at the turn of the nineteenth century suggest that those with fewer resources needed to make the most of what was available.  From the 1780s, growing numbers of working class children were attending Sunday Schools, private working-class schools, and the expanding body of religious establishments. Working-class families were keen to use schools where they were available: evidence from prison records suggests that those who were literate had usually attended school. By the late nineteenth century, mass schooling was fully established; however, this did not preclude educational activities in the home.  The late nineteenth-century saw large-scale engagement in efforts for self-improvement of the kind engaged in by Ruth Slate and Eva Slawson, the subjects of Sutherland’s analysis. Thus more than 20,000 students were enrolled on the Oxford University Extension lecture courses in 1890-1.

Examining ideas and practices of home education in the past, then, reveals that instruction at home formed part of the varied educational itineraries of children of all classes in the past, and continued to be significant even after development of mass and compulsory schooling. Rather than seeking to set up dichotomies between home and school and between formal and informal education, it is more fruitful to think in terms of the individuals experiencing a range of educational environments and influences along a spectrum of formal to informal.  Exploring the history of domestic learning also emphasizes the narrowness of twenty-first century conceptions of education. As Crone comments, the domestic curriculum could be usefully defined to include ‘learning to crawl or speak, developing an awareness and later knowledge of identity and community, and cultivating and expanding the imaginative faculties’. Similarly, home education might be defined to include occupational training. Charlotte Mason’s conception of the educational work done by parents was also broad, incorporating the training of habit and character, nutritional choices, physical education, as well as activities more conventionally defined as educational.  These expansive definitions undermine the modern notion of education as synonymous with schooling and propose a more flexible and inclusive conception of instruction and learning.  They suggest ways in which we might try to begin to expand twenty-first century understandings of education, and to do more justice to the educational work done by agencies beyond the school, and by parents of all classes and cultures.

Home education in historical perspective: domestic pedagogies in England and Wales, 1750-1900 is published by Routledge