The arrival of Gender and women’s history has been the greatest development in the discipline of history since the Second World War. Those are not my words – they are those of David Cannadine, the new President of the British Academy. It has overturned how we think about everything.  I’m a historian of Martin Luther – whose 500th anniversary is this year. How could gender possibly be relevant to writing on a theologian, a sixteenth century reformer like Luther, you are probably thinking? But it is. 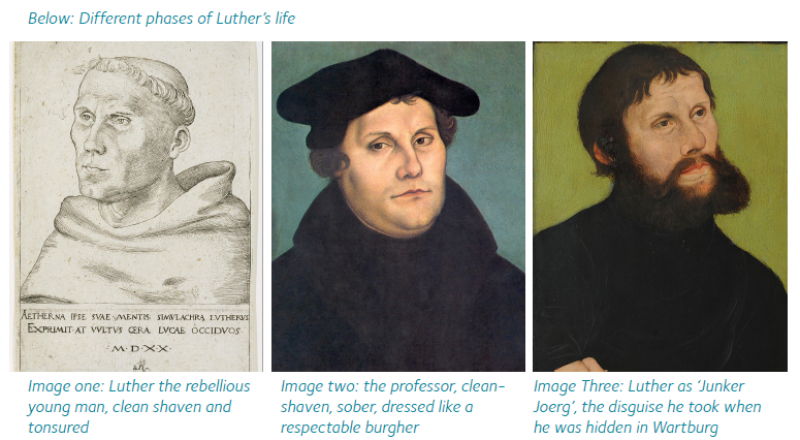 These three images of Luther show different phases of his life. The first shows Luther as we probably remember him most, Luther the rebellious young man, clean shaven and tonsured, as befitted the Augustinian monk (he had a rather large tonsure which he got very badly re-done) . On the right, we have Luther as ‘Junker Joerg’, the disguise he took when he was hidden in Wartburg to save his life after he was declared an outlaw and heretic at the Diet of Worms. What Luther did next was to grow his hair: out with the tonsure, as well as a beard and moustache. This was noble manhood, the clearest statement that Luther was now a layman. And in the middle we have the look that Luther finally adopted: the professor, clean-shaven, sober, dressed like a respectable burgher, and with hair, but not too much. No longer a celibate priest, Luther is a father. The reformation brought about a transformation in religion. It also brought about a transformation in what it meant to be a man. Gender can transform how we think even of an event like the Reformation.

I want to convince you today that gender history is central to how we think about the future of our society, and that Oxford has a role and a duty to foster the development of its study.

The rise of women’s and gender history has coincided with the arrival of women in positions of economic and political power. Think of your own mother, and the future she imagined for herself. Think of your daughters: the difference in expectations tells you everything. It shows how important history is and how, within the space of just three generations, things can change.

Women’s history in this country began, in a sense, at Oxford, when the first women’s liberation conference was held at Ruskin in 1970. At this time, and out of this ferment of ideas, Sheila Rowbotham wrote her Hidden from History. Three hundred years of Woman’s Oppression, published in 1973. It was a book that came out of her experience of studying fir a degree in history at Oxford, and her frustration that women were never mentioned. So Oxford has a very particular place in the tradition of writing gender and women’s history.

When I was a student, I could not have applied to any of the three Oxford colleges where I have since worked. I couldn’t have applied to them as a postgraduate either. Mine was the first year that Rhodes scholarships were open to women. When I started as a Junior Research Fellow at Merton in 1983, I was the only woman in the Senior Common Room. All that is unimaginable now. I’m sure, many of you would agree that having a more equal workforce, with women and men, has immeasurably changed our working lives for the better. It’s not just women who benefit from opening up senior positions to them, it’s men too.

We are now at an exciting historical moment. The women who were the first to enter the male colleges at Oxford and Cambridge are now in their fifties, and reaching the height of their careers and next year it will be a century since women won the vote. So this is an ideal time to be thinking historically about what all these changes mean. History, is a really helpful way of opening these questions up.

The Faculty of History at Oxford is absolutely outstanding. It isthe biggest in the UK and one of the largest in the world. But big reputations can be big burdens.  Oxford labours under the perception of outsiders that it is very conservative and that it isn’t open to new questions. This makes it hard to attract some of the best and brightest of the coming generation of graduate students, who think a place like Oxford is not for them. But in fact we have a huge range of scholars who work on such varied topics as global history, women’s and gender history, Race history, as well as all kinds of areas which you might not necessarily associate with Oxford. It is nothing like the place where Sheila Rowbotham did her degree.

Recently, I’ve realised how closely my own historical interests have followed these general social changes. Back in Australia I started out as a historian of women: I did so because I was deeply annoyed that in the course I did on the Reformation, the only week on Women was devoted to witches. Surely, I thought, this wasn’t all. Didn’t the closure of convents, the abolition of prostitution, the elevation of marriage as the only proper role for women, matter too? I determined to go to Germany to find out what difference the Reformation made to women’s position in one regional area and I ended up by spending a good decade working on the city of Augsburg.

Women’s history as I did it then is certainly not what it is today.  When I got interested in women’s history, it was all about uncovering women in the past: discovering, for example, that there were women travellers who went on their own to Surinam, or finding out about a woman in the sixteenth century who dressed as a man and served as a soldier in the armies of Philip II of Spain ; that in the medieval period in Europe women ran businesses and headed workshops. Or it was about uncovering those who fought for suffrage or were active in the Irish nationalist movement. Women, it seemed, had never been confined to the household or excluded from the world of work.

Then we started to realise that the challenge of women’s history was much bigger and much more ambitious. It wasn’t just about women’s history but about gender, relations between the sexes. Historians started to see that gender could be applied to all areas of history. It was much more than just women’s history. You could bring a gender history perspective to bear on the history of war,  on politics and kingship, as well as on revolutions. Gender history entered the historical mainstream. It was about power and about how sexual difference was constructed, through language and through a series of social behaviours. In short, through what we learned from the French philosopher Michel Foucault to think of as ‘discourse’. What did it mean, for instance, to talk about the rise of democracy and the rights of the citizen, if you didn’t look at how the very idea of political participation was constructed in the seventeenth and eighteenth centuries as male? Gendered political history was about far more than when women won the vote.

It was about this time that Christopher Hill, the Marxist historian and Master of Balliol, asked Olwen Hufton, then Professor of History at Reading University and an upcoming historian of women, what the difference was between sex and gender.  I can’t remember how she explained sex to him, I think she might have said that it was what he had and she didn’t, but she told him that gender was the reason she would never be master of Balliol. How times change. This was the high water mark of gender history, the 1980s and early 1990s, when it seemed that if we could understand how gender was created, then we could change it. 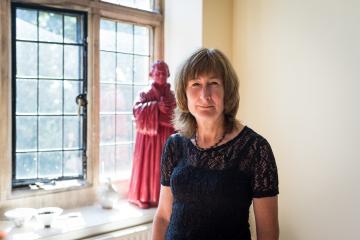 Where is gender and women’s history today? My own experience of teaching has been that in the 1990s and in the first decade of the 21st century, students were very reluctant to see themselves as feminists; they felt equal to men and didn’t expect to face disadvantages because they were women, a confidence that has stood them in good stead. My students today, men and women, are very different. They have grown up in a world of economic downturn, where arriving at university means incurring a stack of debt, and where they know that any career they might have will be full of insecurity, and won’t be a job for life. They are passionately interested in inequality, and in its historical roots.

There is a return to the questions of women, economics, and power that animated the first gender historians. And at the same time, the new generation has a very different approach to gender identity. They see it as much more fluid. They don’t think in terms of two sexes and they have raised a whole set of new questions about sex and gender. They are making me see the sixteenth century differently too. They have shown me how to think of Luther as a reformer who could not bear gender instability, whose preferred polemical mode was to insult the Pope as a hermaphrodite, Pope Paula the Third – that was the worst thing he could think of.

At Oxford gender and women’s history is now fully part of the curriculum. That’s as it should be, in the place where women’s history-writing in this country began. There is a vibrant group of historians who would describe themselves as gender historians, and we have a group called CGIS, the Centre for Gender, Identity and Subjectivity, in which we work together. I am the first woman to hold a Regius Chair in History, anywhere in the British Isles – incredible, that it should not have been until 2011 that a woman was appointed.