Our focus for 2017 has been on providing support for Graduate Scholarships. The funds we have raised have already been set to good use, providing life changing support for some of our most talented scholars. In partnership with Keble College, we have used some of the funds to support The Eric Stone Graduate Scholarship, which commemorates the medievalist Eric Stone, who was Tutor in History at Keble from 1955 to 1991.

The Hubert Stadler Fund is a fitting tribute to our long-serving Graduate Officer, Hubert Stadler, who died suddenly in January last year. Since the Fund was launched in March 2016, over 70 donors have given almost £30,000 in gifts and pledges. This generosity has enabled us to create a new graduate scholarship, in partnership with Corpus Christi College, the Hubert Stadler Scholarship. We are also pleased to report on the success of The History Tomorrow Fund, which has been set up to transform the support we can offer to our students; helping the Faculty to support History students from across the University. Since the Fund was launched in January 2017, nearly 200 donors have given over £70,000 in gifts and pledges.

We have also been able to commit further funds towards a scholarship at Pembroke, which will start in the 2018/19 academic year, and will be paid to allow the student to do extended research and outreach work with potential applicants.

Alice Raw is the recipient of the Hubert Stadler Scholarship. Her research seeks to recover the discourses of active female sexual desire in late medieval England, testing the hypothesis that sexuality was not the secret source of identity decoded by Foucault: rather, it was public, confident, and politically charged. Her forays into representations of medieval female agency present an innovative approach to gender as a category of analysis.

Alongside achieving a Distinction for her MSt in Medieval History, completed at Jesus College, Oxford, in the past year she was shortlisted for the highly competitive All Souls Examination Fellowship, and invited to present a paper at the Early Modern Colloquium Interdisciplinary Graduate Student Conference at the University of Michigan.

Alice is a vocal advocate for curriculum reform to remove gender bias, and has been involved in the designing of new outline papers for undergraduates. This Michaelmas she will be interviewing for undergraduate admissions, and organising a lecture series collaboration between graduates at Corpus Christi and Oriel. She has also undertaken a Research Assistant role at Worcester. In this capacity she is currently assistant editing Between Heaven and Earth: Law, Ideology and the Social Order in Late Antiquity, ed. Kate Cooper (Cambridge University Press, forthcoming 2018).

Alice is thrilled and honoured to be the first recipient of this scholarship, and is deeply grateful to the donors who have made possible the next step in her academic career.

Ryan Asquez is the first recipient of the Eric Stone Graduate Scholarship. He is originally from Gibraltar and attended school there until his A-Levels in 2012. He also spent his gap year there student teaching before flying over to the United Kingdom to begin his BA in History at the University in East Anglia in September 2013. He passed his BA with a First, and read for his MSt in British and European History at Saint Anne’s College in Oxford last year, passing with a Distinction. 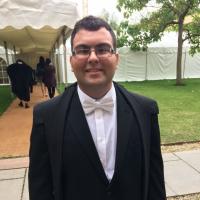 Ryan's DPhil research project focuses on images of the suffering Christ across Western Europe between 1450 and 1550. He is analysing this image across several media – wall paintings, icons, print, jewellery, and coins, among other objects – and how it was used in both public and private devotion and as a means of defining pious and communal identities in the late medieval and Reformation eras. In order to keep track of and analyse the data he has found, with the help and advice of his current supervisor Lyndal Roper among others, created an Excel database in which these case studies will be catalogued. This is a project which Ryan began during his MSt year, when he was solely focused on printed images of the suffering Christ. Through the catalogue, the case studies have been boiled down to a series of data – iconographies and regions of production and use of the image, for example – which can then be analysed in order to identify patterns and trends. By the end of the MSt, he had catalogued 100 images from England, Spain and the Holy Roman Empire. This something that would not have been possible before, as the digitisation of library and museum collections has allowed for systematic searches of online databases and remote access to texts which are in foreign repositories. With a much wider and deeper focus and range of case studies (both in terms of geography and material), as well as a whole new set of research questions, he will now be using this catalogue to break down and analyse the Christological material culture of the period under study.

In his words: ‘Your sponsorship means the world to me – it means that I am able to continue working on this project without having any concerns about funding. This is really important, as your support has allowed me to continue with my work and take it to the next level. I am extremely grateful for this, and I really appreciate your kind and generous sponsorship.’