Gandhi Against the Human Race

The language of anti-colonialism has historically been dominated by a desire to acknowledge the humanity and therefore equality of all peoples, its critique often turning on the threat imperialism posed to the lives of its subjects. Even those labeled by colonial powers as revolutionaries and terrorists, after all, tended to excuse their violence as temporary, and dedicated it to recovering the equal value of all human lives. Gandhi, however, perhaps the most important figure in anti-colonial history, disagreed with this line of thinking. Not only did he understand claims to speak on behalf of the human race as being historically and necessarily imperialist, but argued that the value they put on human life was itself a cause of violence. This paper explores Gandhi’s anti-humanistic thought as part of anti-colonialism’s self-critique, and its effort to exit the epistemological closure of imperialism. 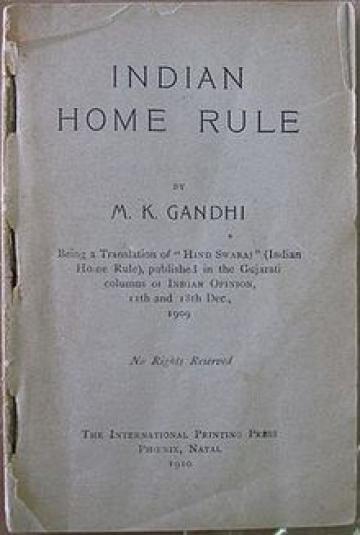 While Gandhi spoke frequently about humanity and humanitarianism, he was deeply suspicious of any attempt to serve or even speak in the name of the human race. In Hind Swaraj or Indian Home Rule, his manifesto from 1909, he wrote, “I am so constructed that I can only serve my immediate neighbors, but in my conceit I pretend to have discovered that I must with my body serve every individual in the Universe. In thus attempting the impossible, man comes in contact with different natures, different religions, and is utterly confounded.”[1] Gandhi considered the effort to address mankind as a whole fundamentally violent, and often described it as a sin. This was because man’s universality could only become manifest by destroying the social particularities that both obscured and made it possible.

Despite his criticism of mankind as an object of humanitarian care, it remained the vacillating subject of Gandhi’s final sentence cited above, one “confounded” by the differences it was meant to subsume. It is as if once brought to light, mankind had come to assume an existential reality that might be incomplete but could not simply be wished away. While the speaking subjects in Hind Swaraj, as well as the neighbors it referred to, retained their singularity in the Mahatma’s text, they could only confound mankind as a generic object of compassion but never a subject in its own right. These singularities, therefore, had to be reduced to particularities and suborned by the universal imperative of mankind. The question before Gandhi was how to engage this universality while refusing to be subordinated by it.

It was the singularity of one’s neighbors whose moral and political precedence Gandhi thought was especially compromised by mankind’s universality. Not that he held neighbors to be worth more than strangers in the sense of favoring them. For like friends and relatives, they were also the first to be opposed when doing wrong, this being the true lesson of swadeshi or a preferential concern with one’s surroundings—whose virtue could only go abroad by serving as an example but not instruction to others. Apart from being doomed to failure, Gandhi recognized any attempt to grasp the human race beyond one’s neighborhood as being a product of modern civilization and its obsession with technology. This was why he expressed his distrust of mankind in a passage on the evil of railways and the hubris of power and expansion they created.

As a critic of modern civilization, Gandhi objected to its desire for universality. Of this the social or political instantiation of the human race, envisaged either in its potential control by some institution, no matter how representative, or by its own domination of the world, provided an important and to him fearsome example of despotism. While such universal ideals as humanity, and others like freedom were enthusiastically taken up by many anti-colonial thinkers, in other words, the Mahatma focused instead on their darker aspects and links with imperialism, which he considered the most important political manifestation of the technologically-driven urge to universality in his time. And yet he refused to become a partisan for the particular either, recognizing it as a category dependent upon the universal and so partaking of its logic.

Gandhi approached the universal in a negative way, by refusing it any positive identity that might be colonized by some group or another. Such was the status of his key concept of ahimsa or non-violence, for example, whose explicitly negative character entailed, among other things, the presumption that it could possess no history. For as the Mahatma noted in Hind Swaraj, only violence had a history, not simply because it tended to constitute the subject of most historical narratives, but also because it was a category invariably linked to positive objectives if not identities. But it was non-violence that in Gandhi’s view existed everywhere and did the work of sustaining families, societies and indeed the world, not the violence whose aim could only be that of safeguarding certain individuals, peoples or states at the cost of others.

Yet non-violence could not be understood as universal so much as ubiquitous, since it had no positive character. It was in this sense non-universal rather than particular or singular, and could not be reduced to positive categories or particularities. The Mahatma’s consistent deployment of negative concepts, of which non-cooperation was another, signaled that he was doing the reverse of defending any specific or even singular Indian trait. Instead of succumbing to some European idea of positive universality, or claiming to fulfill it as both nationalists and socialists often did, he took the historical air out of the universal and rendered it a negative or deferred notion. He was interested in what I am calling the non-universal.

If it was to be non-universal, humanity had to be defined in negative rather than positive ways, and this meant discarding both the biological and intellectual categories that conventionally described its universality. Of these the most important was life itself, and I want to conclude this chapter with an example of the way in which Gandhi criticized it. Early in July of 1937, a well-known Nazi journalist, SS officer and advisor to Hitler named Roland von Strunk visited Gandhi at his ashram in Segaon. As befitted a National Socialist concerned with the cultivation of a nation’s health and power, Captain Strunk was interested in the Mahatma’s criticism of machinery and modern medicine. In the course of their conversation, Gandhi pointed out what he thought was the fundamental contradiction in the attention that Europeans paid to the preservation of life:

But the West attaches an exaggerated importance to prolonging man’s earthly existence. Until the man’s last moment on earth you go on drugging him even by injecting. That, I think, is inconsistent with the recklessness with which they will shed their lives in war. Though I am opposed to war, there is no doubt that war induces reckless courage. Well, without ever having to engage in a war I want to learn from you the art of throwing away my life for a noble cause. But I do not want that excessive desire of living that Western medicine seems to encourage in man even at the cost of tenderness for subhuman life.[2]

Having expressed his horror of the hatreds sweeping Europe, the violence of Spain’s civil war, in which he had participated on the side of Franco, and even what he said was the “overdone” targeting of Jews in Germany, Strunk must have been surprised to hear that Gandhi was in some ways even more contemptuous of life than Hitler. For the Mahatma’s desire to learn from the “reckless courage” of European warfare was not in the least premised upon the need to protect one’s own life, nor indeed the lives of one’s countrymen, racial brothers or partners in civilization, as was true both of the Nazis and their enemies. 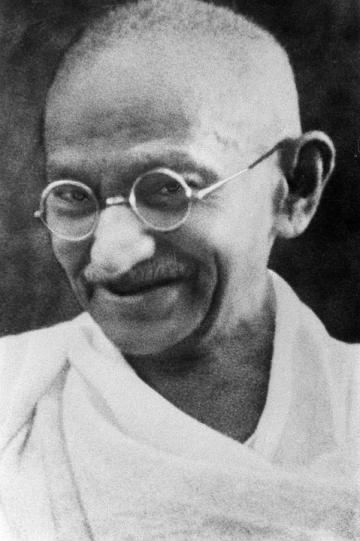 In fact, Gandhi was clear that justifying war by means of the conventional link between taking life in order to save it could in no sense be considered rational. What the Mahatma found disturbing, in other words, was not that an inordinate concern with preserving life stood opposed to its casual disposal in battle, but rather that one led to the other in such a way as to make the love of life itself guilty of the desire for death. Only by giving up the thirst for life that was represented in modern war and medicine alike, he suggested, could the urge to kill be tamed.

From the kind of “subhuman life” that modern medicine sacrificed in its vivisections, to men and women rendered “subhuman” and thus available for fascism’s killing machines, Gandhi blamed humanity, or at least its definition in terms of life as an absolute value, for the massive scale of modern violence. And this not only allowed him to put the Nazis in the same category as their enemies as far as the espousal of such a value was concerned, but also to hold humanitarians and pacifists equally responsible for its violence. Indeed in some ways those dedicated to the cause of peace and humanity were even more culpable than the rest, if only because they might value life in far greater measure than others who were at least willing to sacrifice it in war.

For in the very recklessness of this sacrifice the Mahatma saw the possibility of going beyond and even destroying life as an absolute value. The kind of violence that entailed risking one’s life, in other words, was capable of providing an opening for nonviolence, something that preventing war in the name of life’s sanctity never could. And this was why Gandhi wanted to learn the art of throwing one’s life away from those parts of European warfare that still involved such risk. As if convinced by the Mahatma’s words, Roland von Strunk died in Germany a few months later, the casualty of an old-fashioned duel fought with pistols, which resulted in Hitler banning the custom altogether.

It was only by refusing to treat life as an absolute value that Gandhi was able to accomplish his aim and spiritualize politics, for he thought that as long as life remained its basis, political action could never answer to moral principles. After all the preservation of life was an aim that all political actors shared, and therefore no moral principles could be drawn from it, these having been reduced merely to second-order justifications for valuing some lives over others. The courage of a Nazi, for instance, would be deemed in this way to possess less value than that displayed by an American or Russian soldier fighting him, but only because it was dedicated to taking life for an immoral cause.

The paradoxical thing about the Mahatma’s glorification of sacrifice in the name of an ideal rather than a gross reality such as life, however, is that its rejection of this reality as an absolute value also entailed protecting it. Only by disdaining life could it be saved, while even politics in its most sacrificial forms, including the Cold War doctrine of “mutually assured destruction,” continued being devoted to life’s preservation.