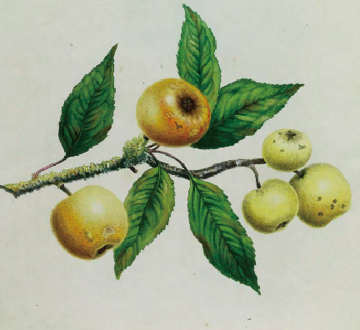 An illustration of the ‘Golden Pippin’ from Knight, Thomas Andrew. 1811. Pomona Herefordiensis; Containing Coloured Engravings of the Old Cider and Perry Fruits of Herefordshire with Such New Fruits as Have Been Found to Possess Superior Excellence. London: Printed for the Agricultural Society of Herefordshire.

The last few decades have witnessed increasing alarm from scientists from numerous areas of research on the climate and sustainability, particularly on the lack of action and response we have made to rising crises. The threats facing us today are unique and unprecedented, but the failure of cultivated varieties and crops has been a constant, global threat throughout history. While largely forgotten, during the early nineteenth-century many scientific authorities in Britain became convinced that staple varieties of British agriculture were facing an imminent die-off in the near future. They were wrong on crucial details, but their efforts to draw attention to an impending crisis and the response they received help provide historical context for our own time.

During the French Revolutionary Wars, the president of the Royal Society, Joseph Banks, was hoping to gain a better understanding of Britain’s agricultural output. In the 1790s, no one knew exactly how many people were living in Britain, and there weren’t any available statistics on its food production, either. Through his network, Banks was put in touch with a wealthy farmer in Devon named Thomas Andrew Knight. Like many of his neighbours in Devon, Knight kept apple orchards, and relied primarily on older varieties of apple, like the ‘Golden Pippin’.

About the same time as Banks made contact with Knight, Britain experienced a very harsh winter during which many of Knight’s apple trees died. After assessing the condition of his neighbour’s farms, Knight became convinced that Golden Pippin trees had suffered particularly badly. Whereas many of Knight’s peers merely witnessed the unfortunate effects of a harsh winter, Knight believed that the harsh weather and the loss of trees were actually not connected. The trees were failing, Knight believed, because most of the varieties cultivated in Britain were older varieties. The crisis wasn’t confined to fruit crops like apples and pears: Knight believed that older varieties of potatoes and wheat would also, over time, reach the end of their natural lifespans.

To avert disaster, Knight urged Britain’s farmers to set aside land for the cultivation of new varieties. Leading by example, Knight introduced many new varieties himself (not infrequently bearing his name). When he became president of the newly-established Royal Horticultural Society (RHS) in 1811, Knight used his position and the influence of the Society to continue urging farmers to dispense with using older varieties. Knight went so far as to publish an illustrated guide to the fruit trees of Britain, Pomona Herefordiensis, that included illustrations of diseased older varieties, highlighting their blemishes and signs of age. He also placed greater importance on importing new varieties from America for introduction in Britain. Until his death in 1838, Knight maintained that older varieties were more likely to harbour hereditary diseases and more likely to fail during poor weather. And despite the apparent health of many trees, numerous farmers appear to have heeded Knight’s warnings. While we don’t have statistics on the relative number of fruit trees cultivated in Britain in the early nineteenth century, agricultural periodicals during the early nineteenth century contain numerous observations that many farmers were refusing to cultivate the older varieties that Knight had identified as near the end of their useful life. 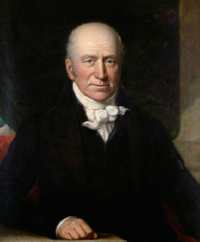 Gradually, physiologists and agricultural scientists challenged Knight’s ideas and rejected the idea that cultivated varieties ‘age’ in the way Knight believed. But his warnings were remembered throughout the century. During the Great Famine in Ireland, many writers recalled Knight’s warnings that the varieties of potato cultivated in Ireland and Britain were unreliable and would tend to deteriorate. In the decades after the famine, a debate reopened over whether or not older varieties were more prone to disease and rot than more recently cultivated varieties. Years later, when Charles Darwin was writing The Variation of Plants and Animals Under Domestication in the 1860s, he didn’t reject Knight’s ideas outright, but suggested the cultivated plants, over time, might lose their fertility and ability to survive changes of condition.

While Knight was wrong about the immanent disappearance of Britain’s apple varieties (the Golden Pippin, which he thought would fail in his lifetime, is still widely available in Britain’s nurseries), Knight perceived that there was a real need for communication between scientists and farmers. Using the publications of the RHS, Knight argued that famine would befall the country in the near future unless its farmers recognised that science could uncover agricultural practices that took advantage of physiological laws. If Britain’s farmers carried on as they had before, ignorant of plant physiology, he maintained that they would blindly lead the country into agricultural disaster.

Particularly relevant for today is the reception that Knight’s warnings and ideas had during his lifetime. Many writers championed his calls for reform in farming, stressing the national interest, but his authority was hotly contested by rivals. In the 1820s, the gardening magazine editor James Loudon repeatedly attacked Knight and the Royal Horticultural Society in the pages of his own publications, and many farmers complained within the periodical press that authorities like Knight were interlopers with no practical experience or knowledge of farming.
As the environmental sciences and the conservation movement find themselves facing perennial public scepticism and challenge, there is a real opportunity for historians of heredity and researchers working within the environmental humanities to produce research that helps us to understand the longer history of the role played by the public not only in debating and contesting scientific authority on the environment, climate, and the use of natural resources, but also the special role long held by the public in contributing to scientific understanding of reproduction and adaptation.