This lecture investigates the role played by people at different stages in the life cycle in the making of England’s long Reformation. It tests suggestions that the successive phases of religious upheaval precipitated by the ecclesiastical upheavals of the 1530s, 40s and 50s entailed forms of youthful rebellion and analyses the reversals of the age hierarchy to which these revolutionary events appeared to give rise. It examines age as a stage of spiritual growth as well as a biological phase and explores the role of education and conversion in the Reformation. It also considers some of the paradoxes of youth and age in a society that distrusted novelty and revered antiquity and engages critically with the idea that the authority of the old was steadily eroded in the course of the sixteenth and seventeenth centuries.

This lecture explores the extent to which England’s long Reformation was a family affair. It investigates the role of both kith and kin in the religious developments that fractured a Christian Church that had long conceived of itself as coterminous with society itself. It examines the revival of household religion and its role as both a bulwark and challenge to the ecclesiastical and political status quo. It shows that the Reformation served simultaneously to foster the creation of devout families and to spawn movements and groups that described themselves as the children of God – associeties of sisters, brothers, cousins and friends. It will also contest the suggestion that the religious developments of the sixteenth and seventeenth centuries were corrosive of ties of spiritual kinship and contend, on the contrary, that in complex ways they were reinforced by the advent of Protestantism.

This lecture focuses on the themes of ancestry and genealogy. While the fascination of the Tudor and Stuart elite with questions of lineage, birth and descent has received much attention, its connection with the religious impulses and upheavals of the era has been comparatively neglected. It will be argued here that the biological and spiritual, dynastic and confessional dimensions of this enterprise must be assessed in tandem. The lecture investigates the interweaving of biblical, secular and polemical genealogy and suggests thatgenealogical thinking stretched far more deeply and further downwards into English society than has hitherto been recognised. In the process, it hopes to shed light on contemporary assumptions about sex and original sin, pregnancy and childbirth, and race and heredity. A further aim is to underscore the value of writing a social and cultural history of religion with the theology put back.

Taking issue with the thesis that generational consciousness is essentially a product of more recent modernity, this lecture contends that a consciousness of being part of an historical or chosen generation was one of the byproducts of the English Reformation. It examines the implications of the pervasiveness of the biblical language of generations and seed in early modern thinking and probes what this reveals about senses of group identity derived from a shared location in time. It investigates the various ways in which religious change engendered senses of belonging to a particular cohort of people bound by common experience and how it altered how people understood their relationships with past and future generations. It also examines the pressing questions that devout people from all denominations faced about the spiritual fate of their dead relatives and about how to ensure the salvation of their children and heirs.

This lecture takes its bearings from the observation that in early modern England generation was often understood as a unit of historical chronology. It examines the development of official and alternative histories of the Reformation before considering the processes by which contemporaries came to think of the Reformation as a past event rather than an unfinished and ongoing development. It explores the naming and dating of the Reformation and assesses how senses of religious change, upheaval and rupture contributed to creating enduring models of periodization, as well as to altering how sixteenth- and seventeenth-century society comprehended the passage of time. It will also engage with influential claims about the nature and transformation of both modes of historiography and regimes of temporality in this era.

The final lecture examines memory and its transmutations over the course of the several generations that experienced England’s long and contested Reformation. It will investigate when and why men and women sought to record the religious changes they had witnessed and in which they had participated, and the forms in which they transmitted these recollections to posterity as legacies, including written and printed texts, oral tradition, and material objects handed down as heirlooms. It will examine what they strategically forgot as well as what they remembered and how they retrospectively recast and selectively edited their own lives as their religious and cultural preoccupations changed over time. As well as engaging with recent work about early modern memory, it also seeks to evaluate the role of the family and of generational transmission in creating the very archives and libraries through which our own knowledge of the Reformation past is filtered, and the interpretative paradigms that shape how we analyse it. 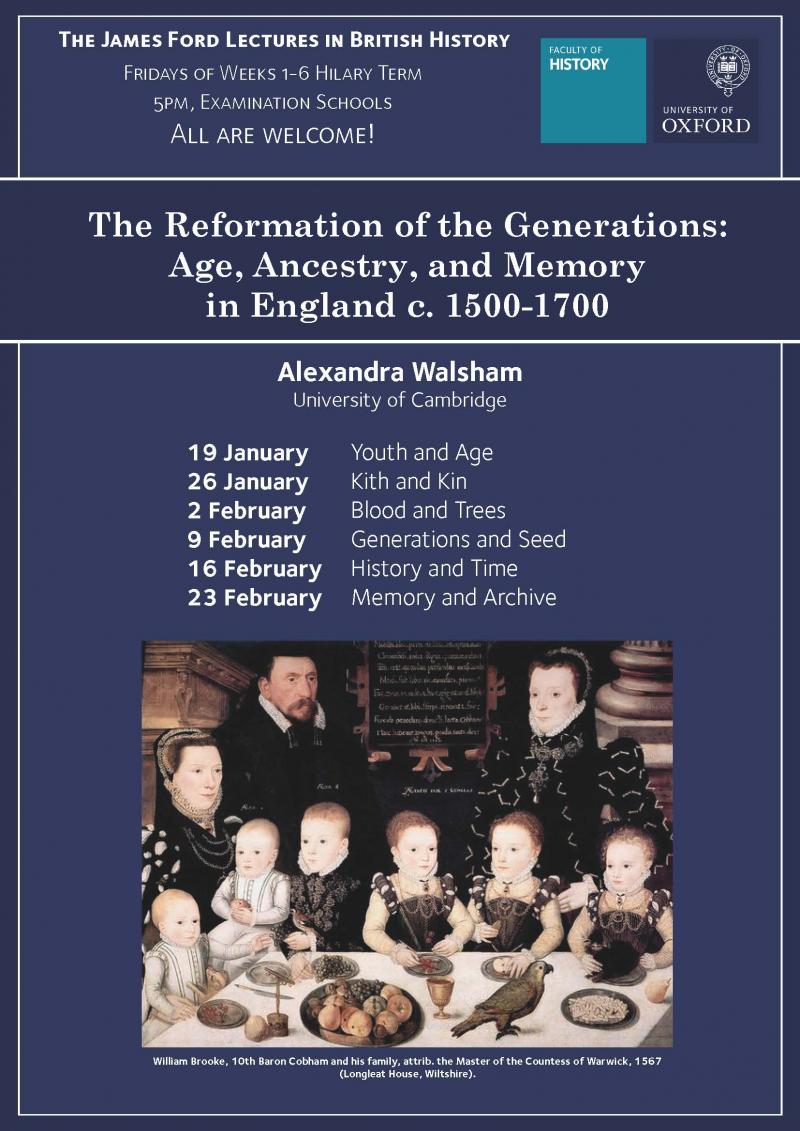