Pacification and Counter-Insurgency in Historical Perspective 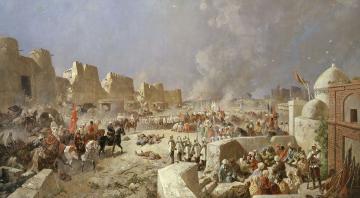 The terms ‘pacification’ and ‘counter-insurgency’ have contemporary and historical currency, but are scarcely neutral concepts. They imply studying conflict from the authorities’ perspective and can suggest that the containment or defeat of opponents is a desirable outcome. Analysis is often solution-based, examining present and past examples to inform how states and armed forces might combat opponents more effectively. However, are pacification and counter-insurgency simply the flipside of what others study as ‘resistance’ or ‘liberation struggles’? What is the dynamic between governments, armed forces, populations and other actors in these circumstances? How do the motives, strategies and practices of those involve differ between authorities confronting their own populations, and populations resisting external invasion or encroachment onto their land? Are such situations invariably bi-polar and asymmetrical, given the frequent involvement of third parties such as other states or non-state actors like humanitarian organisations? How do the differing perspectives of the authorities, their opponents, and third parties shape or dictate research methodology?

This one-day conference assesses whether the current terminology helps or hinders analysis. It will bring together historians and political scientists to foster a more holistic dialogue, and it will widen the spatial and temporal boundaries to explore these phenomena from late Roman antiquity through the wars of the French revolution, the era of imperial acquisition, twentieth-century decolonization, and modern wars of liberal intervention.

In so doing, it will address a range of themes and questions, including: does pacification have a tangible historical currency? How did the concept of emerge and how has it changed over time? Can we identify a common set of ideas and behaviours associated with it, or has its meaning always been fragmented and context-dependent? What is the relationship between pacification and notions of civilization and barbarism? What roles has violence played in theory and in practice? Can the concept of pacification explain behaviours during periods of conquest, consolidation, occupation, withdrawal, and liberal intervention? Does pacification still hold value as a lens for understanding the exercise of power in the contemporary world?

Chris Doyle (Galway) ‘The Pacifier of the World: Roman Coin Motifs as a Counterinsurgency Tactic  AD 271-275’

Christopher Tyerman (Oxford) ‘Conquest as Liberation: the Example of the Crusades’

Alexander Morrison (Oxford): '"We vent ourselves on those who should be spared". The Russian Campaign in Ferghana, 1875-6'

John Slight (Cambridge) ‘Pacification and Counter-Insurgency: the View from Somaliland and India, c.1914’

Jacqueline L. Hazelton (U.S. Naval War College): ‘A Great Country Can Have No Such Thing as a Little War: The Ideas Driving Contemporary Pacification Choices’

To register for you place:

Registration is now open and will close on Friday, 22 September 2017.

Please note: There is no registration fee and a buffet lunch will be provided.

‘The Contest for the Equal Citizenship of the Mind’: Reflections on the Centenary of Women's Formal Admission to the University of Oxford.
Microsoft Teams