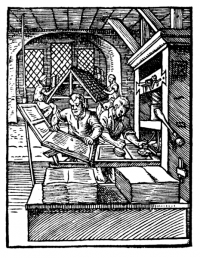 Just as the rise of electronic communication has changed our lives, so the rise of printing technology during the late Middle Ages had a profound impact on the Protestant Reformation of the early sixteenth century. This lecture will outline the general significance of printing to the process of the Reformation, and its further historical effects. Professor Kaufmann will argue, as part of a new attempt to reconstruct the events of October 31st, 1517, that the printing press stood at the beginning of Luther's reform activities in a very pronounced way. He will look at the acceleration of print that was practised in Wittenberg from spring 1520 on. He will also consider the innovative and ground breaking significance of the Reformation to the Latin-European civilization to the history of printed books and publications, including its consequences for the Roman Catholic church.

Thomas Kaufmann is Professor of Church History at the University of Göttingen and was Dean of the Faculty of Theology from 2003-2005. Since 2011, Kaufmann has been Chairman of the Association for Reformation history. He is a leading authority on the history of the Reformation in Germany and Lutheran confessional culture in the sixteenth and seventeenth centuries and his research focuses on the church, theology and history of Christianity in the Reformation and early modern period. Professor Kaufmann is the author of 16 monographs. He was awarded the 1996 Academy Prize by the Berlin-Brandenburg Academy of Sciences and Humanities in recognition of his outstanding scholarly achievements.

Image: A Printers, 1568 - At the left in the foreground, a "puller" removes a printed sheet from the press. The "beater" to his right is inking the forme. In the background, compositors are setting type.