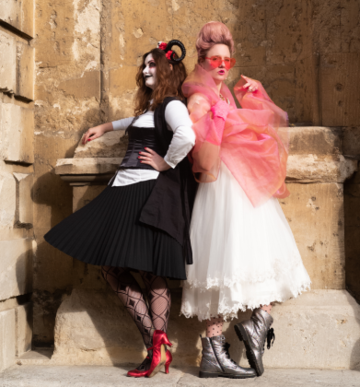 Women rarely enter the ranks of Real History. Vilified, adored and universally deprived of agency, they are wives and mothers, pawns and puppets, demons and dames. I’d like to say I always knew this. That I was a feminist historian from Day One, but I wasn’t. That, of course, is the very problem.

In my first year studying Ancient and Modern History at Oxford University, I failed to notice that every single text in our Historiography course was authored by a man (Tacitus to Weber – it’s in the name isn’t it?). It was a fact that seemed neither important nor relevant. With a focus on Ancient History – particularly Ancient Greece - an emphasis on the exploits of men seemed entirely natural and in line with the Greek’s own view of themselves. Avid discussion about the gendered narrative of history surrounded me, but I remained curiously un-gendered in my own intellectual enquiries. When delving into the European Witch Trials, for example, which would later become the focus of my undergraduate thesis, I was more than happy to believe that women were predominantly targeted in England for the same reason men were targeted in Iceland (which has a long cultural history of male sorcerers). Witch persecutions simply assumed the form that folklore dictated, and the fact that roughly 80% of those accused were women had nothing to do with gender politics.

My view of society, culture and history have evolved significantly in the 16 years since I first began studying History at Oxford. I spent much of this time in South Korea and China, where I experienced first-hand the everyday struggle of women striving for equality. Perhaps it is easier to perceive inequality in a culture outside your own. Either way, I was finally ready to apply a gendered filter to both the there and the here, the past and the present.

My friend Ashley Mauritzen (matriculated 2003, Christ Church) and I began talking about making a podcast not long after I returned to the UK in 2016. We shared a love of strong heroines, forgotten histories and, inevitably, true crime. It has taken us three years to get to the point of launching, but here we now are with Demons and Dames - a platform where we discuss the lives of women in history in their own right.

For myself, the concept of Demons and Dames came directly, and unsurprisingly, from my studies at Oxford. For my undergraduate thesis, I explored the politics behind the demonic possession cases in England under Elizabeth I and James I. I spent eight months delving into specific cases of demonic possession and how Richard Bancroft, Archbishop of Canterbury, and Samuel Harsnett, his assistant and then Archbishop of York, had worked tirelessly to stamp out the belief in demonic possession as the Catholics and Puritans used exorcisms as a form of public diplomacy. I fondly remember spending months in the Duke Humphry library looking over aged books and documents, some even hand written by the figures I was so avidly investigating (with all the joys of 16th and 17th century spelling conventions or lack thereof). Once demonic possession case stuck with me however – that of Mary Glover. The case is itself fascinating for many reasons – it led to what is often hailed as the first physiological treatise, Edward Jorden's Briefe Discourse of a Disease Called the Suffocation of the Mother (1603) and it highlighted the lengths that Harsnett and Bancroft went to disprove demonic possession cases.

What stuck with me though was not the historical significance of the case, but Mary herself. Here is a case of illness – of the mind, body or spirit – that has been written about by the greatest contemporary medical experts of the day and by historian in the 400 years after; and yet, Mary herself is voiceless. Even during the associated witchcraft trial when Mary is taken onto the stand to speak out against the women she is accusing of bewitching her, her voice is lost as she has a violent fit and is unable to answer a single question. What stuck with me was not the obsession of the case’s role within the larger church politics of the time, but an obsession of the personal. How cognisant was Mary Glover of the role she played in a broader narrative? What was her motivation? And what, whilst we are on it, did she actually do in that later life? In short, who was Mary Glover?

Demons and Dames is a podcast that seeks to answer these kind of questions. Not just about Mary Glover but all ‘notorious’ women - those famous and unknowable figures. Queens and priestesses, saints and soldiers, murderers and inventors. Women who shaped history by design or simply by being in the right (or wrong) time or place. We examine how these women were viewed by their contemporaries, and why and how their stories have been interpreted, shaped and passed down. We also laugh. A lot.

We’re beginning the podcast with the launch of two episodes focusing on two very different women. In one, I explore the life and crimes of Delphine LaLaurie, slave owner and purported serial killer of 1830s New Orleans - the epitome of evil in an evil time. In the other, Ash revels in the life of Mary Toft, who hoodwinked the medical establishment of Enlightenment London into believing she gave birth to rabbits, delving into the performative nature of Leporidae birth as a form of protest against land laws.

I am grateful to the University of Oxford and the Faculty of History for providing not just the underlying motivation for this passion project, but for the skills I developed as a student that have made the research that goes into each episode possible. Oh, and having alumni access to the Bodleian Library doesn’t hurt.